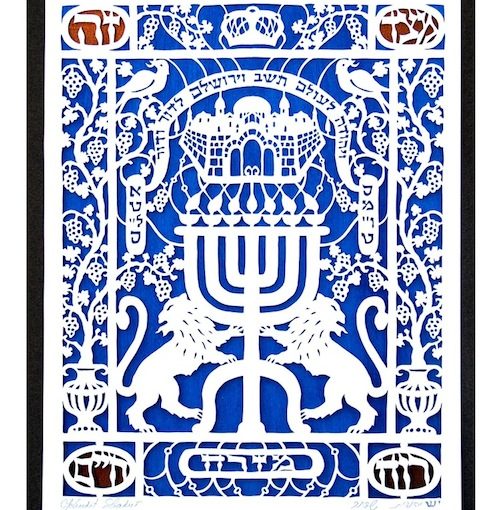 Papercuts are created by taking a folded sheet of paper and drawing a design on one side. The folded sheet is then fastened to a wooden board and the design is cut out with a sharp knife. When the paper is unfolded, a symmetrical work of art appears.

Papercutting dates back to the fourth-century CE in China. It appeared in Western Asia by about the eighth century; in Europe by the 13th century and in Turkey, Switzerland and Germany by the 16th century. Papercutting has been a common Jewish folk art since the Middle Ages and, by the 17th century, it was popular for Shavuot.

Shevuoslekh (little Shavuots) and roysele (rosettes or flowers) were used to decorate windows on Shavuot. They were made of white paper, usually, and frequently displayed the phrase, “Chag haShavuot hazeh” – “this holiday of Shavuot.”

According to an article by Sara Horowitz in the recently defunct Canadian Jewish News a couple of years ago, “for Ashkenazi Jews, there was a particular link between papercutting and Shavuot, which stems from an old practice of decorating homes and synagogues with flowers, branches, boughs and trees. In shtetl culture, cut flowers were a luxury – pricey and perishable. And Jewish culture was deeply literate, so paper, especially used paper – was always around and available for artistic repurposing. Some sources cite the objection of 18th-scholar Vilna Gaon to the Shavuot greening as another reason for the development of a Shavuot papercutting tradition. Because church décor involved cut flowers and pagan practices involved trees, the Vilna Gaon viewed such customs as inherently non-Jewish.”

An acquaintance of mine from many years ago, Yehudit Shadur (1928-2011), and her husband, Joseph, wrote a history of the last three centuries of Jewish papercutting, called Traditional Jewish Papercuts: An Inner World of Art and Symbol. The book won a 1994 National Jewish Book Council Award.

Yehudit Shadur was considered to be the one who pioneered the contemporary revival of the Jewish papercutting tradition. Her works are represented in major museum collections. She also had museum exhibits in Israel, England and the United States.

Shadur’s website offers many quotes from the artist, including one from a 1996 exhibit catalogue, in which she states, “What at first seemed a simple craft proved to be an artistic medium of endless possibilities and variations – not only in the arrangement of time-honoured Jewish symbols imbued with deep and often complex significance, but also in the challenges of colour, composition and texture. Eventually, the subject matter of my papercuts went beyond traditional forms and content to express my personal vision as a contemporary artist….”

Some typical symbols in Shadur’s Jewish papercuts – and in those of others – are menorot, crowns (keter Torah, the crown of Torah), columns representing the Temple in Jerusalem, plants or trees (the Tree of Life, the Torah), and grapevines, lions and gazelles (all representing the people of Israel).

For an in-depth article on the history of Jewish papercutting, visit myjewishlearning.com/article/jewish-papercutting.

If you’re looking for an activity to do with your children, PJ Library (pjlibrary.org) offers the book The Art Lesson: A Shavuot Story written by Allison and Wayne Marks and illustrated by Annie Wilkinson, in which “Grandma Jacobs teaches Shoshana how to make traditional papercuts,” and readers also learn to make a papercut. For anyone interested, there are various websites that have papercutting tutorials for kids and adults alike.