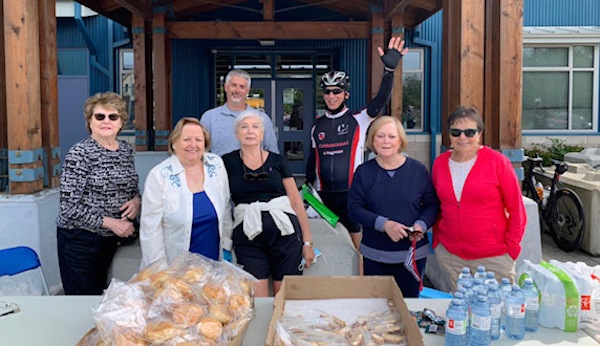 In back, left to right, are Marshal Stern and Mel Moss. In the front are, left to right, some members of the ORT committee: Marie Doduck, Mary Tobin, Bess Hirsch, Lane Stein and Beverly Pinsky. (photo from ORT Vancouver)

ORT Vancouver and Richmond Jewish Day School co-sponsored the Aug. 23 Ride for STEM (science, technology, engineering, math). They are the first Vancouver Jewish organizations to hold such an event and the donated funds are designated to students so that they have the opportunities that arise from the knowledge and skills that STEM education can provide.

ORT’s goal is to bridge the gap between ability and opportunity by providing state-of-the-art education both locally and around the world. World ORT reaches 300,000 children who benefit from STEM education in 37 countries, including here in Canada.

For nearly 140 years, ORT has been equipping people around the world with skills to succeed. The history of the organization in Canada is being celebrated at a gala luncheon next month honouring Rabbi Dr. Yosef Wosk and Shelley Lederman.

The Vancouver region of ORT began in the 1970s and was led by Lederman, who served successive terms as president of the local region and later became co-president of ORT Canada. Carrie Katz, who was Lederman’s co-president, will be the keynote speaker at the event on Wednesday, Oct. 18.

ORT (a Russian-language acronym sometimes translated as the Organization for Rehabilitation through Training) is the world’s largest Jewish education and vocational training nongovernmental organization. Beginning in Russia in 1880, World ORT now operates in 37 countries and engages 300,000 students per year. Originally focused on developing skilled trades among the people, the organization now focuses on high-tech education.

It is ORT’s origin and history – and his own family’s roots – that attracted Wosk to support the organization.

“My father’s family is from Odessa, so I felt a personal connection to the history of the organization and the people they help,” Wosk told the Independent. “Also, the appreciation for the memory of the Jewish community who would not abandon others who needed assistance.”

“What I was impressed with historically was that it’s not just giving funds,” he said. “It was also educating the people, whether in agriculture or trades and other skills, so that they would be able to eventually help take care of themselves and sustain themselves.”

Local regions, like Vancouver’s, raise funds for ORT educational initiatives in Metro Vancouver, in Israel and around the world.

When Lederman was founding president of the region, there were actually three local branches created, including a Hebrew-speaking group and a Spanish-speaking cohort.

“When people were under duress in Europe during the war and they couldn’t sustain themselves, ORT teachers taught them how to survive as tailors, electricians, as plumbers,” Lederman told the Independent. “And then, in Israel, ORT schools continue to do the same thing. They are teaching those who weren’t going to university but who wanted to come out of high school and be able to support themselves and their families. ORT schools provide education plus trade teachings.”

“It means a lot because being recognized by your friends and fellow members is really a recognition of all of us,” she said. “By recognizing one person, it’s recognizing the many people who contributed to the success of ORT in Vancouver.”

The theme of the gala is Building Minds Through Inspiration. While ORT began as an educational body teaching skilled trades and crafts, it is now a leader in high-technological training and education. Keeping with this commitment, a percentage of the revenue from the gala will support an ongoing Smart Classrooms initiative at Richmond Jewish Day School (RJDS), as well as provide scholarships for students at the Technological College of Beersheva, in Israel.

Smart Classrooms integrate learning technologies that allow increased interactivity. “The investment by ORT is about allowing Jewish day schools and Jewish schools in Israel to keep pace with technology,” said Abba Brodt, principal of RJDS. “It allows us to marry the best of educational practice with the best of technology for the best possible outcome for students.”

Without the Smart Classrooms funded by ORT, he said, “our students will get a great education but would not be as technologically literate as they should or could be, and they would not be keeping up with changes.”

The gala luncheon takes place at on Oct. 18, 11 a.m., at Congregation Schara Tzedeck. Honourary chair is Dr. Saul Isserow. Master of ceremonies will be Howard Jampolsky. Tickets are available from 604-276-9282 or [email protected].

Pat Johnson is on the organizing committee for the ORT gala.

If you know someone in the photo above or any of those below, please help the JI fill the gaps of its predecessor’s (the Jewish Western Bulletin’s) collection at the Jewish Museum and Archives of B.C. by contacting [email protected].

If you know someone in this photo, please help the JI fill the gaps of its predecessor’s (the Jewish Western Bulletin’s) collection at the Jewish Museum and Archives of B.C. by contacting [email protected].

World ORT’s Nechama Kenig, a Kadima Mada professional from Israel, was here in May with colleague Udi Gibory. (photo from ORT Vancouver)

Vancouver has been chosen by ORT Canada to introduce the ORT Israel-designed Smart Classrooms. This is a grassroots, first-of-its-kind joint venture in education between Israel and Vancouver, which is being locally implemented at King David High School and Richmond Jewish Day School.

This project provides significant educational enrichment to both primary and secondary students, preparing them for a future of technological advancements. The students have hands-on interaction with the Smart Classroom equipment and they work in collaboration with their teachers and their fellow classmates. An added benefit of the program is that students feel more positive about learning, and gain greater confidence and fulfillment from their educational experience.

A smart classroom in Israel that uses technology and expertise provided by ORT. (photo from ORT Vancouver)

ORT is an organization that doesn’t seem to register a great deal of recognition in Vancouver. It is, however, one of the largest and perhaps the oldest international Jewish nongovernmental organizations. Established more than 130 years ago in Russia (ORT is an acronym for the Russian words that translate as the Society for Trades and Agricultural Labor), ORT sought to train Jews in modern trades and agricultural practices. It established schools for technical training all over the world and currently provides technology-focused training in 100 countries. But who knew?

Vancouver ORT would like to everyone to know. In order to raise awareness of the work ORT does around the world and in Israel, Vancouver is hosting a pilot project new not only to Canada, but a first internationally. “ORT Canada has always sent support to Israel. Now ORT Israel is supporting ORT Vancouver,” said Naomi Pulvers, one of Vancouver’s longest- serving ORT volunteers.

With its emphasis on technological education, Pulvers explained, ORT Israel has developed a successful program in schools around Israel’s physical and socio-economic periphery, bringing cutting-edge educational technology into the classroom. Started in 2010 in the Galilee, the program expanded to the Negev when Israel’s Ministry of Education recognized the benefits of this interactive way of teaching. Currently, 420 classrooms around Israel are using ORT’s program.

This technology will soon be implemented in three local Jewish schools.

“We have chosen King David High School, Richmond Jewish Day School and Vancouver Talmud Torah as the recipients of a ‘smart classroom,’” Pulvers noted. “We will have to raise $25,000-$35,000 locally for each classroom.” Equipment provided includes projectors, Smart Boards, remote software, laptops, handheld slates, wireless routers and speakers. In addition, some classrooms may need to be hardwired for the technology to run. Eventually, students will benefit by having the opportunity to interact with learning in ways they not have been able to before.

The equipment provided is just one part of the program, however. The crucial element to implementing any system effectively is in understanding how to use it properly. Instruction and technical support are the other ingredients ORT provides to make this program effective.

“For the third week of May,” Pulvers explained, “two specialists from Israel, named Nechama Kenig and Udi Gibory, are coming with over 1,000 hours of experience with these smart classrooms. They will assemble what is already in the schools here and survey what is still needed. They will also give teachers more instruction, as well as the IT people from the schools.”

While here, Kenig and Gibory will also help ORT publicize its program by presenting two educational evenings intended to raise investments from local donors for what ORT sees as the future of education. These meetings, on May 20 and 21, will mark a new era in engagement and fundraising in Vancouver, targeting local Jewish education with an eye to the future.

Pulvers explained that ORT has always focused on the end goal of employment. “What kinds of jobs will be available in the future? We need technology to keep things going. In medicine, industry … they all need technology, and this is what ORT does. We help kids branch out into all aspects of technology,” through the use of smart classrooms. Evidence from the use of these technologies in Israel suggests that they boost the confidence and morale of students who have been reluctant learners or participants. Students are able to collaborate in the lesson, and with each other and the teacher, in new ways.

There is one more long-term goal, according to Pulvers. ORT has a respected international reputation and seeks to build bridges with local, non-Jewish organizations, as well. Pulvers explained, “We’ll start with Jewish schools and hopefully become a focal point of education. Eventually, looking down the road, we’d like to collaborate with the Vancouver School Board and meet with the minister of education.”

Michelle Dodek is a writer, mother and community volunteer who has been involved with many Jewish organizations in Vancouver.