The sublime thing about liberal democracies is that they are based on the rights and responsibilities of individuals rather than groups. Unlike the kind of sectarian societies imploding in civil war in the Middle East, in a liberal democracy, it is the individual who chooses to go to the ballot box (or abdicate) or to attend a protest (or go to the movies), and it is the individual who must abide by the law or face punishment.

In robust multicultural societies like Canada’s, individuals are given another opportunity – to identify as an ethnic, religious or cultural group. While these groups are considered a boon to the fabric of society, all rights and responsibilities remain solely with the person. Which is why calls for Muslims in Canada and the United States to publicly denounce acts of terrorism committed by the Islamic State (ISIS) and others inspired by them, is understandable – but ultimately wrong.

Here’s where it’s understandable. Terrorism – defined as the targeting of civilians for political ends – is morally distasteful. When committed by a fellow citizen, the action is especially corrosive, leading to distrust and paranoia. When an act of terrorism is committed by a person or group claiming to act on behalf of a particular religion, it’s tempting to want everyone else from that religion to denounce the action.

Here’s where it’s wrong. As a Jew, I regularly urge my fellow Jews to stand up for injustice as Jews, to stand up against an array of Israeli policies that I find objectionable. I encouraged my Jewish community centre (when I was a board member) to undertake staff training around LGBTQ awareness, thus enabling it to declare itself an “LGBTQ safe zone,” as facilitated by the Jewish LGBTQ organization Keshet. As a Jew, and as a Jewish columnist in the Jewish press, I stand up for religious freedom in Israel, for human rights, for an end to the occupation and for racial and ethnic equality.

But let’s recall an incident last summer with Jewish pop singer Matisyahu. Organizers attempted to ban Matisyahu from performing at a music festival in Spain unless he denounced the Israeli occupation. Matisyahu is an American, not an Israeli. His only association with the Jewish state is that he himself is Jewish.

It was a distasteful act of political theatre on the part of the organizers precisely because they drew a faulty line of logic: Israeli occupation is morally objectionable to them, so all Jews (or at least famous ones) must take a public stand because they are Jews. (After a public outcry, the festival organizers backtracked.)

In a liberal democracy, whatever collective identities we hold – sexual, religious, ethnic and so on – are the domain of the private sphere unless we choose, as individuals, to act otherwise. So, while I hope my fellow Jews will take a stand against an array of social ills, and am aware that some don’t, I would be disgusted and disturbed if, say, a work colleague or a politician or a journalist in a local or national daily were to demand that I, because I happen to be Jewish, denounce one thing or another.

The upshot? Community conversations about dynamics relating to that community are crucial to have. But they are just that: community conversations. We must leave members of synagogues, mosques, churches, JCCs and other organizations to debate among themselves whether and how to publicly denounce actions committed in their name. The pages of the community newspaper may indeed be one useful forum among many for these tough conversations.

And perhaps the Jewish community, being more integrated, prosperous and secure than the Muslim community in North America, may even serve as a model. But demanding that sort of stand taking by others in a civic forum violates the delicate multicultural balance that is intrinsic to a liberal democracy, where the individual is the only meaningful object and subject of political action.

Matisyahu, the reggae rapper whose refusal to be bullied into a political pledge resulted in his being removed from the lineup of a Spanish music festival, was eventually allowed to perform last weekend.

Global outrage over the politicizing of the musical event – and the potential whiff of antisemitism – led organizers of the Rototom Sunsplash Festival to reverse their demand that the Jewish American musician pledge support for an independent Palestine. (Not a two-state solution, mind you, or a negotiated settlement of the conflict.)

After he received an apology, Matisyahu accepted the invitation to play after all. He mounted the stage to heckles and chants of “out, out,” from multiple audience members waving large Palestinian flags.

“Let music be your flag,” he urged the audience as he proceeded with his 45-minute set, ending with a spine-tingling rendition of “Jerusalem,” a defiant anthem of Jewish survival and resilience: “3,000 years with no place to be / And they want me to give up my milk and honey,” he sang. “Don’t you see, it’s not about the land or the sea / Not the country but the dwelling of His majesty … Rebuild the Temple and the crown of glory / Years gone by, about sixty / Burn in the oven in this century / And the gas tried to choke, but it couldn’t choke me / I will not lie down, I will not fall asleep.… Afraid of the truth and our dark history / Why is everybody always chasing we?”

The incident was a nasty one, certainly, but its lesson is beautiful. Do not let bullies win, whether they attack you because of who you are or the ideas you carry. It is an issue we reflected on locally earlier this summer when outside forces attacked our community for hosting speakers from the New Israel Fund and it is an issue we face continually from the BDS movement, which, in the Matisyahu imbroglio, has shown its true colors.

Matisyahu also showed his. And it was a thing to see.

In June, the Spanish government passed a law granting descendants of Sephardi Jews forced from that country in the 15th century the right to dual Spanish citizenship.

Only someone unfamiliar with the toing and froing of Jewish migrations and expulsions could be blind to the magnificence with which this move dovetails with history. For millennia, princes and fiefs, kings and counts expelled the Jews from their realms in one generation and then enticed them back in successive ones, when their perceived value rebounded or when the duchy or kingdom was in financial peril. Sometimes it took a generation, sometimes it took 600 years, as in the case of Spain, which, it should be noted, is now just a few notches above Greece on the financial solvency scale.

But Jews who consider taking up Spain’s generous offer will be taking a sober second look after recent events. OK, the events were a relatively small-scale tempest – a reggae festival in Valencia – but the lessons are wide-ranging and deeply telling.

Matisyahu, the once Chassidic, now just Jewish, reggae rapper, was disinvited from the Rototom Sunsplash Festival after he refused to sign a pledge in support of a Palestinian state. The boycott, divestment and sanctions movement had convinced the festival organizers that participants should be forced to commit to the Palestinian cause.

The quality of the performers or the wishes of the audience were secondary to the political positions of the musicians, apparently. Why this obscure music festival should become a flashpoint for a kerfuffle over the Middle East may seem baffling, but the strategy of the movement has been to demand loyalty oaths from anyone at any time in any place. Canadian film festivals, including the Toronto International Film Festival and the Vancouver Queer Film Festival, have been roiled over the topic in the past. These efforts at a “cultural boycott” are atrocious enough, but the worst tactics of the movement promote an academic boycott, which is as close as we can come to literal book-burning.

Is it additionally appalling that Matisyahu is not Israeli, but American? Sort of. The boycotters have attacked Israelis for the most part, but now they are turning their cannons on anyone who might think that Israel has a right to exist alongside a Palestinian state. (Note that the oath did not address a two-state solution. Coexistence is not top of the agenda for BDSers.)

Not all Jews are Zionists and, indeed, some Jews support the BDS movement. However, if you believe in the right of self-determination for the Palestinian people, but not for the Jewish people, then you are at the least a hypocrite.

The BDS movement, while a relatively new phenomenon, has its historical antecedents in the people who would paint Stars of David on Jewish shop windows. It is a mob of bullies for the most part, which calls itself pro-Palestinian, but exhibits nothing positive, only hatred and vilification of Israel.

Although a reggae festival might seem an odd place to start, the BDSers and the larger “pro-Palestinian” contingent could buy themselves some legitimacy by taking an oath themselves: to work together with all people to find a peaceful resolution so that two peoples can live in coexistence in Jewish and Palestinian states. It’s a pledge the Jewish people accepted in 1947-48 and have reiterated throughout the ensuing seven decades. The Matisyahu brouhaha is an example of the answer the Jewish people have received to that olive branch.

Available Oct. 14, SISU is re-releasing the 12 episodes of the 2010-11 season of Shalom Sesame in a new six-DVD thin-pack gift box. Included in the re-release is a bonus DVD featuring two episodes from the classic Shalom Sesame series, “Jerusalem” and “People of Israel” (originally released in the early 1990s). In addition, the DVD set includes a free 30-day trial download of the first episode. 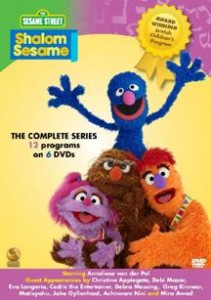 Join lovable, furry Grover and celebrity host Anneliese van der Pol (That’s So Raven, Broadway’s Beauty and the Beast) as they travel to Israel in this 12-part award-winning series co-produced by Sesame Workshop, the nonprofit organization behind Sesame Street, and Israel’s Channel HOP! Designed to help bring the vitality of Jewish culture and tradition, as well as the diversity of Israeli life, to American children and their families, each 30-minute, live-action and animated DVD focuses on storylines drawn from Jewish cultural traditions, highlighting lessons on Hebrew letters and words, unique sites in Israel and Jewish values.

In addition to van der Pol, the series features guest appearances by top name talent, including Jake Gyllenhaal, Debra Messing, Matisyahu, Eva Longoria, Christina Applegate, Greg Kinnear, Debi Mazar and others. The programs’ chronological order mirrors the Jewish calendar, beginning with an introduction to Israel and Hebrew, and ending with a program on mitzvot and a concluding trip to Israel.