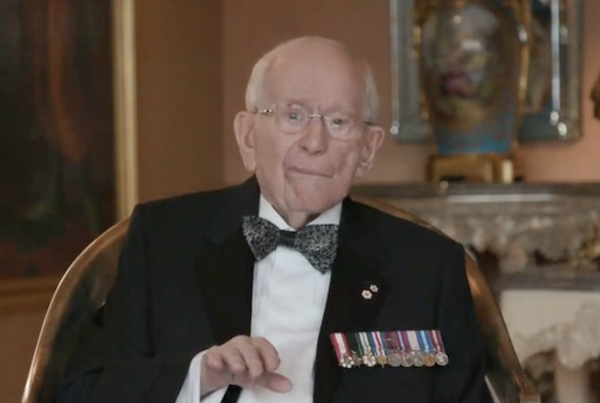 The Greater Vancouver Board of Trade paid tribute to Joe Segal on April 7, honouring him with its Rix Award for engaged community citizenship, in recognition of his many philanthropic endeavours and decades of community service.

The postponed 2020 Governors’ Banquet & Rix Awards was reimagined for the virtual gathering, which was dubbed the Governors’ Gala and Rix Awards. The event also saw the board’s Rix Award for engaged corporate citizenship bestowed on CN, and its immediate past chair, Lori Mathison – who currently serves as president and chief executive officer of Chartered Professional Accountants of British Columbia – inducted into its council of governors, along with Kari Yuers, president and CEO of Kryton International Inc. Gala co-chairs were Lorne Segal and Brent Cameron.

Born in Vegreville, Alta., in 1925, Joe Segal’s early years included losing his father at aged 14, stretches of financial hardship and hard labour building the Alaska Highway. He fought in the infantry in the Second World War, where, along with his compatriots, the Calgary Highlanders, he participated directly in the liberation of the Netherlands.

Following the war, he arrived in Vancouver with $1,500 in his pocket and set to work on more entrepreneurial pursuits. While he started small in war surplus goods, his hard work and tenacity led him to found the Fields department stores and, ultimately, take over Zellers before launching Kingswood Capital Corp., a conglomerate with interests in real estate, manufacturing and financing.

Despite his success, Segal has remained firmly grounded in the community where he built his businesses and raised his family. It is a tribute to his character that his impact and life in the city are perhaps most marked by his generosity – both with his time, as a mentor, and philanthropic endeavours.

A recipient of both an Order of Canada and an Order of British Columbia, Segal’s more recent years have been defined mainly by his philanthropy.

He served on the board and as chancellor of Simon Fraser University for six years. And, in perhaps one of his most visible contributions in Vancouver, Segal donated the historic Bank of Montreal building at 750 Hastings St. to SFU, creating a home for the Segal Graduate School of Business.

In 2010, he and his wife Rosalie donated $12 million to the VGH and UBC Hospital Foundations to create the Joseph and Rosalie Segal and Family Centre, a 100-private-room acute care centre serving the mental health needs of people in crisis. The substantial gift, made prior to mental health concerns being mainstream, is just another demonstration of his strong connection to the needs of the community. There are countless other organizations who are recipients of the Segals’ work and philanthropy.

Together with his partner Rosalie, the Segals have passed along the philanthropic genes to their children Sandra, Tracey, Gary and Lorne. The Segal family has supported mental health charities for more than 20 years. Their awareness was sparked after they were invited to attend the Coast Mental Health’s Courage to Come Back Awards, which honours individuals who have overcome major life challenges. The event has been chaired by their son, Lorne, for the past 15 years.

In a complex world, Joe Segal’s life offers a clear example for leaders today and the leaders of tomorrow. Simply put, a life well-lived will be most marked by the ways in which we give back to our community and contribute collectively towards a brighter future.

The Rix Awards are an initiative of the Greater Vancouver Board of Trade, presented in honour of the late Dr. Don Rix, who served as chair of the organization in 2008-09. Award recipients are chosen each year by a special selection committee of the board of directors, based on a number of criteria.

Watch this year’s event at boardoftrade.com/events/individual-events/1656-6471.

One hundred years of anything in Vancouver is fairly unusual. On May 7 at the newly rebuilt Beth Israel, the Vancouver Hebrew Free Loan Association celebrated the remarkable milestone of 100 years since it was originally founded.

In January 1915, the year that the Vancouver Millionaires won the Stanley Cup, a group of Jews gathered for the first meeting of the Vancouver HFLA. Designed to give interest-free loans to Jewish people starting out in the community, the association played an integral part in helping establish many early Jewish businesses and getting people settled here.

The HFLA Centennial Celebration reflected its grassroots beginning with a relaxed, different kind of evening. Casual picnic-chic décor and a picnic-style menu went with the fact that the event was held on Lag b’Omer. Greeting the guests were actors and musicians from the volunteer troupe Kol Halev. They were dressed in period costume and introduced themselves in character, sharing “their personal stories” as the founders of Jewish lending in Vancouver.

These actors provided an interactive beginning to an evening that was designed to raise the profile of HFLA. Through a multi-media approach, the event managed to educate those in attendance about the valuable role that interest-free loans play in Vancouver’s Jewish community.

The program began with a short d’var Torah by Beth Israel Rabbi Jonathan Infeld, touching on the relationship between Lag b’Omer and interest-free lending. HFLA president Michelle Dodek followed the rabbi’s comments by explaining the three objectives of the event: to raise awareness in the community by sharing what HFLA does, to honor the donors and board members who have made the work of the organization possible, and to look to the future. She recognized the multi-generational links of those in attendance, including the remarkable fourth-generation connection of the three Krell sisters (Shoshana Lewis, Simone Kallner and Michaela Singerman), whose great-grandfather, David Davis, was a contributor to the original Vancouver HFLA kitty in 1915 and served as a trustee in 1931. Their grandfather, Charles Davis, was one of the founders of the re-creation of the organization in 1979.

Guests then heard from four borrowers whose lives were changed by the loans they received from HFLA. Successful entrepreneurs Zach Berman and Ryan Slater began their business, the Juice Truck, with help from HFLA. Val Lev Dolgin used an education loan to earn her master’s in counseling psychology; she now helps children who have survived physical and sexual abuse. George Medvedev, a neurologist, shared how he and his wife, a hematologist, used a loan to help them when they first arrived in Canada from the USSR almost 20 years ago.

Another story was read by a volunteer to respect the anonymity of the borrower because of the sensitive nature of her situation, while the story of former borrower Maxim Fomitchev was shared by his friend, Tobi Lennet. Briefly, Fomitchev, a deaf mime, while touring with his troupe of mime artists from the USSR in 1991, defected, accompanied by his performing partner. The two found themselves volunteering for Jewish Family Service Agency and, within two years, Fomitchev borrowed money for a car to get from one mime gig to another. He has since achieved one of the pinnacles of success for a mime – he is the head clown in Cirque de Soleil’s Las Vegas show, Zarkana.

The evening’s program ended with the educational element of the night, the stories of four “typical” borrowers: parents of a child needing counseling, a retired woman needing dental work, someone between jobs in a stressful situation and parents borrowing to finance a modest bar mitzvah. All of these stories served to drive home the significance of HFLA.

The HFLA Centennial Celebration was a chance to celebrate a significant milestone in the community, raise awareness of an organization that is “the best kept secret” in Vancouver while recognizing donors and volunteers who make it all happen. The message for the future is that HFLA is looking for borrowers. For more information on how to apply for a loan, to watch the HFLA video or to find out about how the organization works, check out its newly revamped website at hfla.ca.

When Vancouver-based philanthropists Rosalie and Joe Segal announced a lead gift of $12 million towards a new centre for mental health, I felt deeply moved. I had had occasion to visit a loved one at the old facility a few years ago. By any measure, it was a depressing, dilapidated and lifeless space. The new facility promises the kind of physical atmosphere of compassion and dignity so necessary to recovery.

The planned $82 million centre is slated to open in 2017. In recent Globe and Mail coverage, a reporter asked Joe Segal what brought them to this latest philanthropic decision.

I’ll depart here for a moment to mention that there is a common journalistic convention whereby the writer introduces a quote by paraphrasing. In this case, the reporter said that the Segals’ decision “came from a place of empathy.” Then came the actual quote from Joe Segal: “You have an obligation, if you live in the community, to be sure that you do your duty.”

Are empathy and duty the same thing?

The two vantage points at first seem quite different. Empathy is about actually experiencing the plight of another. There is clearly an affective component. Duty somehow feels more legalistic, perhaps even at odds with emotion. As philosopher Immanuel Kant famously said, “Duty is the necessity to act out of reverence for the law.”

If empathy is more about feeling, experience and emotion, and if duty is more cognitive and legal, it seems we need to be concerned with how to summon both values across society. I turned to colleagues to help me better understand the relationship between the two concepts. For some, a viscerally emotional connection between the two is indeed present.

International theory scholar Daniel Levine points out that, for a sense of duty to function, citizens need to feel reverence for institutions, even those that we ourselves have created. Or, perhaps having created laws and ways of living for ourselves is precisely what motivates a sense of duty, “we revere it precisely because it’s ours; we are the sovereign,” Levine suggests. “We are free because we legislate and judge for ourselves.”

For professor of Jewish philosophy Zachary Braiterman, the cognitive and emotional elements are intertwined, “duty has an affective element, an excitement of the senses around a task at hand.”

And, for Jewish filmmaker Eliyahu Ungar-Sargon, “duty flows from empathy, in that moment when I connect the suffering of another to my own experience and that touches a kind of primal anger which motivates action.”

In Jewish tradition, philanthropy – or tzedakah – is considered a legal imperative. The Hebrew word itself shares a root with righteousness and justice, and it does not contain the affective aspects that the Greek-based word philanthropy does, meaning love of humankind.

Empathy in general seems to be less obviously discussed in Judaism, until one realizes that the Torah’s golden rule – “Love your neighbor as yourself” – is ultimately an empathy imperative.

When it comes to mental illness, it’s especially important to keep both duty and empathy in mind. Empathy can be extra hard to summon towards those who are in the throes of the disease. Some forms of mental illness cause sufferers to refuse treatment. Some victims act socially or otherwise inappropriately. Sometimes the sufferer no longer even seems like the actual person.

The Segals are clearly aware of how insidious and invisible mental illness can be, and the challenges around recognizing it and treating it. As Joe Segal told the Globe and Mail, “Mental health was under the rug, and we tried to lift the rug so it can become visible.”

It’s a powerful reminder of how empathy and duty are important elements in building a better society – both for helping those in personal crisis and for enabling us all to live the values of kindness, generosity and compassion.