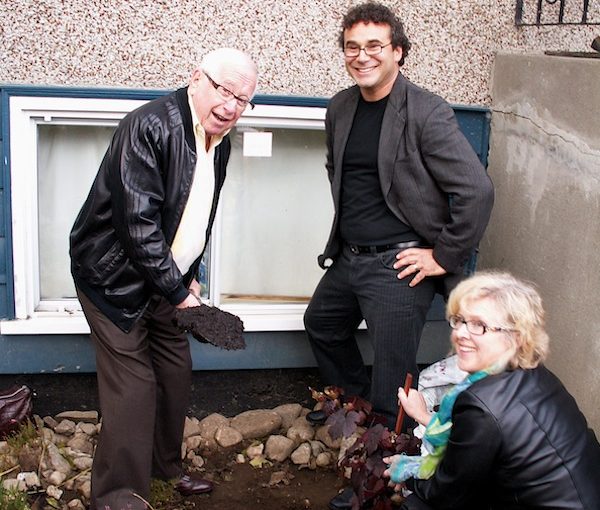 Joseph Segal plants a fruit tree with Yaffa Housing president Avie Estrin and Tracy Penner, back in 2010. Says Estrin: “Like a tree bears fruit only when properly nurtured and cared for, so too must we take responsibility and care for the most fragile and vulnerable amongst us, if we are to be healthy and fruitful as a community.” (photo by Susan J. Katz)

Until the final hours of his life, Joseph Segal was continuing a life of philanthropic engagement. On the weekend before his passing, the 97-year-old Segal had a meeting with Avie Estrin, president of Vancouver Yaffa Housing Society, of which the Segal family are leading supporters.

According to Estrin, in that meeting, Segal “reiterated his commitment towards helping bring Yaffa House the profile and community support he understood was so necessary and deserving.”

Vancouver Yaffa Housing Society group homes provide food, shelter, programming and on-premises support, within the context of Jewish traditions, culture and practice, for up to 18 Jewish adults struggling with mental illness. Segal’s backing of the organization goes back to the beginning.

“Joe was always a great supporter of Yaffa, right from the early days when my father Aaron Estrin (z’l) met with him in 1999 to discuss a capital campaign to raise the money to build the very first Yaffa House,” Avie Estrin said. “Even after his death, Joseph Segal was true to his word. Rabbi [Andrew] Rosenblatt’s eulogy reminded us of this in Joe Segal’s final wishes: that the Jewish community recognize Yaffa Housing Society’s work, and donate to our cause. While we have lost a great friend and supporter in the passing of Joseph Segal, he will always be remembered as the catalyst for our first house, and a champion for our mission.”

Segal’s support helped Yaffa through its entire history, not least in recent years, when the pandemic added hurdles to the delivery of service.

“Because kosher meal provision is so central to maintaining the Jewish aspect of our home, it was a terrible blow to our operations when we suddenly lost our arrangement with the Louis Brier Home and Hospital in January 2022, after 20 years’ cooperation,” Estrin said. “Fortunately, we were able to cobble together a new arrangement whereby JFS’s [Jewish Family Services’] Kitchen provides two wonderful meals per week. Café 41, along with L’Chaim Adult Day Centre, have been generously preparing subsidized meals the rest of the week. Our small band of volunteers pick up the meals from these different meal providers and bring them to Yaffa House every day. It goes without saying, we can always use more volunteers.”

The organization is also seeking new board members, including a treasurer.

Yaffa Housing has a permanent contract with Vancouver Coastal Health to provide funding to staff the facility part-time, said Estrin. “But we still depend on donations and community support to supplement this. Frankly, it’s not enough. Jewish Federation has been indirectly contributing to Yaffa House’s staffing the last several years but it’s very difficult to plan into the future without knowing for sure those funds are going to be there the year after next.”

Yaffa has no paid staff other than a 20-hour-a-week in-house mental health support worker.

“We have no budget for an operations manager, executive director, or weekend or evening staff,” said Estrin. “In the end, it comes down to our volunteer board to pick up the slack, but it’s wearing. As Yaffa has grown and matured over the last two decades, so too has our board. In fact, one of Yaffa’s original founding board members still actively serves on our executive – my mother, Tzvia Estrin, I am very proud to say. But the old guard can’t forever sustain Yaffa’s daily operations and a paid management is long overdue.”

Estrin said the organization is vital for the community.

“Yaffa is unique in so far as it represents the only dedicated Jewish mental health group home in Canada, west of Toronto. Over the course of more than 20 years developing our in-house supportive model, we’ve attracted interest and attention across the country as well as internationally…. Despite this, Jews in Vancouver remain largely unaware of the essential service the Vancouver Yaffa Housing Society provides our community. Despite the more recent public awareness, mental health has historically taken a backseat relative to other more mainstream community health concerns. The sad reality is that unless mental illness has somehow touched you personally, it’s simply not on people’s radar. This speaks to why, after so many years, Yaffa House remains virtually the only option for Jewish families struggling with this issue.”