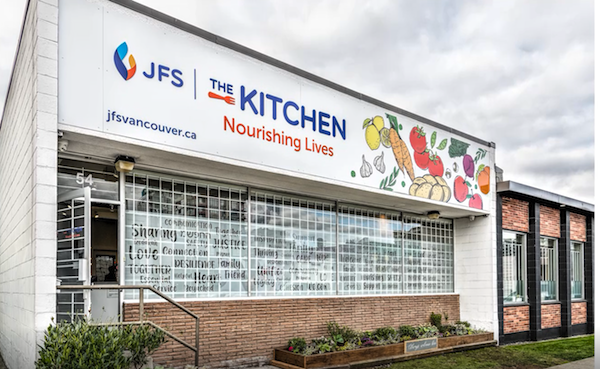 The Jewish Food Bank operates out of Jewish Family Services’ the Kitchen, on East 3rd Avenue. (photo from JFS)

Like so many other individuals and organizations since Joseph Segal’s death on May 31, Jewish Family Services Vancouver has been reflecting on the impact he has had.

“Joseph Segal was a very generous supporter of the program,” said Carol Hopkins, coordinator of the Jewish Food Bank, which was one of the two organizations people were asked, at Segal’s funeral, to donate to in his memory; the other being Yaffa House.

“He touched the lives of many people through our Seniors Home Support program and annual Passover holiday campaign. However, food security and food access was his passion and a clear priority,” said JFS in a statement. “His dedication to help underwrite our food voucher program was notable. This was a special program for many, especially in the early days, before we had satellite food hubs across the Lower Mainland.”

Those vouchers allowed people to purchase groceries near where they lived. Further, the program presented recipients the opportunity to maintain anonymity and a sense of dignity – by not having to line up at a local food bank or use discount coupons at a till. Segal placed great value on a dignified means of accessing support.

More recently, JFS has directed its efforts towards mitigating food insecurity in the community to the food bank, of which Segal was an ardent and magnanimous backer. Currently, the food bank, which operates from JFS’s the Kitchen, at 54 East 3rd Ave., serves more than 800 clients regularly and delivers more than 10,000 kilograms of healthy food every month.

On its website, JFS notes, “While not a kosher food bank, the Jewish Food Bank does not offer any meats, poultry or shellfish. In addition, for those clients who do keep kosher, it ensures that kosher items are available to them.”

Since its inception, the food bank has been operated in partnership with Jewish Women International-BC. It started with a few volunteers and has operated from various locations since the mid-2000s. It first served clients from the Jewish Community Centre of Greater Vancouver. Later, it switched to the Peretz Centre for Secular Jewish Culture, where it was based until COVID-19 hit.

At the beginning, the food bank was mostly a walk-in model. Clients would come in and people would select the items they needed. This changed to an all-delivery model during the pandemic: bags were packed and then dropped off to clients who needed support.

The number of clients has grown since March 2020, with deliveries going across the region, including the North Shore, Surrey, Coquitlam and Burnaby. In April 2021, the food bank made its move to the Kitchen, where it maintains a warehouse facility with refrigerators and freezers, allowing JFS to keep perishable donations until they are ready to be used.

In addition to providing people the chance to pick up food at the Kitchen, JFS can distribute directly to clients and to its hubs across the Lower Mainland. Food is brought into the Kitchen on Mondays and sent out to different locations from Tuesday to Thursday. In an average week, more than 40 volunteers help the program.

“We are seeing more and more the challenge of food prices going up in conjunction with expensive housing, not to mention seniors on a fixed income,” said Hopkins. “People are having trouble supplying food. Our grocery service allows people to get support and the nutritious food that they need. We really pride ourselves on that.

“JFS is fortunate,” she said. “Distributors supply us with the best pricing that they can. This allows JFS to stretch the financial contributions it receives and buy in bulk.”

JFS depends largely on donations, both monetary – to buy supplies – and of items such as food, soap, shampoo, toilet paper and diapers.

JFS estimates there will be 150 new families accessing the food bank in the coming year, given economic trends; costs are increasing and needs are growing. Rising food prices are changing the perception and the reality of who needs the help of the food bank.