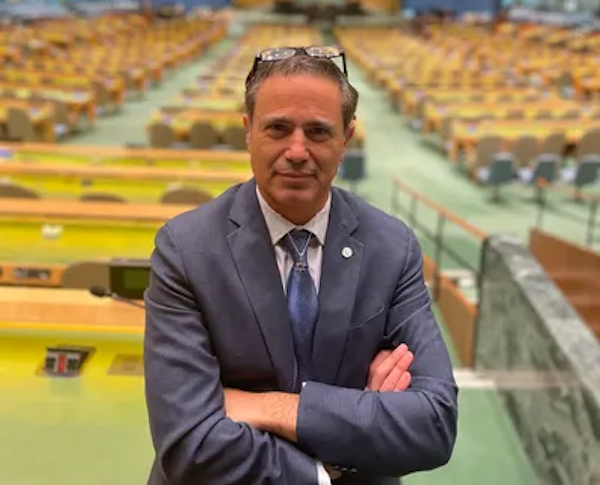 Avi Benlolo will screen a film at Beth Israel on Feb. 13. (PR photo)

There is a fundamental disconnect between what is happening in the Middle East and what observers in Europe and North America perceive, according to Avi Benlolo, founder and chairman of the Abraham Global Peace Initiative. He aims to close that gap, and will be in Vancouver next month to bring his message – and a new documentary film – to West Coast audiences.

“Peace is unfolding in the Middle East,” Benlolo told the Independent. “The Abraham Accords have completely revolutionized Israel’s relationship with some of the neighbouring countries like the [United Arab Emirates], Bahrain, Morocco and so on. This new development hasn’t yet registered here in the West.”

On university campuses and in the social movements of Europe and North America, he said, the narrative remains mired in the decades-old conflict and tired rhetoric of “apartheid,” “colonization” and BDS, the movement to boycott, divest from and sanction the state of Israel.

“The truth of the matter is that that rhetoric isn’t rhetoric in the Middle East,” Benlolo said. “In the Middle East, BDS is nonexistent. You now have trade in the billions of dollars between Israel and its Arab neighbours, so clearly BDS has lost.”

The film that Benlolo produced and directed, The Future of Israel and its Defenders, approaches the issues through the lenses of experts, military strategists, entrepreneurial leaders, journalists and current and former political leaders.

“The message I’m trying to transmit,” he said, “is one really of hope for change.… If we are reinforcing that message that this is happening, that will help build on the peace process.”

The film will be screened, and Benlolo will participate in a question-and-answer session, at Congregation Beth Israel Feb. 13, 7 p.m., in a celebration of Israel’s 75th birthday.

Benlolo founded the Abraham Global Peace Initiative after many years of working in the Jewish communal sector, including as chief executive officer of Friends of Simon Wiesenthal Centre for Holocaust Studies. AGPI became a registered charity in late 2021.

While there are many Jewish and Zionist organizations in Canada, Benlolo said his is unique.

“There is no voice for Canadian Jews internationally,” he said. “We are taking the Canadian voice global and working with the United Nations, working with the [European Union], working with multiple leaders around the world. Antisemitism and defamation of Israel is a transnational phenomenon. The swastika that you see painted on a school wall is not just localized, it’s being motivated globally.

“We are also saying, we as Canadians can stand up for ourselves,” Benlolo continued. “Canada itself is an incredible brand globally…. What AGPI is doing is optimizing the Canadian brand and we’re doing it very successfully. Every two minutes – I’m not exaggerating – there is a subscriber onto our website from somewhere on the planet, Italy, Brazil. Every two minutes. That’s because people love the Canadian brand, they love everything that we are saying, so we can be, as Canadians, an international voice with quite tremendous strength.”

While Benlolo is hoping that the Abraham Accords mute some of the condemnation Israel experiences on the world stage, defending Israel’s rights internationally may be entering a new phase, he said. The old tropes are being replaced with the phrase “Israel’s most right-wing government ever,” including in mainstream media sources.

“It’s a challenge, I’m not going to kid you,” said Benlolo. “The thing is, the media is never a fan of Israel, particularly here in Canada, outside of the National Post and maybe the Jewish [community] media. They are using any opportunity to grab hold and to make Israel look bad. They love it.”

The characterization of Israel’s new government clouds the reality, he argued. Israelis who voted for right-wing parties did so mainly on security grounds, he said, because they are deeply concerned about terrorism.

“That has driven them to move to the right,” he said, adding that Israeli society in general “is fairly secular, is not right-wing and is very pro-human rights.” He noted that the new Knesset features the country’s first openly gay speaker.

“Just because you’ve got this government right now that’s made up of a coalition doesn’t mean that it represents Israeli society and it doesn’t mean that it’s everybody in Israel that believes in this. That needs to be articulated as well,” said Benlolo. “Finally, we’re going to put pressure to bear as a Jewish community and friends of Israel, we’re going to continue to pressure Israel to make sure that it stays the course and stays true to tikkun olam.”

More details, and tickets for the event, which is presented by Beth Israel and the Jewish Federation of Greater Vancouver, are available at bethisrael.ca.

Canadian participants in a meeting earlier this month with French President François Hollande came away impressed with the French leader’s sincerity and determination to address the terrorism and antisemitism that has France’s Jews on edge.

Avi Benlolo, president and chief executive officer of the Friends of the Simon Wiesenthal Centre, and Member of Parliament and former justice minister Irwin Cotler said Hollande was empathetic to the concerns of the country’s Jews and was forthright in discussing the threat posed by French-born jihadists returning from Syria.

“Hollande spoke about the barbaric attack on the Jewish museum in Belgium” and about the protection of Jewish schools, synagogues and other community buildings, Cotler said in a telephone interview from Jerusalem.

Simon Wiesenthal Centre, which met with Hollande prior to officially inaugurating an historic exhibition at UNESCO’s Paris offices. The exhibit, mounted by historian Robert Wistrich, is titled, People, Book, Land: The 3,500-Year Relationship of the Jewish People to the Holy Land.

The exhibit was sponsored by the Simon Wiesenthal Centre along with the governments of Canada, Israel, the United States and Montenegro, and it launched this month after pressure from Arab countries forced its cancellation in January.

Benlolo said the reception by French officials and Hollande at the Élysée Palace was warm and welcoming. The delegates were anxious to express their concerns about the attack on the Jewish Museum in Brussels by a French gunman, who killed four people.

“Hollande believes there are more than 1,000 French nationals who went to fight in Syria and joined radical groups,” Benlolo said. Three hundred remain. Many came back and he’s concerned about their radicalization and if they will take action against the Jewish community.

Mehdi Nemmouche, the man accused in the Brussels attack, is believed to have spent 2013 fighting with Islamic radicals in Syria.

Hollande assured the delegates that he is working closely with intelligence and security services to track returning jihadists and to ensure the safety of the country’s Jews.

“I believe Hollande was very sincere,” Benlolo said. “The Jewish community received substantial grants to secure their schools and synagogues,” he added.

Cotler, who has visited France three times in the last six months, said, “People spoke well of Hollande and his genuineness, his commitment to combat antisemitism, to bring perpetrators of antisemitism to justice and his appreciation of jihadist acts as threatening to French Jews and France alike. He took the position that it’s a joint struggle, a part of the protection of French democracy and all of France.”

During the meeting, Rabbi Marvin Hier, dean and founder of the Wiesenthal Centre, told the president, “We meet at a pivotal time in history, when the Jewish community and France’s democratic values are under unprecedented attack by the forces of extremism both from the far right and from extreme Islamist purveyors of religious intolerance and murder.”

He applauded Hollande and his predecessor, president Nicolas Sarkozy, for denouncing an earlier terrorist attack in Toulouse that claimed the life of a rabbi and four children, but he lamented the failure of Muslim religious leaders to condemn the attacks.

Meanwhile, Cotler was effusive in his description of the Wistrich exhibit, which he called “historic.”

“It is a remarkable dramatization of history and heritage, of people, book, land, memory and state,” said Cotler.

In 24 panels, the exhibit traces Jewish history back to the patriarch Abraham, through Moses, King David and all the way through to the struggle for Soviet Jewry, the birth of Zionism and the reconstitution of the state of Israel.

The nine-day exhibit had been scheduled to open last January. Pressure from 22 Arab countries, who argued it would prejudice the peace process, prompted UNESCO to cancel it.

Responding to that decision, Hier stated, “It is ironic that, while the Arab League was trying to kill this exhibition and all the attention was focused on Paris, the UN headquarters in New York [was] hosting an exhibit entitled, Palestine, based entirely on the Arab narrative, which was not criticized as an interference with Secretary [John] Kerry’s mission.”

Following public criticism from Canadian Foreign Minister John Baird and U.S. envoy Samantha Power, the exhibit was rescheduled to open early this month, but with the name Israel removed from the title and replaced with “Holy Land.” UNESCO also required the removal of an image of the Dead Sea Scrolls, which had been part of the initial exhibit prepared by Wistrich, a professor of European and Jewish history at the Hebrew University in Jerusalem.