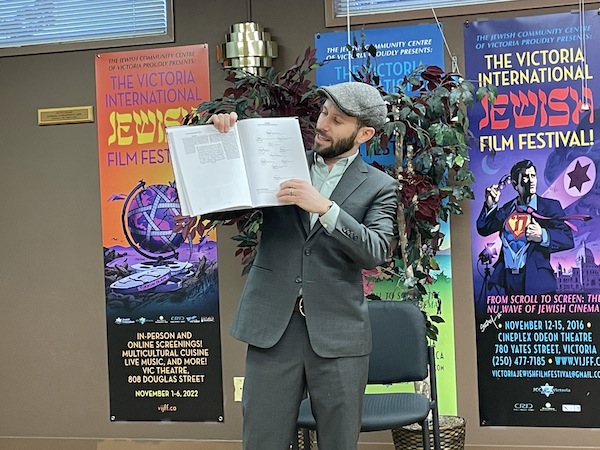 Rabbi Matthew Ponak introduced his new book, Embodied Kabbalah: Jewish Mysticism for All People, this month both in a Zoom event and in-person at the Victoria Jewish Community Centre.

According to the book’s description, the objective of Jewish mysticism is to “touch infinity with your feet planted in everyday, ordinary reality.” The book contains universal teachings that Ponak believes are necessary to the world at this time.

Delving into a millennium of Jewish writings, Ponak hopes his approach will serve as a counterweight to the focus in modern spirituality on bliss and transcendence. Throughout the centuries, Ponak argues, Judaism – including Jewish mysticism – has held “being a good person” as the ideal. 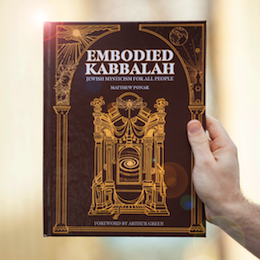 Embodied Kabbalah, written in the talmudic style, in which commentary surrounds the original texts, looks to the mystic teachings for finding a healthy balance between one’s spiritual life and external commitments to family, work and community. Many of the book’s sources have been translated into English for the first time.

During the launch at the Victoria JCC, Ponak spoke of the personal journey that led to the creation of the book. In his initial studies, he observed two different paths. “One was a path of transcendence,” he said, “a path of bliss, that all is well in the world and we should be celebrating all day. On one level that appealed to me, but I felt there was something missing in it.”

The other path, he said, is one of transformation. “This is one of deep self-knowledge: that I could get to know who I was inside, and new parts of me would start to come forward. There is a deep, radical honesty that can liberate parts of who we are. Those parts can enter into our outer lives as we become more whole.”

Upon further exploration, he discovered there was a way to incorporate both paths into one’s life.

“I found a particular teaching that says there is a time to transform – the work week – and a time to rejoice – Shabbat. One day a week, it is time to celebrate all that we have and focus on the positive, to not get weighed down by the negativity,” Ponak said. “There is a time for the deep personal transformation of working on ourselves, the spiritual work week. On Shabbat, however, everything is whole and we are, too. We feed ourselves delicious food and take an extra nap to help our bodies know the world is complete.”

Ponak emphasized that it is not necessary to choose between the paths of rejoicing and of transformation. There is a time for working and a time for celebrating. If all one has is work, then there is the risk of missing out on the beauty of life, he said. Alternatively, if one is in a prolonged state of transcendent joy, then a spiritual leader, for example, might become unable to help others grow because they have “left the world, so to speak, unable to relate to people.”

He said, “It is good to come off the mountain. It took me a long time to understand the value of that. If I had a trauma or a difficulty in my earlier years as a seeker, it was with the bliss. The transformation stuff was hard, but I was able to get it once it was taught to me in an accessible way.”

Ponak retraced various aspects of his spiritual journey. He studied transpersonal psychology (or spiritual psychology) and other religions. Through this, he found he could be both a spiritual person and grounded.  “But there was a deeper part of me that knew there was something else,” he said. “There must be something in Judaism.”

After several years of study at the Rabbinical School of Hebrew College, he was able to decode the texts on his own. He discovered the hidden treasure of grounded Jewish spirituality that had been there all along in lesser-known mystical writings.

“If I had access to Embodied Kabbalah as a teenager, it could have saved me a lot of headaches and heartaches, to say nothing of my family’s stress,” he said. “This is why this book is so close to my heart.”

Among those who would benefit from the book, Ponak pointed to those interested in Jewish mysticism, those who have Jewish ancestry but feel alienated from Judaism, and those who want to learn about universal Jewish teachings as part of the global spiritual landscape.

Yet, for him, “the call to action that feels most urgent is to help people who are ‘ungrounded,’ who are finding mystical writings or going to spiritual retreats but are not connected to the earth: to the body or to their emotions. It’s time to open up the gates of Jewish wisdom to all who can benefit from it,” he said. “I hope this effort will help spiritual seekers to be responsible, relatable, whole and healthy – along with spiritually connected – so that we can be of our greatest service to humanity.”

For more information or to order the book, visit matthewponak.com.