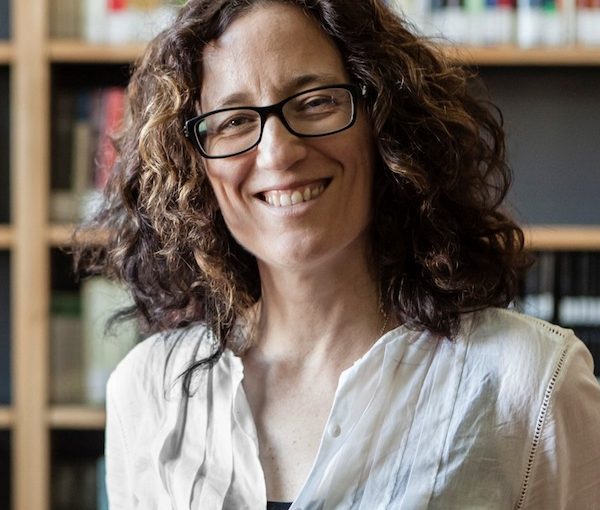 During a Dec. 4 Zoom lecture organized by Kolot Mayim Reform Temple in Victoria, historian Elissa Bemporad offered a nuanced look at the Jewish experience in Ukraine, as well as perspective on the Russian invasion of Ukraine

“It was a history marked significantly more by coexistence between Jews and non-Jews than it was by violence,” said Bemporad, a professor at Queens College and CUNY Graduate Centre in New York City. “I am saying this not only in response to the genocidal war that Russia has launched in Ukraine, justifying it by manipulating the past and demonizing Ukrainians as quintessentially violent. We should resist the view of the Jewish experience in the region, as tragic as it might have been, as if it was doomed from the very beginning and enveloped in perpetual violence.”

The current war, she underscored, has brought about the worst refugee crisis in Europe since the Second World War, with cities destroyed and civilian populations terrorized. “The aim of this war seems to be putting an end to Ukrainian sovereignty and identity,” she said. “As a historian, one of the most painful moments was reading about how the Russian occupiers were seizing and destroying books. As Jewish historians, we know all too well what happens when a society destroys books.”

Showing images of the destruction of Jewish buildings in Ukraine, such as a synagogue in Mariupol and the Hillel building in Kharkhiv, Bemporad spoke to the irony of one of Russia’s stated goals of the conflict: to rid the country of Nazis. Most of the Jews in these bombed-out cities have left, she said, and there is uncertainty as to whether they will return; many have either fled to Israel or settled in the West.

Bemporad discussed the pre-Second World War period, when 1.5 million Jews lived in what is today Ukraine, the largest community being in Kyiv, where 226,000 Jews resided, or one-third of the city’s population. Addressing the anti-Jewish violence in the region, she spoke about – among other uprisings, dating back to the 17th century – the Russian Civil War (1918-21) and the resulting atrocities committed against the Jewish population by both military units and the civilian population. Many of the pogroms took place in Ukraine and tens of thousands of Jews were killed.

“Jews were thought of as interlopers in the national body and imagined as forces connected to Bolshevism that would tear apart the nation’s fabric,” Bemporad said. “The fact that Trotsky was the leader of the Red Army did not play in favour of the Jews.”

But Bemporad highlighted a history of coexistence as well, stories in which some Ukrainians heroically stepped in to save the life of Jews, notably the writer Rakhel Feygenberg, who, along with her infant son, was hidden by non-Jews during a 1919 pogrom.

About the post-First World War era, she noted the ambivalent attitude the Soviet state had toward antisemitism. “While the state condemned antisemitism on paper, it was often eager to ignore antisemitism or to weaponize it in its best interest,” she said. “With regard to the pogroms, the Soviets shifted between acknowledging and downplaying the anti-Jewish violence. They were ambiguous in their treatment of the Jews, and they were the ambiguous in their treatment of the perpetrators, creating a state-controlled memory. However, when the discussion of the pogroms was perceived as at odds with the regime’s interests and priorities of building socialism based on the brotherhood of peoples, then the memory of anti-Jewish violence was silenced and the Soviets preferred not to investigate and punish the perpetrators.”

In other examples, she said the Soviets would use antisemitism among Ukrainians as a means to demonstrate they were prone to nationalism. And both Ukraine and Russia have provided recent examples of reviving the memories of and glorifying national heroes who were responsible for carrying out pogroms.

In a final slide, Bemporad displayed the results of a Pew Research Centre survey on antisemitism in Europe. Despite Russia’s attempts to portray Ukraine as a hotbed of antisemitism, more Russians had an unfavourable opinion of Jews than Ukrainians. And, in Bemporad’s view, Ukraine, despite its corruption, has become the most democratic of the post-Soviet states, excluding the Baltic countries. Further, as has often been mentioned in referring to the present situation of Jews in Ukraine, the country elected a Jewish president, Volodymyr Zelensky, with more than 73% of the vote.

“Siding with Ukraine today does not entail dismissing or forgetting the dark pages of anti-Jewish violence in the region,” Bemporad said. “It is rather a reminder that we can start turning those pages and writing new ones in the book of the Jews of Ukraine.”

Bemporad, a two-time winner of the National Jewish Book Award, is the author of Becoming Soviet Jews: The Bolshevik Experiment in Minsk and Legacy of Blood: Jews, Pogroms and Ritual Murder in the Lands of the Soviets. She is the co-editor of two volumes: Women and Genocide: Survivors, Victims, Perpetrators and Pogroms: A Documentary History.

The next speaker in Kolot Mayim’s Building Bridges series will be Sari Shernofsky, a retired community chaplain from the Calgary Jewish community, on Stories from the Narrow Bridge: Meeting People in Their Time of Need. She will speak on Jan. 8, 11 a.m. Visit kolotmayimreformtemple.com.