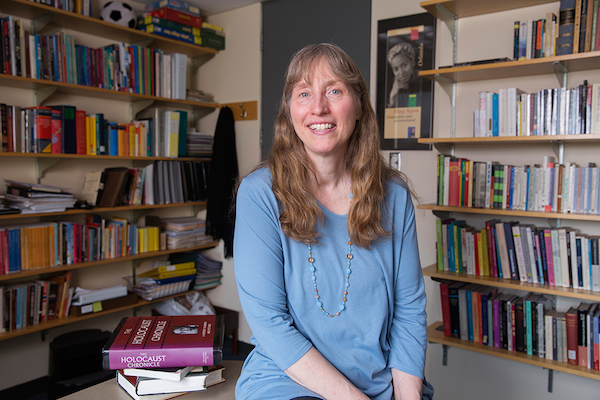 Dr. Helga Thorson of the University of Victoria. (photo from uvic.ca)

The University of Victoria unveiled its Stories of the Holocaust: Local Memory and Transmission exhibit – a project that was part of a combined undergraduate and graduate seminar on Holocaust and memory studies – during an online launch on April 15.

The exhibit is the result of a collaborative effort. Ten community members, comprising Holocaust survivors and descendants of survivors, from Vancouver, Victoria and Salt Spring Island, were paired with 10 UVic students to present wide-ranging and diverse stories from the Shoah in a context both personal and relevant to future Holocaust education.

“Students worked one-on-one with a community partner to figure out the best way to tell each story. This, as they discovered, was no easy task,” said UVic professor Dr. Helga Thorson, the course’s instructor. The students had to learn new technological skills, go over an extensive reading list and develop interpersonal skills, which included “relationship-building and the ethical dilemmas that come into play when telling somebody’s story that is not your own.”

“The engagement and involvement of the 10 students, who took the class assignment seriously, will go a long way in helping us remember the Shoah and the story passed on by their community partner,” said Thorson. “Remembering the past also helps us reflect on the present and what this means for us in today’s world as we continue to grapple with antisemitism, racism and other forms of violence, hatred and injustice.”

Ireland Good, one of the students involved in the project, thanked the Jewish community members for “their courage and their trust in us to tell their stories and to create this exhibit. I have thoroughly enjoyed this experience,” said Good, “even with its low moments, as I am sure it is with all the other students.”

Maslovat was the youngest prisoner ever at Buchenwald, and he is the subject of a recent film, Why Am I Here?: A Child’s Journey Through the Holocaust. The day of the launch, April 15, had a special significance for Maslovat, as it marked the 76th anniversary of his liberation from Bergen-Belsen. He was just under 3 years old at the time.

“My story did not come to me in a neat package. There were people who knew parts of it and contributed. Other parts I had to dig out of archives in Israel, Germany, Sweden, Britain, Poland, U.S. and Finland. I have tried to tell my story by putting together the pieces like a jigsaw puzzle. This time, I have included material I have not spoken about before,” said Maslovat, explaining his contribution to the archive.

“Despite what people may think about Holocaust survivors writing their memoir or speaking about their experience, we are not navel-gazing,” said writer Boraks-Nemetz, who escaped from the Warsaw Ghetto and lived in hiding. “We who have stared into the abyss of the atrocity that was the Shoah can never erase it from our memories. When I speak about my experience, I always think of the survivors and the victims, of the injustice wrought by a madman who destroyed lives – lives of children, of my little 5-year-old sister, who was brutally murdered for being a Jewish child … of the 1.5 million children who needlessly died.”

Boraks-Nemetz continues to explore the personal and broader impacts of the Holocaust through recent works, the novel Mouth of Truth and a collection of poetry, Out of the Dark.

Dr. Richard Kool is the son of Waas, who hid in the Netherlands during the war. He spoke of the importance of conveying the story to future generations. “I’ve really understood that, as Hester’s child and the oldest of my siblings, I have a responsibility as a carrier of a message that helps me keep looking forward towards recipients, towards recipients who have more life in front of them than behind, recipients who may not even be alive yet,” he said.

“We, the survivors and their children, must look forward and consider the powerful message for future individuals and generations,” he added. “Messages that say, ‘Don’t wallow in despair, worry and victimhood, but act, now, to do what you can with the tools at your disposal and the people around you to help co-create a fairer, healthier, more just, more peaceful community and society.’”

To view the exhibit, go to omekas.library.uvic.ca.