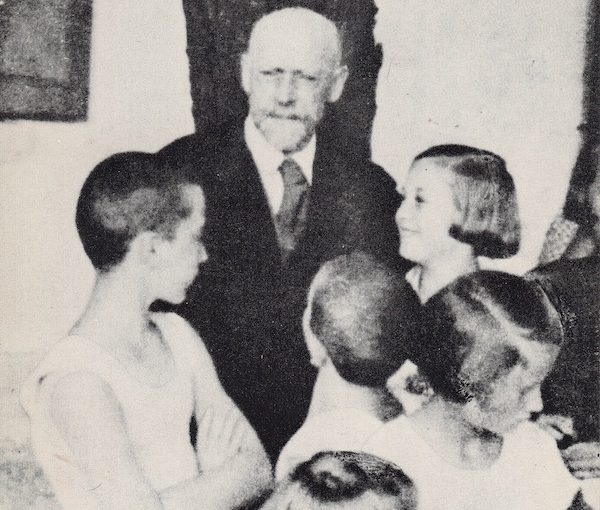 A postcard showing Janusz Korczak in the courtyard of the orphanage on Krochmalna Street in Warsaw, Poland, in the early 1930s.

An unprecedented interdisciplinary event will take place this summer at the University of British Columbia, focusing on the legacy of Janusz Korczak, a pioneer in the area of children’s rights and welfare.

Korczak is perhaps remembered most for his final act of heroism: his refusal to accept an offer of a reprieve, choosing instead to walk with the 200 or so orphaned children of his school as they were sent to their deaths at Treblinka. But it is his legacy as an educator, physician and writer that will be the focus of the 2019 Korczak Summer Institute. The two-week intensive program, called Advocacy in Action: The Legacy of Janusz Korczak, is open to graduate and undergraduate students across disciplines. It takes place July 2-11.

“To the best of my knowledge, there’s never been a university-based course on the work of Janucz Korczak, not in his native Poland, not in Israel, certainly not in North America,” said Rabbi Dr. Hillel Goelman, professor emeritus in UBC’s department of educational and counseling psychology, and special education. The program was developed across disciplines, reflecting Korczak’s range of academic and philosophical work.

“He was a pediatrician by training, so we reached out to the department of pediatrics to get their help and a number of faculty members are going to do Korczak-related activities,” said Goelman. “He was an educator, so the faculty of education were happy to co-sponsor the course with the Januscz Korczak Association [of Canada]. But it would also be open to people studying social work or any sort of child-focused activity. A lot of people at UBC support the whole cause of child activism and child welfare from an interdisciplinary perspective.”

Korczak’s philosophy inspired and informed the United Nations Charter on the Rights of Children. Importantly, his work was not limited to academics or writing, but was devoted to applying his values of child empowerment directly to the real world.

“Children are not the people of tomorrow but people today,” Korczak wrote. “They are entitled to be taken seriously. They have a right to be treated by adults with tenderness and respect, as equals.”

“In the orphanage that he ran in Warsaw, they had a children’s parliament, where children elected their leaders to make the rules and enforce the rules,” said Goelman. “There was a children’s court, where children could complain about their treatment either by the staff or by other students. There was a children’s newspaper that they published. He very much empowered children and he thought it was important to draw on this and give them opportunities to develop their own leadership. I think those are all very important contemporary messages for educators, social workers, pediatricians … and it’s kind of timeless. It’s really relevant to where we are today in terms of child activism, child welfare and child advocacy.”

The institute is designed to help participants transform their working environment to model democratic principles pioneered by Korczak in his writings, pedagogy and governance of the orphanages under his care. It will also encourage participants to adopt strategies to translate the respect for children’s rights into professional practices, including communication with parents and the larger community, and to learn how to help children in developing and sustaining their cultural identity, particularly among those who may struggle with multiple identities.

The course will be taught by Prof. Tatyana Tsyrlina-Spady, an internationally recognized expert on the life and legacy of Korczak and adjunct professor at Seattle Pacific University. She will be joined by a team of international and national invited speakers: teacher trainer and UNICEF consultant Jonathan Levy (Paris, France); founders and leaders in the field of social pediatrics Dr. Gilles Julien and Hélène Trudel (Montreal); researcher and practitioner of Korczak’s legacy Wojtek Lasota (Warsaw, Poland); several UBC professors of nursing and psychology; U.S.-Canadian writer Tilar Mazzeo (Victoria); and a Holocaust survivor and poet, Vancouverite Lillian Boraks-Nemetz.

Promoting Korczak’s pedagogical ideas, as well as their effect on children’s education, is part of the mandate of the Janucz Korczak Association of Canada, which was founded in 2002. The president, Jerry Nussbaum, lives in Vancouver, as do fellow board members Goelman and Boraks-Nemetz.

“His work is very much alive,” said Goelman of Korczak.

The deadline to register for the UBC course is May 28: pdce.educ.ubc.ca/child-advocacy.