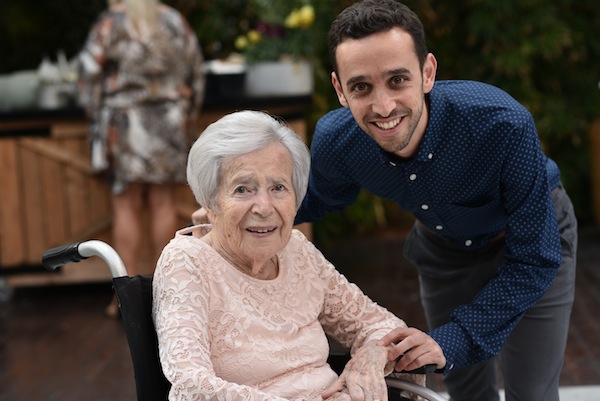 Elad Pelleg and his grandmother, Dvora. Pelleg shared his family’s story during the community’s Yom Hazikaron ceremony May 7. (photo from Elad Pelleg)

The sacrifices Israeli families have made for 71 years were marked in Vancouver last week during Yom Hazikaron ceremonies. The tragic losses of life in wars, intifadas and terror attacks were memorialized by hundreds of attendees at the Jewish Community Centre of Greater Vancouver May 7.

The annual ceremony, led by Geoffrey Druker, specifically acknowledges family members and friends of local community members who have died defending Israel. The impacts of the losses were individualized through the stories of particular families, including numerous who lost more than one member, often across generations and in different wars.

Dvora was born in Hungary, in 1921, the second daughter in an Orthodox family of seven children.

“As a teenager, she joined a Zionist youth movement, where she discovered a new world, and a new yearning was born: to live in the land of Israel,” her grandson told the audience in the Wosk Auditorium.

He recounted the story as his grandmother had told it to him: “One day, we were invited to see a movie about the chalutzim (pioneers) … I asked my mother to join me, to see for herself what Zionism was all about, and understand my dream of moving there. She came from a very Orthodox family. This was not an easy request for her to fulfil. She deliberated and, in order not to disappoint me, decided to come. She did not want to be recognized, so she disguised herself and joined me for the movie. At a time when antisemitism was rampant, seeing a movie that showed the freedom and spirit of living in the land of Israel brought her to tears.”

Dvora went on to become a Zionist youth leader and received additional training, hachshara, in preparation for aliyah to the land of Israel.

“In the hachshara, she met my grandfather, Yosef,” Pelleg said. “In 1939, the war broke out and their lives changed completely. My grandparents, Dvora and Yosef, decided to move to the capital, Budapest, in an attempt to migrate to Israel illegally. They failed to make this journey, stayed in Budapest and got married in 1942. On the 22nd of August, 1943, their son Michael was born.”

When the Nazis invaded Hungary, Yosef was sent to a labour camp, while Dvora fought to survive with baby Michael.

“She had to keep moving between cellars and attics; she suffered from hunger, and ended up surviving only due to her tremendous effort,” said Pelleg. “My grandfather survived a number of labour camps and a death march. After the war, he returned to Budapest to reunite with my grandmother and Michael.”

Dvora lost her parents, Hanna and Yitzchak, as well as three siblings, all murdered in Auschwitz.

“The only thing left from her mother is a single photo she carried on her throughout the war,” Pelleg said. “Being refugees in their own country, they sought a way to Eretz Israel. In 1947, they boarded an unauthorized ship, Geula, with many other Holocaust survivors. The British, who at that time governed the land of Israel, stopped the ship and sent them to an internment camp in Cyprus, where they were held for almost a year.

“It was there, behind barbed wire, that they heard [about] the establishment of the state of Israel, on May 15, 1948,” Pelleg said. “Later that year, they finally made it to Israel, where two sons were born: Shimon and my father, Eli.” The couple Hebraized their named to Pelleg from Pollock when they began working for the Israeli government.

Michael grew up in Israel, graduated high school with honours and served in the army as a combat medic. Following his army service, he enrolled in university and studied accounting. In 1966, he married the love of his life, Ester.

“In 1967, the Six Day War broke out,” Pelleg recounted. “Michael did not receive an army call-up, but his heart commanded him to pack a bag and join his unit. Before leaving the house for the last time in his life, he said to his mother, ‘I can’t stay in the classroom while the army is fighting to defend our country.’

“When he reached his unit, he found that they already had a medic in place, yet he insisted on joining them anyway. On the first day of the war, June 5, 1967, in a fierce battle on the outskirts of Rafiah, his armoured vehicle was hit. Michael Pollock, the uncle I never met, was killed.

“My grandmother had to bear the heavy burden on her shoulders and in her soul, of not only being a Holocaust survivor, but also a bereaved mother. Her family was murdered on European soil and her son died in battle in Israel and, this time, she could not save him.

“When I was born, my parents gave me the middle name Michael, in his memory,” said Pelleg. “Being my grandmother’s first grandson, we have a very special connection and she is a very significant figure in my life. As a child, visiting her in her house, I would ask her many questions: about her family, about the events of the Holocaust, about Michael and why he died in the war. Slowly and with great difficulty, she opened up and shared with me her story, the story of our family.”

When Pelleg was 13, the year of his bar mitzvah, he started participating in Yom Hazikaron memorial ceremonies with his family, and described a typical commemoration.

“We start in the evening with a ceremony at Beit Yad L’Banim, the memorial home for fallen soldiers, in the city of Ramat Gan,” he said. “In the ceremony, they read the names of all the fallen soldiers of the city, sing a few songs and read passages about mourning, bereavement and love that will never be fulfilled. When Michael’s name is called, we light a candle in his memory and listen quietly to Savta crying softly at the end of the row.

“On Yom Hazikaron, the following morning, we meet at the military cemetery at Kiriyat shul. There are thousands of graves there and, around each one of them, a family like mine gathers. We all stand together and listen to the chazzan recite El Maleh Rachamim.”

Despite all this, Pelleg said his grandmother’s story is not only a story of mourning and bereavement but also of strength and resilience.

“In memory of their son, my grandparents decided to dedicate the rest of their lives in service of the state of Israel,” he said. “My grandfather worked first as a civilian in the army, and then in the Ministry of Defence. My grandmother worked in the Mossad, the national intelligence agency, until she retired. After my grandfather passed away, she chose to volunteer at a nonprofit called Yad Sarah, which provides medical equipment for those in need.”

Now 98 years old, Dvora is no longer able to attend the memorial ceremonies. On her 90th birthday, Pelleg told her: “Your life shapes my identity, my choices in life, and is expressed through my middle name, Michael, which I carry proudly.”

The JCC Choir, led by Noa Cohen, as well as Ellen Silverman on piano and Kinneret Sieradzky on violin, provided musical tributes. Rabbi Shlomo Gabay chanted El Maleh Rachamim. Rabbi Philip Gibbs said Kaddish. If’at Eilon-Heiber lit a yahrzeit candle for her friend Yaacov Koma and Samuel Heller lit a candle for his friend Adero Ahonim. Yoni Rechter, who was the featured performer at the next night’s celebration of Israel’s independence day, sang his hit song “Tears of Angels.” The event was co-sponsored by the Jewish Community Centre of Greater Vancouver and the Jewish Federation of Greater Vancouver.

Druker marked the end of Yom Hazikaron at the Chan Centre just prior to the beginning of the community’s Yom Ha’atzmaut celebration. The festivities opened with the singing of O Canada and Hatikvah by the King David High School Choir, directed by Johnny Seguin, and included remarks by Karen James, Candace Kwinter and this year’s shinshinim (volunteer emissaries) from Israel, Or Aharoni and Ofir Gady, as well as a video of greetings from previous shinshinim and a call for hosts for next year’s volunteers. The JCC’s Orr Chadash and Orr Atid dancers, under the leadership of Noga Vieman, performed, as did the Juice Band, before Rechter and his fellow musicians took to the stage. The annual Yom Ha’atzmaut celebration is presented by Jewish Federation, with hotel sponsor Georgian Court, media sponsor Jewish Independent and 45 other community partners. For an interview with Rechter, see jewishindependent.ca/israeli-music-icon-sings-here.