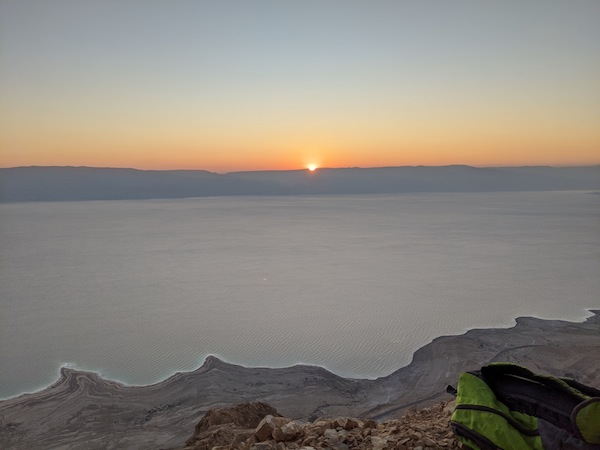 Sunrise at the Dead Sea. (photo from Kevin Keystone)

In this three-part series, the author recounts some of his experiences on Masar Ibrahim Al-Khalil, the Path of Abraham the Friend, which he visited in 2019. The articles have been adapted from a few of the letters he wrote home to family. The events and people described are real but, for reasons of privacy, the names are fictitious. To read Part 2, click here; for Part 3, click here.

I’m writing this from a rooftop deck in the small community of Arraba, about 15 kilometres from the West Bank’s northern border. We walked two days to get here along the Masar Ibrahim Al-Khalil, the Path of Abraham the Friend, a 330-kilometre trail from Rummanah in the north to Bayt Mirsim in the south. We’re here as part of a guided tour with the Siraj Centre; for 15 years, Siraj has organized walking, cycling and hiking experiences in Palestine.

Tonight, all eight of us will be staying at this villa. It’s unusual for a host to have so much room, but the Hassan family specially renovated their home to accommodate large groups. Noor, her husband and their five children have been hosting hikers on the Masar for five years. Throughout the hike, we’ll stay in homes like this, as well as hotels, guesthouses, Bedouin tents, and even a night in a cave.

Dusk has arrived; the evening view is clear and beautiful. The sun has set over the peaks and valleys of the West Bank, the lights of Palestinian villages and Israeli settlements shimmer around us. Beyond the hill ahead of me, backlit with shades of peach, rose and grey, lies Israel, Netanya and the Mediterranean Sea. A half-moon rises above.

The villages and settlements may seem quiet and peaceable, but are walled off from one another with concrete and hostility. The sea beyond means, for some, Europe, North Africa and its opportunities; for others, impassable waters. What is this place? How did we get here?

Five of us will walk all 25 days from Rummana to Bayt Mirsim: Felix and Thomas, Quebecois hiking companions in their 40s and 50s; Oliver and Eve, two 50-something activists from the United Kingdom; and myself, a 30-something freelance writer from Toronto. The remaining three will walk one to two weeks: John, a real-estate project manager who hiked Everest for his 60th birthday; and Sue and Howard, a retired teacher-principal duo from California. Neil, a young British doctoral student, hopped off yesterday and will be back for short stints in the coming weeks. Ines, an older Swede, walked with us for just the day.

After the hike, I plan to visit a friend in Beirut. In light of the protests against the government, I shared my reservations with Ines, who lived in Lebanon for two decades. “I lived in Beirut through the civil war,” she said, smiling. “You’ll be fine.”

If not all of us are quite so hardcore, we’re all mostly hikers. Sue and Howard walked 1,000 miles on the Camino de Santiago, Spain’s well-traveled Catholic pilgrimage-turned-hiking trail. I walked the Camino, but at half their age and half as far. Felix and Thomas are also Camino veterans: we all seem to have an affinity for long-distance trails in places of importance and meaning.

We are and aren’t here for the hiking. We’ve come to see Palestine for ourselves and hear directly from Palestinians. For my part, it felt like something of a responsibility. Like many Diaspora Jews, I have supported the state of Israel, either directly or indirectly, and benefited from it. I went on Birthright, the two-week, all-expenses-paid tour designed to build affinity and political support between young Jews and the state. I’m familiar with that side of the story – but after 50 years of occupation and a seemingly never-ending conflict, something didn’t quite fit for me.

Before I left for the Masar, I asked my rabbi for a blessing. In synagogue, she prayed that I would come here “with eyes wide open” and return home “with eyes opened wide.” It’s a prayer I share.

On the Camino, in Spain, locals are largely inured to tourists; here, on the Masar, tourists are rarer. Every local we pass waves hello, is happy and surprised to see us, stops us and wants to give us coffee. Yesterday, we were stopped often by olive-pickers – it’s the season for it. Enthusiastically, they beckoned us over to the stone borders of their groves, where we sat and shared thimbles of coffee spiked with cardamom. As we walked through towns and villages, small children yelled, “Hello! Hello!” and waved to us, their parents replying to our greetings of salaam aleykum (peace be upon you) with wa’ aleykum salaam (and peace upon you) and ahlan wa sahlan, you are welcome here. In these moments, of which there are many, I’m buoyed by unimpeachable hospitality.

This is, however, different from the Camino in other ways. I walked 40 days on the Camino and rarely thought about politics; here, every day is political. I never felt awkward about being Jewish on the Camino – except once, when I asked a local barkeep at a tavern called La Judería if there were any Jews left in the town. He laughed and said: “Not since the Inquisition.” Here, my being Jewish is something I keep to myself, to avoid assumptions about my politics. It’s different when you carry so little on your back and so much in your head. The walking is both easy and hard: mercifully, I have no blisters, but I’m still uncomfortable.

In the evening, after a home-cooked meal, we sipped sweet sage tea in the Hassans’ living room and listened to their story. Noor sat beside her husband Yusef, who spoke to us in Arabic while their son, Rayan, a young man with kind eyes and short hair, translated. If memory serves, Rayan was studying in the United States, which explained his excellent English.

Two years ago, Rayan’s brother, Nader, attended a rally at his university in support of Palestinian political prisoners on hunger strike. Five weeks before we arrived, Israeli soldiers entered the home where we were now staying, at 2 a.m., and arrested him. Nader was taken to prison without charge, where he’ll likely remain without trial for up to seven months. At the end of his time, he could be released; or, he could be detained again for another seven months, without explanation. According to his family, this cycle can repeat indefinitely. The practice is both common and permitted under Israeli military law, which is still in effect in the West Bank, 53 years after the Six Day War.

Noor was quiet, eyes downcast, hands folded in her lap. This was a mother who had lost her son, taken in the middle of the night, who wasn’t sure if or when she would see him again. As I understood from them, adults over 18 are restricted from visiting prisoners: they plan to send their teenage son, Malik, to visit Nader and bring offerings of the family’s love and hope.

In the short time we’ve been here, we’ve learned of the various ways in which Israel makes life nearly impossible for Palestinians: checkpoints; control over water, electricity, building and agricultural permits; the separation wall; demolition of homes and olive groves; restricted movement internally and internationally; arrest and imprisonment without trial; and, of course, the endless encroachment of settlements, which have been deemed illegal under international law by the United Nations Security Council and the International Court of Justice.

History, of course, is relevant to the present and, here, one can feel the weight of it, but it’s difficult to find a version that isn’t heavy with narrative. A briefing yesterday began with, “When Israel occupied Gaza and the West Bank in 1967….” That’s true, but Israel occupied the territories as an outcome of the Six Day War, which raises questions of how it started and who provoked it. (The answer, as with most things Israel and Palestine, is hotly debated and too extensive to rehash here.) Yesterday, we didn’t talk about the Six Day War, nor the nuances of what came before it. The conflict doesn’t justify the occupation, but to leave out relevant context, to drop the “why” behind the “what,” I’m not sure that’s helpful, either.

On Birthright, we visited an Israeli military base. One of our trip’s soldiers was a pilot in the air force; in the common room, rows of flat, black, airplane-shaped medallions were pinned to a wall. Someone asked what they were. “Those are enemy aircraft,” the pilot said. “Each one marks a plane we shot down.”

The group erupted in applause. I froze, horrified. It reminded me of the story we tell at Passover, when the Heavenly Hosts rejoiced at the drowning of the Egyptians in the Red Sea. “My creatures are perishing,” God silenced them. “And you sing praises?”

It’s dark now. Stars are appearing in the night sky. Crickets chirp and trucks rumble low in the distance, no doubt carrying goods along labyrinthine backstreets to avoid Israeli-controlled roads, or the possibility of a checkpoint rejection or closure. So much time and life wasted. Tomorrow, we walk. It’s day two, I’m not sure where this road will lead. But all I can do is keep walking.

Kevin Keystone is a Toronto-based freelance writer, editor and researcher. When not hiking long-distance trails, he can be found reading, spending time with friends and family, or with his beloved partner, Aaron. His writing has been published in the Literary Review of Canada, the Jewish Independent and Good Old Boat.