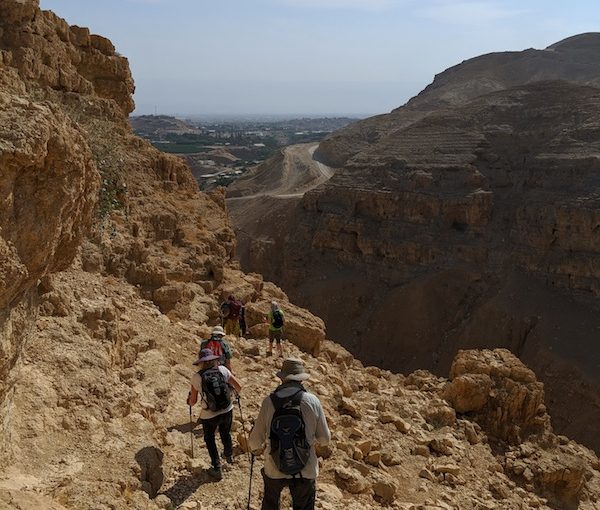 Descending into Jericho through “the Grand Canyon of the Middle East.” (photo by Kevin Keystone)

In this three-part series, the author recounts some of his experiences on Masar Ibrahim Al-Khalil, the Path of Abraham the Friend, in the West Bank, which he visited in 2019. The articles have been adapted from a few of the letters he wrote home to family. The events and people described are real but, for reasons of privacy, the names are fictitious. To read Part 1, click here; for Part 3, click here.

Tuesday was, by far, the hardest day of the trail. We climbed and descended two mountains: 1,500 feet up, 1,400 feet down; 1,000 feet up, 1,200 feet down. It’s 10 feet to a storey, so divide by 10 and think of them as flights of stairs, except that they’re rocky paths strewn with slippery rubble and spiky brambles.

Shrubs aside, Monday and Tuesday were thorny for other reasons. Our guide, Ismail, seemed very friendly. Jolly, with a wide smile and open face, he spoke English well and with a quirky British accent. He was nearly 40, married, had one young child and another on the way. He’s been a hiker and guide for a long time: trained at university, he is an expert in local fauna, flora and history. When a member of our group fell and cut his arm, Ismail was right there with bandages and fracture assessments. There was no question: he was a professional.

Ismail, though, had a satirical sense of humour, which, given the political landscape, was risky. He explained the settlers’ justification for occupying land in the West Bank. “They say that God gave it to them,” he said. The relevant verse from the Torah bubbled up in my memory. “Go forth from the land that I will show you, and I will make of you a great nation,” goes Genesis 17. I knew it because I had chanted it for my bar mitzvah.

“If God gave it to them, what did God give to us? Nothing?” Ismail said. He was smiling, but wasn’t joking. “If they get this, we’ll take Spain. We don’t need to do archeological digs – our mosques are still there to prove it.” I chuckled along with the group, appreciating the irony. But I stood back, polishing my sunglasses.

“They say they are special,” he continued, “that they are ‘the chosen ones,’ but what does that mean? That they are made of gold and jewels, while the rest of us are mud?”

“And I will take you to be my people,” God says to Abram, also Genesis 17. “And I will make my covenant with you and your descendants and through all the generations.” This idea of “chosenness” has been interpreted, reinterpreted and, at times, even rejected in our history: Reconstructionist Jews, for example, changed the relevant lines of the Aleinu prayer. Thinking of ourselves that way certainly hasn’t done us any favours. But, still, Ismail’s comments stung a little.

Writing this, I suppose his humour was a bit like my dad’s: irreverent and occasionally tasteless. I had never been offended by my dad’s jokes; his topics were largely inconsequential to me. Here, with so much at stake, it was hard to not feel Ismail’s satire more deeply. I wanted to tell him I was offended, but part of me resisted.

Sue, on the other hand, had no problem speaking up. That evening, we gathered around to discuss plans for the next day. “Tomorrow,” Ismail said, laying out a map, “will be the hardest day on the trail. There are three options: we can either hike the whole day; stop halfway and take a car; or stop near the end and take a car.” We all agreed we’d hike the whole day. Sue sat back against the bench.

“Are you sure?” he insisted. Sue was in her 70s: it seemed like he was singling her out because she was older, and possibly because she was female. “I am sorry if I scared you.”

“I’ve walked a thousand miles before,” she cut in. “I’m not scared.”

Eve laughed and said to Ismail, “Sue’s fine. It’s the two of us,” referring to her husband Oliver, herself, and their combined lack of hiking experience, “that you should be worried about.”

After the route was settled, Sue pulled Ismail aside. She pointed out to him the ageism and sexism implied in his doubting of her abilities. She was brisk; he was deeply apologetic.

“It’s fine,” she said, when he didn’t stop apologizing. “You apologized. It’s over. Howard and I fight, we apologize, it’s done.” After another round of reassurances and with parting words to the group, Ismail left for the night. I congratulated Sue on standing up for herself.

“Yeah,” I said, smiling. “Howard said you don’t take shit from anybody.” She laughed again. “But, still,” I said, “good for you for saying something.”

“Thank you, Kevin,” she said, looking at me. Even with her fortitude, I wondered if it had cost her to say something. Maybe, in some ways, it always does. “I appreciate it,” she said.

The next day, I found myself quietly pleased at Ismail’s dressing down from Sue. Somehow it felt vindicating; even if I couldn’t find the words to speak my mind, at least someone else did.

“Before we start,” he said, “I need to show you something.”

He turned his smartphone to us and pressed play. The footage was of a road tunnel with an exit at the far end and a truck askew, blocking the way. There was shouting and then a hand flicking angrily towards a young man, yelling at him to walk. He did, with his back to the camera, one hand raised in surrender, the other halfway, awkwardly carrying a backpack. He couldn’t have been older than me. He kept walking, slowly, towards the truck and the tunnel exit. Just before he reached the truck, a shot fired. He cried out and sank to the ground.

Israeli Channel 13 News leaked the video – of an Israel Border Police officer shooting a Palestinian in the back with a rubber bullet, along with text messages sent by the shooter’s fellow officer, who had bragged about the shooting to his girlfriend. “I’m a pro, don’t you think?” he wrote.

This act of violence earned the shooter a removal from the police force. She was sent back to the Israeli army to finish her compulsory service. A year after the footage was discovered, the police internal investigations unit still hadn’t pressed charges. The apparent impunity is shocking. Compared to this, my grievances seemed trivial.

“Do you ever take Israelis on this hike,” someone asked Ismail.

“No, we don’t. We can’t, it’s too risky,” he said. “If something were to happen, if one of them gets hurt, we would all be in big trouble. Their government would say it is our fault, and we would have many, many problems.

“There are Jewish that come on the Masar,” he said. I wasn’t sure if he avoided looking at me. “We know; we don’t ask. But we will not take Israeli; we can’t.”

As the day wore on, I worked up my nerve to talk to him. I rehearsed my opener and hiked up beside him.

“So, what are your plans for after the hike,” I asked.

We didn’t talk about anything important, but it felt important to talk. I had time after the hike and didn’t have plans. I asked his advice on where I should go. I also asked him what I should say at the border if stopped.

“Just talk about the Abraham Path, how we’re all children of Abraham, peace, these kinds of things,” he said. “They like that.”

“No,” he said. I tried to hide my disappointment. “You know,” he continued. “It isn’t the Jewish, it’s the Zionists. They are crazy, they think they are super-human. Every time the people are coming together, they want to separate, to make them apart. As long as this is the case,” he said, “I don’t think there will be peace.”

At lunch, I lay down to rest, settling in the shade of an olive tree. In the breeze, the leaves revealed twin shades of green, one on each side: rich, verdant forest green and pale, suede sage. There were no olives on this tree: likely, they had been recently picked. The absence they left made way for a cottony, afternoon light to filter through. As I nodded in and out of sleep, I caught glimpses of the sky. It was blue and clear.

Zionists come in many varieties, but I knew the ones Ismail was referring to. The imprecision of his language didn’t change the point. Yitzhak Rabin wasn’t assassinated by a Palestinian; he was assassinated by a Jew. A fanatical religious Zionist, a fervent supporter of the settlements and a deep-seated opponent of the peace process. Ismail didn’t have a problem with Jews, he had a problem with fanatics. That, I could get behind. I felt the same way.

Kevin Keystone is a Toronto-based freelance writer, editor and researcher. When not hiking long-distance trails, he can be found reading, spending time with friends and family, or with his beloved partner, Aaron. His writing has been published in the Literary Review of Canada, the Jewish Independent and Good Old Boat.