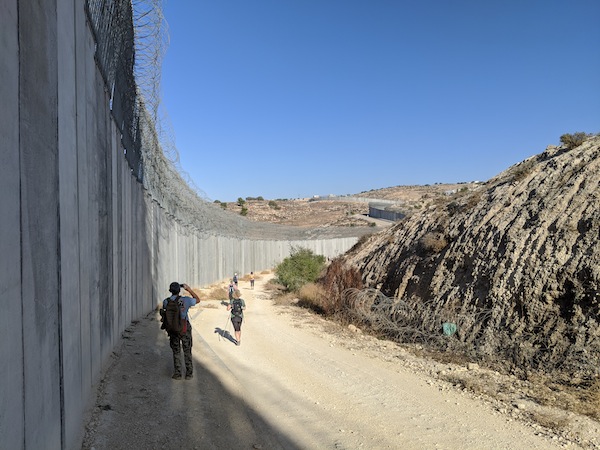 In this three-part series, the author recounts some of his experiences on Masar Ibrahim Al-Khalil, the Path of Abraham the Friend, in the West Bank, which he visited in 2019. The articles have been adapted from a few of the letters he wrote home to family. The events and people described are real but, for reasons of privacy, the names are fictitious. To read Part 1, click here; for Part 2, click here.

Today was our last day on the trail. After many late nights of parlour games, beers and anticipation, we were tired. One of our fellow hikers, Felix, had to stop periodically: the soles of his shoes had worn through, he could feel the tiny stones biting underneath. Uncharacteristically, he was in pain, but he muscled through.

We descended into a valley, dotted with pale green brush, reminiscent of our first days on the trail. The valley opened into expansive views of olive groves, steppes cut into the hills, tidy rows of trees buttressed by stone walls. It could have been Tuscany but was the Middle East, with a warm breeze and soft, popcorn-shaped clouds overhead.

Admiring the scenery, I thought of what lay ahead. I would be spending tonight in Jerusalem. It was a place I hadn’t been since my Birthright trip eight years ago. My rabbi had once invited me on a congregational tour of Israel, in recognition of my service to the synagogue, but I turned it down. A friend rightly pointed out that, as an Arab Muslim, he couldn’t visit the Holy Land as readily as I could. In solidarity, he suggested I shouldn’t go. That seemed fair, so I didn’t. But here I was, so close to Jerusalem and the Wailing Wall. How could I not go?

It was a hot day on my Birthright tour. We weaved our way through the Old City, through its various souks and alleyways, to arrive at a platform high above the Wailing Wall plaza. Our guides wanted us to see it there first for a clear, unobstructed view. It wasn’t busy, just another day in Jerusalem at the Wall and the holiest site in Judaism. The wide-open plaza was sleek and clean, the great stone wall standing pink and golden.

We descended towards it, and I could feel the heat. I was dehydrated and a bit dizzy. Our guides released us and we ambled forward, dazed, in the wall’s general direction. A man stopped me and asked if I wanted to put on a prayer shawl. I did. He asked me if I wanted to lay tefillin. I had never done it before. He helped me. “Repeat after me,” he said. “Baruch atah Adonai …” as he wrapped the leather band around my forearm.

Prepared, I approached, pulled in by the wall’s gravity. I slipped off my sandals to stand on the ground with my bare feet. I pressed my hand to the mottled stone and closed my eyes. “Baruch atah Adonai,” I began. Strangely, I felt both heavy and light, a yearning and also a surrender. I said the Avot v’Imahot, the prayer that recognizes our descent from Abraham and Sarah, tracing us back through the generations. I didn’t know, then, how important that moment and that prayer would be.

When I was finished, I slipped on my sandals and stepped away.

“This might be the most beautiful day on the trail,” said Jane, a soft-spoken homeopath, a Mancunian and longtime friend of fellow hikers Eve and Oliver. Her husband George was in business software. He regularly meditated.

She was right. I was worn out but had to agree. It was beautiful. Picturesque, even. Idyllic. We pulled over, as we had during our first week, to have coffee with olive harvesters and help them rake the trees. A young mother with her toddler, husband and parents: harvesting is so often a family affair. Hospitable as ever, much coffee and tea was poured and drank, olives collected, tobacco rolled, puffed and exchanged. We waved our goodbyes – shukran, aleykum salaam – and continued on.

A stretch of valley gave off onto a final stretch of orchards and, as I clambered over the low stones, I looked up and saw the separation wall. From a distance, the 25-foot concrete wall, scrawled with barbed wire, rose through the canopy of the trees. Hesitatingly, I walked towards it, tracing its contour in my mind. In some parts of the West Bank, the barrier is composed of giant slabs of concrete dotted with military towers; in others, it is coiling pyramids of barbed wire or electrified fence bordered by wide swaths of sand to detect trespassers. Here, it is rebar and cement, two-and-a-half storeys high, and cuts through olive groves and the hills around it. I pressed my hand to it; it was cold and abraiding. I closed my eyes and said a prayer for a future without it.

Compared to the West Bank, downtown Jerusalem feels like another planet. I spent that night in a small apartment hotel off Jaffa Street, a few blocks from the Old City. It was a one-bedroom suite with a fully equipped kitchen and three-piece bathroom. The water was hot, the shower had walls and a showerhead, and I could drink the water. It was unlike many nights on the Masar.

Jaffa Street reminded me of places like Vienna or Vancouver: the pavement was so clean you could eat off of it. The pedestrian walkways alongside were spacious and wide, paved with smooth and even slate-gray tiles. The streetcars were sleek and punctual. Art galleries and museums, ornamental lights and public transportation, urban and urbane. First world versus developing; moneyed versus struggling. The contrast was deeply uncomfortable.

My friend Marta and I wound our way through the narrow, dreamlike alleyways of Nakhalat Tziyon, the walls lined with thick slabs of golden Jerusalem stone. A playful breeze danced through the trees. We stopped for lunch at a picturesque café, complete with colourful outdoor seating and painfully handsome servers. The food was delicious and expensive; we ordered hummus that came with falafel and sweet lemonade.

After lunch, I returned to the place I had been many years before. I followed the signs in the Old City, the pull magnetic, feeling a mix of dread and anticipation. I saw it first as before, from above, the top of the staircase leading down to the Kotel.

Few tourists were out today, just the heat and people praying. Orthodox tradition dictates separating the genders; indeed, on the women’s side, a fraction the size of the men’s, Torah scrolls are still officially prohibited. Today, the women’s side was packed, the men’s side dotted with the odd worshipper. At the tefillin tent, an old man shawled me in his tallit. A red-headed, black-hat wearing Charedi named Isaac helped me with the tefillin. He looked about my age, or a few years younger. In another life, I wondered, would I have been him?

“Did you do this yourself?” he asked, pointing to the forearm I had already bound.

“I did,” I said. For a month, in the intervening years, I had done it every morning. “I just can’t remember how to do the hand part.”

“I can help,” he said. Isaac said many things: about God, what God wanted, the prayers I could say at the Wall. “Sometimes, you might feel like the worst Jew ever,” he said. I didn’t. I never felt that way. I wasn’t a “good Jew” or a “bad Jew,” I was just Jewish.

Blocks of stone peppered with bits of paper: the wall hadn’t changed, but I had. I pressed my hand to it, feeling its soft, pockmarked face, and closed my eyes.

I’m home now, in Canada, and wonder about my travels. I came back “with eyes wide open,” as my rabbi had prayed: to the painful, joy-filled and resilient lives of the Palestinians I met. I think about the separation wall and the Kotel, how they’re connected and what it meant to pray at them, different but related prayers. If the Wailing Wall is part of us as Jews, then perhaps its future and our spiritual liberation is bound together with the separation wall. Perhaps the Kotel will never truly be honoured until we bring down the separation wall. As I contemplate the stories of our freedom from bondage, I’m reminded of the idea that our liberation, spiritual and otherwise, is bound up with the liberation of others.

Kevin Keystone is a Toronto-based freelance writer, editor and researcher. When not hiking long-distance trails, he can be found reading, spending time with friends and family, or with his beloved partner, Aaron. His writing has been published in the Literary Review of Canada, the Jewish Independent and Good Old Boat. For this series, he thanks the guides and staff of Siraj (the Masar Ibrahim Thru-Hike tour operator), the host families and locals he met along the way and his fellow hikers, as well as friend and editor Matt O’Grady.