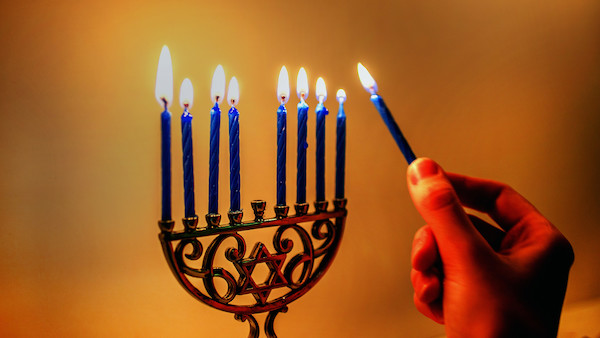 This Chanukah, kindle the light of liberation, not just for you and your loved ones, but for all people whose freedom of expression is threatened. (photo by Robert Couse-Baker / flickr.com)

In a time of identity searching, introspection and anticipation, Chanukah can be an inviting space to reflect and refract the light before us. From the Chanukah that was to the Chanukah we arrive at, the world has shifted and we are not the same. This holiday of chocolate, oil and games of dreidel beckons us into a moment of contemplation.

Chanukah expresses a language of novelty, innovation and a miraculous expansion from what we thought was possible. The ease and accessibility, the simplicity of candles, the sense that Chanukah is predictable and performative belies the very creative, radical nature of the Festival of Lights.

The annual Chanukah experience, at its core, is an opportunity to receive new insight, empowerment and opportunity to overcome the forces that oppress, debase and deny our most essential identities. Had the few Maccabees not searched to provide that light for the many, none of us would have a miracle to celebrate today. Even though we are privileged to be able to publicly observe our traditions, Chanukah reminds us that our work is not complete until everyone can safely and freely express their identities.

One of the unique aspects of Chanukah is that it is the only festival that occurs in two different months. It is literally positioned between Kislev and Tevet to help us be aware and adapt to changing times. In the light of the candles, it is possible to see our roles anew, clarifying our commitment to ensuring that the privilege and expression of being is available to everyone.

Our rabbis teach that this attribute of adding is connected to Joseph, whose story we read on Shabbat Chanukah. Joseph’s name means to increase, and his story reveals the relationship between proximity and visibility. The Talmud, Shabbat 22a, juxtaposes the narrative of Joseph being thrown into a pit with the laws detailing the proper placement of the menorah and the limits on how far off the ground it can be.

In Genesis 37:18, Joseph’s brothers “saw [Joseph] from afar … and they conspired against him.” They throw him into a pit, which Genesis 37:24 says “was empty and didn’t have water.” But the rabbis disagree, arguing that, while “empty” implies that the pit didn’t have water in it, it was not without venomous pit-dwellers. There were snakes and scorpions that the brothers didn’t know about, because they were not close enough to the pit to see.

Moreover, the distance at which the brothers first saw Joseph approaching made it easy for them to plot against him. In not one, but two cases, the brothers’ lack of proximity leads to actions that degrade and humiliate. If only they waited to see their little brother up close before acting, they might have changed their plan. If only they approached the pit to look inside, they might have seen the snakes and scorpions. The Torah is clear: proximity and visibility lead to responsibility.

It is for that reason the Talmud instructs us that we cannot place a menorah too far off of the ground – we must be close enough to see and be affected by the candles. If the menorah can’t be seen, we miss the message of the miracle, and the opportunity to take responsibility is lost.

The Hasmoneans were descendants of Aaron, who, the Mishnah tells us, was a lover of peace, pursuer of peace and lover of peoples.

Judaism is a religion of action, and we must be practitioners of our tradition’s wisdom by taking responsibility.

Today, even with technologies that keep us connected across oceans and continents, we understand the challenge and, more so, the threat of being too distant. Jews have a response to prevent the dehumanization that often comes when we are distanced from the lived experience of others – draw in close.

A great miracle happens with allyship

The Hebrew words behind the story of Chanukah and Joseph also reaffirm the holiday’s charge to increase visibility, to be an ally. The rabbis saw our world as created through speech and language and, thus, all Hebrew letters represent hidden truths. Just like the story of Joseph in the pit, the closer you look, the more that is revealed.

The mystics teach that the Hebrew letters for Greece (Yavan is spelled yud, vav, nun) are three lines that descend as the word progresses. The great and mighty culture that claimed elite thought and refinement was in fact a culture that debased and denigrated. Greek leadership prioritized the body over the spirit; what was seen on the outside was of greater value than that which was within. Thus, it could be said that Greece, by elevating the external, actually debases it, a message hidden within the descending letters: yud, vav, nun.

The Hebrew word for Joseph, Yosef, begins with the same first two letters. But the third letter is where the comparison is stark. Instead of a nun sofit (a nun at the end of a word), which is a straight line going down, we have the round letter samech, a symbol for equality. Unlike the hierarchy of the nun, the circle of the samech allows every point on its circumference to be equidistant to the centre. Joseph chooses to chaver (friend) up and stops the descent by treating others as equals.

The nun and samech form the word miracle, nes. The first letter, nun, is the only letter in Hebrew that doesn’t appear in the alphabetical acrostic of the prayer Ashrei. Our rabbis explain that this letter stands for nefela, falling, and, therefore, is omitted. The next letter in the alphabet is the samech and it starts the Ashrei verse, “samech l’chol hanoflim,” “supporting all those who have fallen.” Jews in those days, as in ours, had a choice between the “nun” and the “samech” – to align with the oppressors and feel secure or to ally with those who needed support. In choosing the latter, a great miracle (nes) happened there.

As the story and words of Chanukah convey, the Jewish response to oppression is not just to be free but to dismantle the system of oppression and provide equality for others. Today, we place a menorah in the window in order to publicize our engagement in the ancient and ongoing story of this struggle. We stand up in broken places of despair and hopelessness to rededicate ourselves and our institutions to this cause. Now, when we see an injustice, when we are proximate to the dehumanization of a child of G-d, we not only see the unholy act itself but also we recognize the imperative to respond.

This Chanukah, kindle the light of liberation, not just for you and your loved ones, but for all people whose freedom of expression is threatened. Kindle a light to banish the darkness of hatred, racism, transphobia and misogyny. Kindle a light that signals to outsiders that you are a home (or an organization) committed to rededication and the recreation of holy space, particularly in the most broken of places.

Chanukah was not immediately established as a holiday. The Talmud teaches that the rabbis waited until the following year to institute a permanent commemoration. When they realized that the miracle could be replicated – that, in every generation, Jews could learn to take the little they had and turn it into something miraculous – they created the holiday. That is the holy ask of Chanukah: to be the light that can extend and expand, to be the miracle that someone else needs.

Michael Walzer writes that “wherever we go, it is eternally Egypt,” but that there is a Promised Land, and the only way to make it across the wilderness is by “joining hands, marching together.” The story of oppression and liberation is also a story of allyship. We will not survive without hands to support and guide us, to hold and elevate us. This year, on Chanukah, be the light and bring the light out of the closet and into the world.

Rabbi Mike Moskowitz is scholar-in-residence of trans and queer Jewish studies at Congregation Beit Simchat Torah in New York and Rabbi Dara Frimmer is senior rabbi at Temple Isaiah in Los Angeles. This article was originally published in the Jewish Journal and articles by other Shalom Hartman Institute scholars can be found at shalomhartman.org.