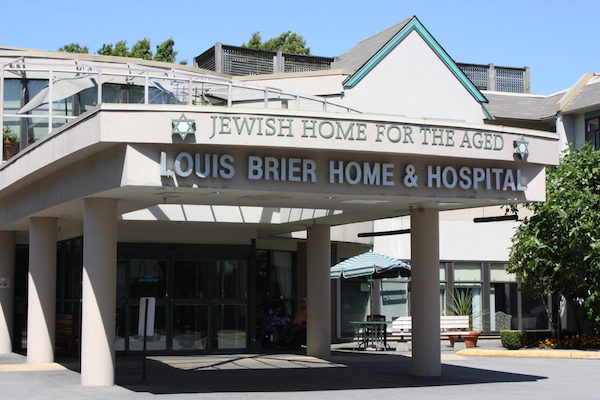 Louis Brier Home and Hospital is one of 88 care homes across British Columbia to receive funding to purchase new safety equipment, as part of the Seniors Safety and Quality Improvement Program (or SSQIP, pronounced “SKWIP”) initiative. The Brier will receive $60,576 of the total $2.6 million in provincial funding allocated.

SSQIP is managed by B.C. Care Providers Association (BCCPA), who process applications from all residential care homes that receive public funding for new equipment intended to improve safety and quality of life for residents. Oversight of SSQIP is provided by representatives from the Ministry of Health, BCCPA, Denominational Health Association and SafeCare BC. Approved applicants may receive up to $500 for each publicly funded resident.

“Our government is proud to invest in thisprogram, which will go towards purchasing new beds to help improve safety andquality of life for those living in residential care homes,” said GeorgeHeyman, MLA for Vancouver-Fairview, who presented the cheque at the Brier onDec. 6. “It’s great to see that Louis Brier Home and Hospital and seniors inVancouver will benefit from new equipment.”In addition to beds and mattress purchases,care homes are investing in new shower chairs, tubs, mobility equipment (suchas floor and ceiling lifts), lighting and visual aids, sensory rooms, musictherapy and ergonomic furniture. Preventative and urgent response systems arealso funded to promote both resident and employee safety.For more information, visitbccare.ca/programs/ssqip.

Attendees at the Nov. 16 event at the Louis Brier Home and Hospital check out the Gallery of Donors Wall. (photo from Louis Brier Jewish Aged Foundation)

On Nov. 16, the Louis Brier Jewish Aged Foundation honored donors on its Gallery of Donors Wall, located in the walkway linking the Louis Brier Home and Hospital and the Weinberg Residence. The afternoon celebration, which was attended by more than 100 people, was led by event chair Lisa Sirlin, who introduced foundation president Harry Lipetz.

Lipetz spoke of the importance of donors to the vitality of both the Louis Brier and the Weinberg. He also thanked Dvori Balshine, who retired last month from the foundation after 12 years as its director of development.

Louis Brier board chair Arny Abramson thanked all of the donors as well for their continued support and chief executive officer Bob Breen detailed how the funding from the foundation is being used. Breen emphasized that the Louis Brier is the only home in the Lower Mainland that staffs several full-time occupational therapists and physiotherapists, as well as a full-time music therapist.

The Sunday afternoon event hosted donors, friends, family and residents, who enjoyed performances by the JCC Or Chadash dancers, musical interludes from Annette Wertman on piano, and the jazz duo Dave Ivaz and Julie Boton. The audience was in full spirits as they moved from the social hall to the boardroom, where the Zalkow family were honored for their donation towards its renovation and a plaque was unveiled, honoring the Edith Lando Charitable Foundation for its donation of audiovisual equipment.

Attendees then moved on to the Gallery of Donors Wall, where Rabbi Yitzchak Wineberg was on hand to say Shehecheyanu, as guests enjoyed a l’chaim. The wall was marked with green, yellow and purple bows, delineating donors who participated in the Maintain, Sustain and Enhance 2014-2016 campaign, plaques moving to a higher category and new donors on the wall. Final words were given by Balshine, who conveyed her appreciation to all the donors, emphasizing that their support is vital to the Brier and the Weinberg Residence.

On Thursday, Oct. 23, Louis Brier Home and Hospital hosted an exhibit of accomplished artist and resident Toby Nadler’s work. The exhibit was open to all residents.

In 1970, Nadler began to study oil painting at the Montreal Museum of Fine Art with the late Arthur Lismer, one of Canada’s Group of Seven. After completing a teacher’s certificate at Macdonald College in Montreal, she spent four years teaching children at elementary schools in Montreal’s inner city, where art was one of the subjects, and took evening art courses at Concordia University. She graduated from Concordia in 1980 with a bachelor of fine arts degree, majoring in studio art.

Later, she studied watercolor and multimedia art with Judy Garfin, a Vancouver artist, at McGill University. After a few years, Nadler became interested in Chinese watercolors and calligraphy, and studied privately with a group of other Westerners. The teacher was Virginia Chang, who exhibited her students’ work.

In 1984, Nadler and her late husband Moe moved to Vancouver. Nadler wished to continue studying Chinese art in her new city. She also studied Mandarin at the Chinese library and watercolors with Nigel Szeto at the Chinese Cultural Centre. He was impressed with her work but, after seeing her Western paintings, recommended she continue with her own style, as her personality did not come across in the Chinese paintings to the same degree.

Nadler joined the English Bay Arts Club and the University Women’s Club, where she studied watercolor with various artists, as well as exhibiting there. After a few years, she became an active member of the Federation of Canadian Artists. She volunteered and took courses with their artists and exhibited her own work around the city, including at the Vancouver Public Library. During an exhibit at Oakridge Shopping Centre, an art dealer from Hong Kong admired her work and wanted to know if she had unframed paintings, so that he could roll them up and ship them to his two galleries in Hong Kong. He bought 10 works.

Studying with Lone Tratt, Nadler took watercolor and acrylic courses at the Jewish Community Centre of Greater Vancouver, where she also exhibited. Upon request, she donated six of her paintings to decorate their seniors lounge. Her home was decorated with many of her paintings.

A resident of Louis Brier since August 2014, Nadler still occasionally paints at her leisure. The Louis Brier Jewish Aged Foundation accepted her donation of more than 10 paintings as part of their collection to decorate the halls of the home. They also have another few pieces, which they will use to decorate the interior of residents’ and staff rooms. It is hoped that her unique style will bring pleasure to all who see them.

At the Oct. 23 exhibit, Nadler’s son, Peter Nadler, spoke, giving a history of his mother as an artist, and Dvori Balshine thanked Nadler for all of her artwork donations. Music therapist Megan Goudreau and recreational therapist Ginger Lerner composed and performed an original song in Nadler’s honor about her contributions to the art world.