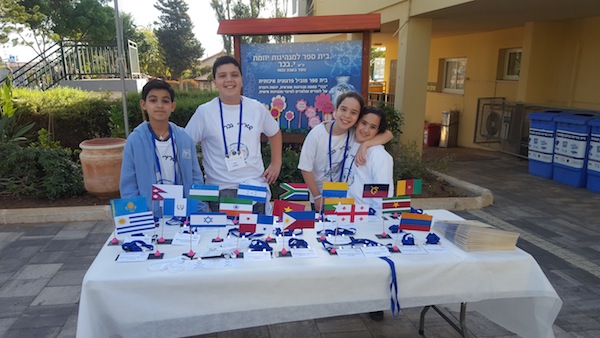 Students at the Bachar school in Even Yehuda, which educates for leadership and entrepreneurship, prepare to welcome a delegation of educators from developing countries, who came to learn how Israeli schools educate for entrepreneurship. (photo from Galit Zamler)

For Galit Zamler, a course that began as a volunteer position at one school has become a full-time job, with more and more schools picking up her program.

In 2009, when Zamler’s third child was in Grade 6, his school principal wanted to have an after-school activity. She brought representatives of a company that was not only expensive to hire, but would only present to outstanding students, and required at least 20 of them.

Seeing the value of educating kids about entrepreneurship, Zamler – who has an MBA and has co-founded two businesses – told the principal that she would do such a presentation at no charge, as long as her son could be one of the participants. A month later, Zamler was teaching her first group of 12 children. She knew she was onto something great after she had sent the students’ parents notes about what was being taught, and the parents responded with thank you letters.

Word spread and, after volunteering for six years, Zamler turned her volunteer work into a full-time career. Now, 10 years into it, she said, “At the beginning of the course, I’d count each one of them, but now there are a lot of schools and there’s awareness of the need to teach entrepreneurship. I don’t need to go and try to convince anyone. They are going out looking for it.”

One of the first things Zamler teaches is that there are different kinds of entrepreneurs. It is not strictly about entrepreneurs of technology or inventions, and it is not just about opening a business. Students are taught that, to succeed, one must stand out from others – be creative and make their initiative unique.

“Then, they raise ideas and learn that there are no bad ideas,” said Zamler. “Each idea can be good and that’s how we do it. Being critical will prevent others from raising ideas. It’s very important that the class be open-minded and let everyone, whatever their idea, say it aloud and learn to explain it. Sometimes, what they have in their head is not clear to the others. They learn to stand in front of the class and explain their ideas.

“It’s not that every idea is great,” she clarified. “It’s just that we won’t criticize ideas. We ask questions to understand, and we discuss what difficulties we see in ideas – things like, how much it will cost, who will need it, to take a good look at it.

“Sometimes, this makes the student drop an idea, because they understand it can’t be implemented…. For example, there was a student who said she wanted every student to have a cupboard in the class to put their books into. The kids asked where she would put them, with very little space. And, she realized it couldn’t be done.”

Once all the ideas are shared with the class, students start to determine which ones they like the most and come up with business plans – tackling the process like a cake recipe, considering which ingredients they will need to bring their concepts to life. This includes the physical elements, as well as how to make their business unique, part of which involves seeking advice from experts in various fields to see if any changes might be needed.

Only then do the students try to implement their project, which can sometimes be as simple as composing a letter to the municipality.

“I have a school that wanted to have a gym,” said Zamler. “But, the school is small and there’s no place. So, they wrote a letter. The municipality sent an expert to explain why it can’t be done, but gave them money to buy equipment for activities they can move from place to place; using it outside and bringing it back inside as needed. And, they were satisfied with this.”

The curriculum is offered to grades 2 through 9 in Israel and it is funded in part by the government, as principals are allowed some leeway to allocate funds as they see fit within a list of external programs pre-approved by the Ministry of Education.

“Sometimes, they teach it as a science class,” said Zamler. “Other times, it is categorized as a life skills lesson in the curriculum … and, when the school principal thinks it’s important, he or she finds a way.”

Zamler – and other parents – consider the entrepreneurship course a great addition to what is being taught in school, as it will help in practically every aspect of life.

“I think, sometimes, it’s the parents that bring the program to the schools, because they know that children learn something useful for life … not just the ordinary curriculum,” which includes things that may not “help them when they grow up, as things change so quickly,” said Zamler.

Even armed with this entrepreneurial knowledge, Zamler acknowledged that the overwhelming majority of students – 90% to 95% – will end up as employees. But, she is hoping they will be leader employees.

“I was an employee with entrepreneur skills, and that’s what helped me go from the bottom up to management,” she said. “Being an entrepreneur in an organization means that you think big, you do more than you are told. Those are the kinds of workers we need in the workforce.”

While Zamler has not yet conducted follow-up studies on the students who have taken the program, other countries are taking note and looking for ways to implement the program in their own schools.

“The foreign office brings delegations to Israel twice a year and takes them to a school that educates for entrepreneurship,” said Zamler. “And what we see is that, instead of students who don’t like to go to school, we see students who are really enjoying their time in school, because they have choices.

“The army is also looking for these kinds of students…. If they don’t have these kinds of skills – persistence, creativity, and working on team goals – the army doesn’t want them. We know it helps them in the future, in the army and, I think, the workforce.”

The Hebrew Academy in Miami Beach was the first school outside of Israel to implement the program. Also, a company from Hong Kong has purchased the licence to bring the program there.

“They do amazing things there and they’re opening more and more classes,” Zamler said of Hong Kong. “But, there, it is an after-school activity, because it’s hard to bring it into the public school curriculum.”

Zamler has created an online training program for both students and teachers wanting to bring entrepreneurship into their school. For more information, visit tomorrowsuccess.com.