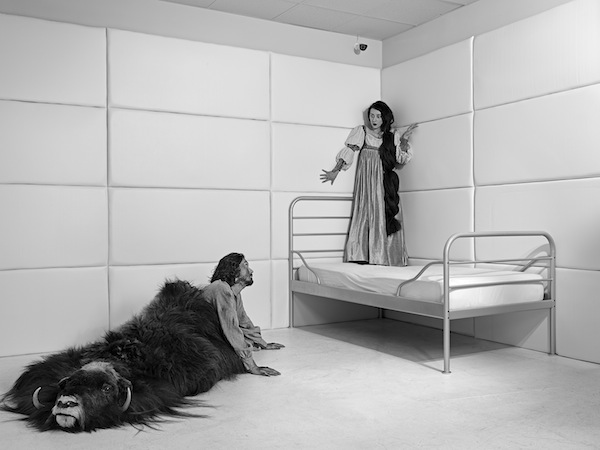 Left to right are Dávid Szigeti (cello), Erik Gow (who plays Alvin Kelby), Kevin Woo (clarinet), Wendy Bross Stuart (piano, music director) and Chris Adams (who plays Thomas Weaver), in rehearsal for The Story of My Life, which is at the Canadian Music Centre for five remaining performances, Nov. 25 and 30, Dec. 1 and 2, 8 p.m., and Nov. 26, 2 p.m. (photo by Ron Stuart)

Directed by Stephen Aberle, this story of friendship is an intimate and moving portrayal, performed by a talented and hardworking ensemble. I got a sneak peak at the production earlier this week. It had me laughing. I related to both of the characters (their good and more challenging traits/actions) and the actors had great chemistry and intensity. By the end, I was crying. It starts with Thomas trying to write the eulogy of his boyhood friend Alvin, and it takes the audience through some of the stories of their lives. The music is wonderful and the performers are top-notch. See it if you can.

Tickets can be purchased from eventbrite.com.

Stephen Aberle as Dan and Annabel Kershaw as Sue reflect on their life together in Snapshots: A Musical Scrapbook, at Presentation House Theatre Oct. 28-Nov. 8. (photo by Megan Verhey, Megan Verhey Photography)

Theatre often allows us, the audience, a safe place in which to experience feelings that we are more guarded about showing in daily life. It can offer a way in which to reflect on our own lives and actions without the vulnerability that such introspection usually entails in “real life.” We can learn from what we witness on stage, whether a comedy, a drama or something in between. At the least, we can escape from our own cares for a time, immersing ourselves in someone else’s joys and pains. A perfect example? Snapshots: A Musical Scrapbook.

So popular was last year’s Canadian première of the show in Vancouver at Studio 1398, that WRS Productions – Ron and Wendy Stuart – is bringing it back for 12-day run at North Vancouver’s Presentation House Theatre, Oct. 28-Nov. 8.

“The response was amazing,” Wendy Bross Stuart told the Independent about last year’s production. “People laughed. People wept. Tissues were in short supply. The actors were very moved by the content and the music of Snapshots. The last five shows were completely sold out; people were turned away at the door. It was at that point that Ron and I decided we would seek the opportunity to remount the show.”

In Snapshots, Sue is set to leave her husband Dan after 30 years of marriage. While she is going through the attic, Dan comes home. A box of photographs (snapshots) falls open, leading the couple to reflect on their life together.

Conceived by Michael Scheman and David Stern, composer/lyricist Stephen Schwartz adapted music from his stage shows, feature films and original CDs to mesh with the book by Stern, which takes the audience back to Dan and Sue’s earlier days.

In the WRS Productions’ show, Dan and Sue are portrayed by Stephen Aberle and Annabel Kershaw; Daniel and Susan, by Steve Maddock and Jocelyn Gauthier; Danny and Susie, by Daniel Johnston and Georgia Swinton.

About the ways in which he personally related – or not – to Dan throughout the character’s life, Aberle said, “Hmm, well, younger Danny/Daniel has a winning way with women. Many, many women. I was definitely not like that growing up; I was shy and repressed and a bit of a goob, I guess.

“On the other hand, when Dan truly falls in love, he falls hard and he stays fallen. I identify with that. While he has this playboy past, he’s careful about where he really gives his heart, and he finds it hard to put the truth of his love into words. I think that’s the central struggle in the play for him. Casual physical intimacy comes easily to him (unlike me!), but he’s scared by commitment and emotional intimacy. He’s experienced deep hurt in the past, and he fears opening up too far because he doesn’t want to get hurt like that again. I get that.

“Details from the past – talismans, little triggers for powerful memories – really get to him. I guess they get to all of us one way or another, so it’s not necessarily a specific character thing, but it resonates for me.”

Like Aberle, most of the actors are reprising their roles, but there have been changes, and not only in casting.

“Last year’s Snapshots was in a ‘black box’ theatre,” explained Stuart. “This gave us the opportunity to configure the show ‘in the round.’ The set design was done by Jessica Oostergo.

“This year, we are working in partnership with Presentation House Theatre in North Vancouver. We are in a traditional theatre space. This meant the show needed to be completely reconfigured. With the experienced hand of Pam Johnson, we have a brilliant set – full of secret entrances and exits. This design is in conjunction with our new director and choreographer, one of Canada’s most sought-after and experienced, Max Reimer, former artistic director at the Vancouver Playhouse. The show will look very different.

“In addition, we have two new cast members: Daniel is played by Steve Maddock and Susie is played by Georgia Swinton. The rehearsals are very exciting; we have a chance, now, to add new interpretation and shape to the music. The sound of the ensemble is thrilling!”

Aberle spoke about the ensemble and what it feels like to have different actors “all playing aspects of the same role.”

“The other performers playing Danny and Daniel – my character’s younger selves – give me ideas about Dan that I wouldn’t necessarily have come up with on my own,” he explained. “There’s a lot of give and take. We have an opportunity to develop a shared physical vocabulary, for example: postural or gestural or vocal details that stay with the character as he grows older. That’s a lot of fun to explore.

“We’re all, all six of us – along with the band and the creative team – sharing the task of bringing this decades-long, deep relationship to life. One intriguing consequence is that I get to fall in love on stage with not just one woman but three. I have a lot of interplay with all three of Sue, Susan and Susie. When I’m watching them, the younger selves of the love of my life, remembering how we met as kids and how much we meant and gave to each other, it’s profoundly moving.

“It’s interesting,” he continued, “to relate on stage to my character’s younger selves. We don’t get a lot of direct connection but there are important moments, of both frustration and understanding. In real life, we don’t get to say to our younger self, ‘You idiot! Not that way, this way!’ It’s refreshing. It’s also illuminating to see how patterns set in youth change, or don’t change, in later life.”

And what is it about Schwartz’s music that touches people so much?

“I will speak more specifically about the music in Snapshots,” said Stuart, who also wears the music director and pianist hats in this production. “Here, we have examples of Stephen Schwartz’s music from as early as 1971 (Godspell) and as recently as Wicked (2003)…. Schwartz chose the songs to move the new story (book by David Stern) forward in the most compelling way. About 85% of the story is told in music.

“This plot line allows two characters to each communicate with themselves at different stages of their lives. Stated differently, we have a story that takes place 1) in the present, 2) in the past and 3) in one’s interior life. The music is not simply one song after another, it is multi-layered, with (formerly unrelated) songs performed simultaneously in gorgeous counterpoint with one another.

“I truly feel that the music and lyrics (often changed by Schwartz himself to fit the arc of the new story) can simply be enjoyed for their depth of meaning, their melodic interest and their beautiful harmonies. However, for those who know Stephen Schwartz’s music, the complexity and brilliance of the multi-layered nature of this work are simply breathtaking.”

Stuart added, “Yesterday at rehearsal, we had many moments when we simply had to stop. The actors were so ferklempt (choked up with emotion), they were unable to continue. I feel the same way.”

For tickets to Snapshots, visit phtheatre.org, call 604-990-3474 or drop by Presentation House Theatre, at 333 Chesterfield Ave.