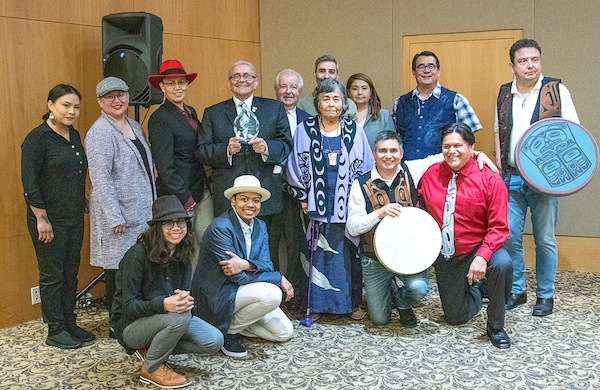 On May 25, the Centre for Israel and Jewish Affairs honoured Chief Dr. Robert Joseph (holding the sculpture) with the Victor Goldbloom Award for Outstanding Interfaith Leadership. (photo from CIJA)

On May 25, the Centre for Israel and Jewish Affairs honoured Chief Dr. Robert Joseph with the Victor Goldbloom Award for Outstanding Interfaith Leadership.

In memory of the late Dr. Victor Goldbloom, the Victor Goldbloom Award recognizes the contributions of leaders from various faith communities in advancing interfaith relations.

Joseph is a hereditary chief of the Gwawaenuk First Nation and the founder and current ambassador for Reconciliation Canada, an Indigenous organization dedicated to dialogue with multifaith and multicultural communities. He is also the former executive director of the Indian Residential School Survivors Society and a member of the National Assembly of First Nation Elders Council. As a result of his work, he has received numerous awards and recognition for bringing people of different faiths together.

Joseph is a dear friend to the Jewish community who has worked with Robbie Waisman, a Holocaust survivor, to make connections between survivors of the Holocaust and the residential schools.

On May 26, representatives from the Sikh, Roman Catholic, Evangelical, Ismaili, Muslim, Ahmadiyya, Ukrainian Catholic, Anglican, Baha’i and Black-Canadian communities, as well as Indigenous leaders, joined to celebrate Chief Joseph’s lifetime of work serving British Columbia, urging people of all faiths toward truth and reconciliation, and renewing relationships between Indigenous people and all Canadians.

The Maccabiah Games take place every four years in Israel, and the 21st Maccabiah will take place July 12-26, with some 10,000 athletes from 80 countries competing in more than 40 sports. Seven King David High School students were selected to play in a variety of sports and faculty member Matt Dichter is the coach for a basketball team. KDHS is so proud and wishes them all a successful time in Israel!

On May 31, Birthright Israel Excel selected 60 college students worldwide for its fellowship in business and technology, which began on June 7 and runs in Israel for 10 weeks. Forty participants are from the United States, while 20 come from Argentina, Brazil, Canada, Ecuador, France, Mexico, South Africa, Spain and the United Kingdom. Thirteen of them will be visiting Israel for the first time.

One of the participants is University of British Columbia Sauder School of Business student Zac Abelson, 21, who is majoring in commerce, with a double minor in operations and logistics, and entrepreneurship. He will be doing his internship with Deloitte.

Since 2011, the Birthright Israel Excel Fellowship has selected top students from hundreds of applicants for summer internships with leading business and tech companies in Tel Aviv. This year’s cohort features an equal number of women and men and the most first-time visitors to Israel. Their internships will be in such areas as environmental sustainability, software development, consulting, finance, venture capital, engineering, marketing, cybertech, biotech, business development and startup development. Students will intern each Israeli workweek, Sunday through Thursday, and attend an evening series of speakers from across Israeli society.

A core component is the one-on-one pairing between each Excel fellow and an Israeli, enabling the foreigners to acclimate quickly to the local culture and see the country through a more authentic lens than as typical tourists. Many peer-to-peer relationships grow into long-term friendships. Some have invested in each other’s business ventures.

Birthright Israel Excel fellows enjoy free time to explore Israel with their peers, and three weekend trips as a group bring them throughout the country: the north, typically including the Golan Heights, a winery tour and a rafting trip down the Jordan River; Jerusalem, including the Western Wall and the Machane Yehuda outdoor market; and the south, for a desert trek, a mud bath in the Dead Sea and a sunrise hike on Masada.

After their return home, the Excel fellows enter a network that provides resources for professional and personal development, Israel engagement and encouraging them as philanthropists.

Birthright Israel Excel fellows have gone on to positions at companies such as J.P. Morgan Chase, Bain & Company and Google. Others have developed strategic partnerships with Israeli companies and started their own companies, often hiring other fellows.

The release of the Truth and Reconciliation Commission of Canada report last year was a turning point in the relationship between Canada and its aboriginal peoples. It is part of a longer and ongoing trajectory of healing, according to Chief Dr. Robert Joseph, who is being honored this weekend as a courageous civic leader.

The Wallenberg-Sugihara Civil Courage Society was founded by members of the local Jewish and Swedish communities, including the honorary Swedish consul, to recognize individuals who help others at great risk to themselves. Joseph, hereditary chief of the Gwawaenuk First Nation on northern Vancouver Island, is the recipient of this year’s Wallenberg-Sugihara Civil Courage Award.

Joseph is ambassador for Reconciliation Canada, an organization intended to “revitalize the relationships among indigenous peoples and all Canadians,” and a member of the National Assembly of First Nations Elders Council.

“At significant personal risk and after facing severe oppression, Chief Dr. Robert Joseph courageously stood up against social injustice to help others,” notes the award citation. “As a residential school survivor, he courageously chose to publicly share his story and the consequences of the abuse and trauma he had endured. This was at a time when the indigenous community was conflicted about bringing the experiences in the residential schools to light and when the larger community was in denial about what happened. Chief Dr. Robert Joseph chose to turn his experience into a vehicle for healing through reconciliation and a will to make sure that this would never happen again.”

In an interview with the Independent, Joseph discussed the progress toward healing his community has made in recent decades.

“Our First Nations people were absolutely in deep despair, not understanding what had happened to us over the course of all that time that residential schools existed,” he said. “But, in the last 20 years, we’ve made remarkable, remarkable progress. And one of the breakthroughs in all of that was survivors like myself began to feel confident enough to tell our stories. We had been walking around in deep shame and despair and brokenness and suddenly we found a way to begin to tell our story.”

A crucial first step, he said, was the federal government’s 1998 Statement of Reconciliation. Though the statement itself was equivocal and not universally appreciated, Joseph said, it was accompanied by funds for survivors and resources for the affected communities.

“I was part of the movement because I was executive director for the Indian Residential School Survivors Society, which was the only organization of its kind at the time,” he said. “So, we began to hold meetings and circles where circles of survivors began to tell their stories and it was deeply, deeply liberating.”

The process expanded, he said, to include representatives of the churches who were complicit in the schools system and later the government and other Canadians.

“We began to recognize that indeed there is a common humanity that exists between all of us and if we can’t harness that common humanity, we’re going to always have these atrocities going on around the world,” he said. The Truth and Reconciliation Commission was a culmination of that progress and Joseph is uplifted by the response of Canadians since the report’s release last year.

“We’ve had a tremendous interest and response from many Canadians about their desire to reconcile,” he said. Even so, the impact of the report was double-edged, he said.

“When the Truth and Reconciliation Commission report was submitted in June, it said that because of a whole number of initiatives and policies, Canada had created, impacted, effected a cultural genocide against the aboriginal people of this country,” he explained. “For me, even as I sat and listened to that, it was sort of a bittersweet report. On the one hand, all of our suffering had been acknowledged and identified in this report. But, on the other hand, as a country together, you and I and everyone who are Canadians were told that genocide was a part of our history.”

He added that he is humbled to receive the Wallenberg-Sugihara Civil Courage Award, which is named in honor of Raoul Wallenberg and Chiune Sugihara, diplomats who, during the Second World War, risked their lives to save Jews from the Nazis.

“I’m really moved by the idea that people who suffered huge indignities, human suffering, who have been through it all like no one else has before, are thinking that somebody as little as I am can be acknowledged by them,” Joseph said.

As he prepares to receive his award, the chief said he is optimistic that Canada is at a crossroad.

“We are so blessed in this country,” he said. “We have all of the rainbow and color of the human race here and we have a chance to engage with each other, to nurture our relationships, to embrace our differences and indeed celebrate them.… But it calls us to our highest order as Canadians to be all that we can be in treating each other with respect and dignity because there is nothing more important than respect and dignity. I think that we are on the right path.”

Joseph will receive his award at an event on Sunday, Jan. 17, at 1:30 p.m., in the Wosk Auditorium at the Jewish Community Centre of Greater Vancouver. The ceremony will be followed by the screening of the film Carl Lutz: The Forgotten Hero, about a Swiss diplomat in Budapest who saved tens of thousands of Jews from the Nazis.