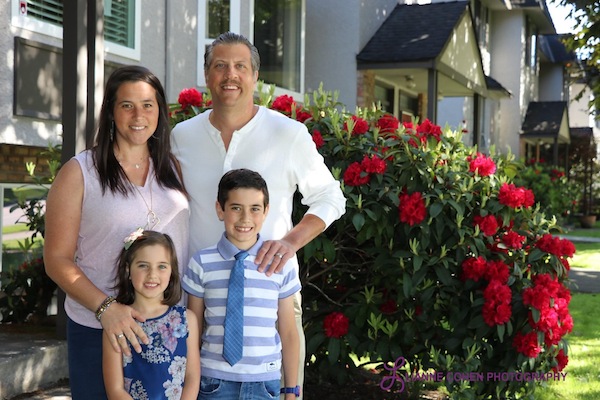 Michael Sachs, the new executive director of Jewish National Fund of Canada, Pacific region, with his wife Shira, a Hebrew and Judaics teacher at Vancouver Talmud Torah, and their children Izzy, 8, and Desi, 5-and-a-half. (photo by Michael Sachs)

The Jewish National Fund, founded by Theodor Herzl in 1901, is inextricably tied up in the history of the land and the state of Israel. Associated in the minds of generations of Diaspora Jews with planting trees in Israel, the agency – and its Canadian arm – have expanded into almost every area of civil infrastructure in that country.

The Jewish National Fund of Canada raises awareness and funds for projects that still include planting trees, but many years ago expanded into constructing water reservoirs, preserving natural habitats and building parks and bicycle trails. More recently, the focus has included social service infrastructures for vulnerable populations, such as at-risk youth, victims of domestic abuse, children with special needs, veterans and those with economic disadvantages.

For many years, JNF was represented in British Columbia by a shaliach, an emissary, sent here to advocate and raise funds for projects in Israel. Ilan Pilo was the last shaliach appointed and, when the Israeli office of JNF decided to stop funding the position, Jewish National Fund of Canada hired him and he continued in the role as executive director. Pilo and his family returned to Israel permanently this year after eight years in the community here.

Immediately after Passover, on April 5, Michael Sachs becomes the first non-Israeli to helm the Pacific region office. “I’m making history without doing anything,” he joked.

Sachs has spent the past decade working in the wholesale diamond sector as vice-president of sales at ERL Diamonds. In his off hours, he has been involved in an array of community organizations, including serving as president of the Bayit, a Richmond synagogue, during a time of exponential growth in membership. He has also served on the boards of the Kehila Society of Richmond, Vancouver Hebrew Academy, Tikva Housing, and on the development committee of Jewish Family Services. His efforts have been recognized both with a Jewish Independent 18 Under 36 Award, as well as a Jewish Federation of Greater Vancouver Young Leadership Award.

Although his community work has been extensive, Sachs may be familiar to most as a member of the family that ran Kaplan’s Deli for years. His mother and stepfather, Sally and Marshall Cramer, owned the restaurant and young Mike worked the counter.

“I always joked that one of the best sitcoms ever written would be something about being behind the counter of a Jewish deli because you hear everything that’s going on in the community, you meet everybody and it’s like watching a show,” he said.

In his early 20s, Sachs traveled to Israel on Birthright and he was transformed. “I came back and I longed for that connection,” he said, “because, when you’re there, it is electrifying through the soles of your feet; the energy, the buzz.”

Taking a leadership role in JNF may be a direct legacy of the impact of that visit.

Sachs refers to his new position as “an absolute dream.” He said, “Something like this is a once-in-a-lifetime opportunity.” And added, “JNF is, in my eyes, the global Jewish community’s hand in building Israel.”

Sachs and Pilo have been in contact and the former executive director will be on hand from his new home in Israel to assist virtually in the transition. Meanwhile, Sachs has set his sights on expanding the geographic reach of the Pacific region office. He aims to increase the agency’s presence in the Okanagan, on Vancouver Island and in the outlying Metro Vancouver communities.

Speaking before he formally takes on the role, Sachs said he doesn’t want to prejudge what changes might come, but he guarantees two things: “Excitement and energy.”

The staff of two in the regional office – Liisa King and Moran Nir – “do the work of five people,” he said.

“I don’t think I’ve ever seen such a group of dedicated community members as I have on the board of JNF,” he added, specifically citing Pacific region president Bernice Carmeli and vice-president Shannon Gorski.

Carmeli and Sachs would like to not only reach a broader geographic area, but a larger demographic. Just before the pandemic hit, Carmeli told the Independent, they were about to launch in earnest a new young adult division called JNF Future. As the reopening continues, both she and Sachs hope to develop that cohort and build a strong base of support among the next generation.

Carmeli sees Sachs, who turned 40 on March 27, as the ideal fit for expanding JNF’s message to wider audiences. She shares Sachs’ overt enthusiasm for the future.

“Onward and upward,” she said. “We have a new ED, a lot of exciting things are going to happen.”

On March 2, Lianna Philipp and Michael Solomon were recognized with the Jewish Federation of Greater Vancouver’s 2020 Young Leadership Awards, for their commitment and dedication to the Jewish community and the value of tikkun olam.

Philipp chaired Jewish Federation’s Axis steering committee from 2018 to 2020. Her outstanding leadership and devotion to the community have contributed to Axis’s many successes, and the implementation of programs that support Jewish Federation’s strategic priority of engaging the next generation. Philipp continues her leadership with Jewish Federation as a member of the board of directors, the Axis steering committee and the Ben-Gurion Society donor group. She also serves on the boards of Temple Sholom Synagogue and the Jewish Museum and Archives of British Columbia.

Solomon has been a driving force in the community as a dedicated volunteer with Jewish Family Services (JFS). In that capacity, he has made a tremendous contribution to several of JFS’s most vital initiatives, especially during COVID, such as their food security program. Solomon serves as an ambassador for the Jewish community, bringing his positivity and organizational talents to staff and his fellow volunteers.

The Jewish National Fund, Pacific Region, has hired Michael Sachs to serve as its executive director, effective April 5. The volunteers on the recruitment and selection committee were Bonnie Belzberg, Harvey Dales and Jonathon Leipsic.

Sachs brings a great deal of experience as a community lay leader, most recently serving as the president of the Bayit and volunteering with the Jewish Federation of Greater Vancouver, Centre for Israel and Jewish Affairs, Tikva Housing Society, Kehila Society of Richmond, and others. He was recognized with the Jewish Federation’s Young Leadership Award in 2017, as well as the Jewish Independent’s 18 under 36 Award. Moreover, he brings a wealth of experience from the business sector, as he served as the vice-president of sales and operations for ERL Diamonds.

Janelle Zwarych is Jewish Family Services’ new director of food security. Zwarych has a background in psychology and mental health. Most recently, she was the director of resource development and communications at the KidSafe Project. There, she was instrumental in creating a COVID emergency-response food program for Vancouver’s most vulnerable children and youth, while also raising operational and emergency funds.

Under community pressure, a Richmond auction house backed down from selling a collection of Nazi memorabilia last weekend. Maynards Fine Art and Antiques was set to auction items including Nazi flags, military items and other war-era artifacts on Saturday. Two days before that, the Centre for Israel and Jewish Affairs was made aware of the items by a member of the community.

“We spoke to the lead appraiser, the person in charge of auctioning this lot,” said Nico Slobinsky, CIJA’s Pacific region director. “We provided context and tried to explain why auctioning these items was morally reprehensible. I would love to be able to tell you that we got positive engagement and understanding at the time when we had those conversations on Thursday. We did not get that positive engagement. It was clear to us from the response from the auction house that they were going to go ahead with the auction as originally planned.”

Community members and elected officials quickly mobilized and media seized the story. Individuals messaged the auction company and politicians lined up in opposition to the sale. Two members of the legislature from Richmond, Jas Johal and John Yap, spoke out, as did Andrew Wilkinson, leader of the B.C. Liberals.

Mike Sachs, past president of the Richmond congregation the Bayit and a Jewish community activist in Richmond, mobilized his contacts – even while vacationing in Mexico. He said Richmond Mayor Malcolm Brodie not only spoke out against this incident but promised to proclaim Holocaust Awareness Day in January 2020.

“People were just disgusted that Maynards would do such a thing,” said Sachs. “As a whole, we all agree enough of profiting off Jewish blood. Enough. We’re not going to accept it anymore.”

Sachs and Slobinsky praised community allies who spoke up. They both believe that historical artifacts like these should be in museums or educational institutions, where they can serve as educational tools in proper context.

CIJA is asking Maynards for an apology and a donation to the Vancouver Holocaust Education Centre. The organization extended an offer to the undisclosed owner of the items to assist in placing them in an appropriate venue.