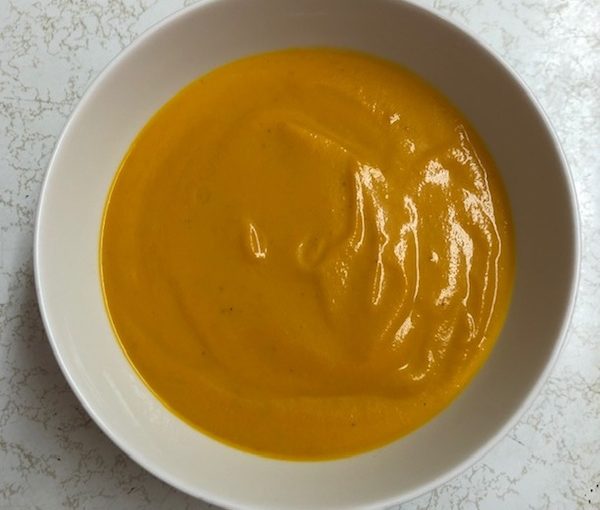 Cookie + Kate’s creamy roasted carrot soup, as made by the Accidental Balabusta. (photo by Shelley Civkin)

Nothing screams for comfort food quite like a COVID-19 pandemic. And nothing spells comfort food quite like soup. So, while the spirit of sharing is upon me, I present to you: roasted carrot soup. I’d love to say I made the recipe up, but you know I’d be lying. Credit where credit is due, and all that. It’s a recipe by blogger Kate, who, along with her canine sidekick, Cookie, make up the duo Cookie + Kate. (Why the dog gets top billing, I don’t know. Maybe he’s the taste-tester?)

I suppose it was one of these endless pandemic days where I was stumped for dinner ideas and thought – soup. It’s filling, especially if you add a nice sourdough or baguette, and you don’t need to make a bunch of other stuff, really. A salad, maybe? Perfect for lazy cooks.

The Cookie + Kate recipe is easy, if time-consuming, but you won’t regret it, I promise. And it’s creamy and dreamy, with no dairy in it at all. Prosaic as it sounds, this soup is like hitting the culinary lottery. Don’t be put off by the multitude of instructions; it’s worth every single one. Being a lover of platitudes, you know what they say – the journey of a thousand miles begins with a single step.

APPLE RUM NOODLE KUGEL
(Since it is mere weeks until Pesach, now is the time to get your kugel on. This one is a boozy take on the traditional apple noodle kugel. It’s sweet, slightly alcoholic and scrumptious.)

The rum makes it just a little naughty, and exceedingly rich-tasting. Definitely company-worthy. Not that we can have people over during a pandemic, but still. Like my father Sidney, alav hashalom, used to say: “I’m the most important company in my own home!” That, by the way, was his standard response whenever anyone asked him why he always used a linen napkin (even at breakfast). The fact was, the paper ones slipped off his lap, but never mind. He deserved the best.

When everything you need to know about 2020 (and 2021, so far) can be summed up by Velcro, Spandex, Zoom and facemasks, it’s nice to kick it up a notch just for, well, no good reason at all, except that you can. So, treat yourself to a little mid-week decadence and throw in that kugel rum. You might even want to indulge in a little shot glass of the stuff before dinner, just to round out the meal. Or not. 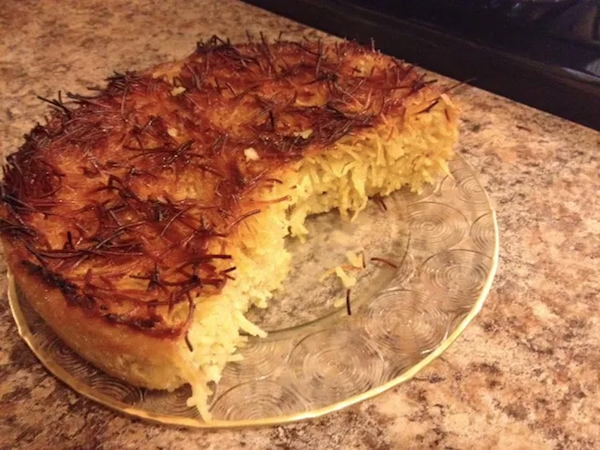 If I’d known the world was going to be locked down because of the COVID-19 pandemic, I would have stocked up on toilet paper, disinfecting wipes and pasta much sooner. Of course, only one of those is edible.

Desperate measures call for desperate times and, when so many restaurants have closed, cooking has become mandatory. As has self-isolation. Sure, we could order takeout, but I’m still slightly paranoid about who cooks my food. After all, you’re only as healthy as the last person you were in contact with. I rest my case.

I’ve tried to be creative in the kitchen, but, when you’re used to eating sushi at least once a week and shopping for fresh food every day, it gets challenging during a lockdown. Now we eat more pasta. Way more pasta. My husband Harvey loves it. Me, not so much.

Harvey does a Costco run every so often to stock up, but I’m loathe to send him out into the dangerous spittle-filled world of COVID coughs right now. And the regular stores are often out of the basics, at least until recently. To be completely frank, I’m sick of cooking. So, what’s an accidental balabusta to do?

I’ll tell you what I did. I handed Harvey my mother’s tattered Jewish Council Cookbook the other day and pronounced: “Make something!” So, what does he choose from all those geshmak recipes? Tuna noodle casserole. You know the one – it’s composed of Campbell’s cream of mushroom soup, Kraft Dinner and a can or two of tuna. If you want to get really fancy shmancy, you can grate some aged cheddar cheese on top. It’s the quintessential comfort food. Minus the sushi. Or, in Harvey’s case, minus the tuna.

My first dip of the fork into the ooey-gooey goodness of the tuna noodle casserole elicited a squeal of surprise. It was actually delicious. Processed deliciousness, but nonetheless yummy in the extreme. The tummy wants what the tummy wants. After a few bites, I expressed my perplexity that I didn’t taste the tuna. Harvey said it had probably sunk to the bottom, so I did a deep dive to the base of the casserole dish, and … bupkis. Harvey had a go at it and, likewise, nada. He humbly walked over to the fridge, opened it, and sheepishly admitted that he’d forgotten to put in the tuna. So, we were eating KD with mushroom soup and a crusty topping of melted cheddar. It was still superb, in a plebian sort of way. Does this count as accidental balabatishness? I didn’t think so. Even if it did, I wasn’t the balabusta who made it.

I’m not proud of what we ate. But I’m sure other people have eaten worse. Much worse. Think fried Spam. Or headcheese (whatever that is). Nobody is going to raise their hand and cop to either of those atrocities, but, trust me, I know where the bodies are buried.

In the end, a casserole that I thought was going to feed us for two nights lasted three. Kind of like a tuna-based Chanukah miracle – the “excess” tuna gave its life for a couple of sandwiches, to boot. The real victory was that I didn’t have to cook for three whole nights.

Don’t think I can’t hear you yelling, “What’s the matter with you people? Haven’t you ever heard of salads?!” Well, yes, as a matter of fact, I have. And, as much as I love salads, it’s not a mutual admiration alliance. Harvey buys pre-bagged salads for himself as a side dish, but rarely do we eat a jacked-up salad for the main course. It could very well land me in the hospital, and I choose not to take that chance. Digestion issues.

By rights, I should probably have scurvy by now, but I have thankfully dodged that bullet. To get some colour in my food, I put steamed or roasted carrots in everything. Sometimes, I even eat broccoli. Is my diet restrictive? Sure. Am I relatively healthy, nonetheless? Yes – the operative word being relatively. My body happens to do well on protein. Lots and lots of protein. Animal protein. I’ll own it: I’m a card-carrying carnivore. Don’t judge me. In case you care, I used to switch things up with more varied restaurant food before COVID-19 came calling. But now that I’m relegated to my own culinary wits, things have gotten kind of serious. And not in a good way.

I am jonesing pretty bad for some agedashi tofu and salmon sashimi, but I don’t dare eat that now. I heard that, if you get takeout food, the first thing you should do is transfer it to your own dishes and reheat it in the microwave to kill off any viruses or bacteria. That’s fine for cooked food, but I believe that eating sashimi during a COVID-19 pandemic is like sticking a hand grenade in your mouth and hoping to have a pleasant day.

Desperate for some variety, I dug through my recipes and came across one for Jerusalem kugel. It still counts as pasta, but I view it as a more cultured, genteel pasta. Usually a side dish, I knew I could convince Harvey that it’s a main (especially if I served him enough of it). I figure I’ll follow it up with a roasted carrot/yam chaser. This particular kugel is satisfyingly savoury and sweet, and the recipe is by Jamie Geller.

May this COVID-19 pandemic be over with soon. In the meantime, as Dr. Bonnie Henry says: “Be kind. Be Calm. Stay safe.” As for the Accidental Balabusta, figuring out what to cook every night should be my worst problem. Ever.