On the 14th floor of Edmonton’s Our Parents’ Home, one can enjoy panoramic views. (photo from OPH)

Lesley Jacobson assisted Irving Kipnes on the project for more than a decade, until recently retiring.

Jacobson grew up in Sydney, Australia. She made her way to Calgary in the early 1970s, a place she called home for 27 years, before moving to Edmonton some 20 years ago. “I was always involved in [Jewish] federations in some way or the other,” she told the Independent.

About 12 years ago, Jacobson began working for Delcon Development, which was founded by Kipnes.

“Irv is one of the major proponents of this [OPH] project, and has been on the committee working to develop this facility for over 20 years,” said Jacobson.

The project was incorporated as a nonprofit organization under the Society Act of Canada in 1996, and obtained a charitable number from Revenue Canada that same year.

“It wasn’t until about a dozen years ago, after fundraising and much discussion about what the project should entail that the committee determined to move ahead,” said Jacobson. “Irv took the lead in that, and started investigating sites and plans seriously.”

The committee included Jewish community members who felt it was important that Edmonton have a facility that caters to the needs of Jewish seniors.

It took several false starts before a site was secured, detailed drawings were developed and a $6 million grant was secured under the Affordable Supportive Living Initiative of the Alberta government at the time. Construction began in 2012 in a prime location on Jasper Avenue, at the corner of 119th Street, next door to Beth Shalom Synagogue.

The original name chosen was the Hebrew, Beit Horim, which means Our Parents’ Home. “Once we started building and dealing with contractors, banks, etc. … many of the non-Jewish professionals who we were working with had trouble with the pronunciation…. So, we dropped the Beit Horim and just became Our Parents’ Home,” said Jacobson.

While the residence caters to Jewish seniors wanting a place to live where they can keep kosher, the home does offer menu options for people of all religions and has a non-kosher kitchen as well.

At press time, there were 17 independent living suites available (one- and two-bedroom apartments), while the supportive-living space – the units overseen by Alberta Health Services – was running at full capacity.

“They have a two-year waiting list of people trying to get into the supportive-living space,” said Jacobson. “If someone needs to be in assisted living, wants to be at OPH and they are Jewish, we try to get them to the top of the list. But, we have no control over that, because it’s mandated and controlled by Alberta Health Services…. On the independent living side of things, people are self-sufficient. The rent includes 20 meals per month, so people have that option … while those living in supportive care are provided with all meals and snacks.”

The home’s 50 supportive-living units cover three floors, which are staffed by care personnel 24/7. The two memory care floors are secured, so residents cannot leave those levels unless accompanied by someone with a fob. A third floor is for residents in need of care but with no memory issues.

Since the facility is open to the general public, regardless of religion, there are varied faith-based offerings. While there is a rabbi-led Shabbat service offered on the third Friday of each month, there is also hymn singing once a month led by a non-Jewish chaplain and a variety of other programs.

“We had beautiful seder [last] year and several non-Jewish residents of our community came, because they were interested,” said Jacobson. “People can come to whatever program they wish.”

Jacobson, while not on staff at OPH, worked with the staff to ensure the place became all that it was intended to be by the other committee members.

“It was exciting to be on the committee designing the building, to sit with the architects and interior designers,” said Jacobson. “We chose designs and fabric for the furniture, picked colours and selected the china and silverware. It was a pleasure to facilitate meetings with such dedicated and enthusiastic board members.”

According to Jacobson, when you walk into the OPH building, “it’s like walking into a boutique hotel. It doesn’t look like an old folks’ building. We have modern art on all the walls and, from the common rooms on the 14th floor, one can enjoy panoramic views of downtown Edmonton and the beautiful river valley. You walk into the dining room and it’s like walking into a first-class restaurant … linens on the tables to complement the china – no paper napkins.

“Seniors come here to live, not to die,” she stressed. “During the summertime, we take people from the memory care floors to walk in the neighbourhood, through the green streets. There are many activities designed to physically, socially and intellectually stimulate our memory care residents.

“Our independent residents live the lives they’ve always lived – they go to the opera or ballet, the gym, to their friends and to family. If they need a ride, we have a car that will take them. They live independent lives and, as a plus, enjoy all the extra activities provided – the book club, bridge club, fitness room, movies, social programs, etc.

“The people who have been involved are to be commended for their vision and enthusiasm,” said Jacobson. “Special credit needs to go to Tulane Rollingher, who conceived the idea in the very beginning, way back in the 1990s, of having a Jewish home. She was the very first person to start getting this group together.” 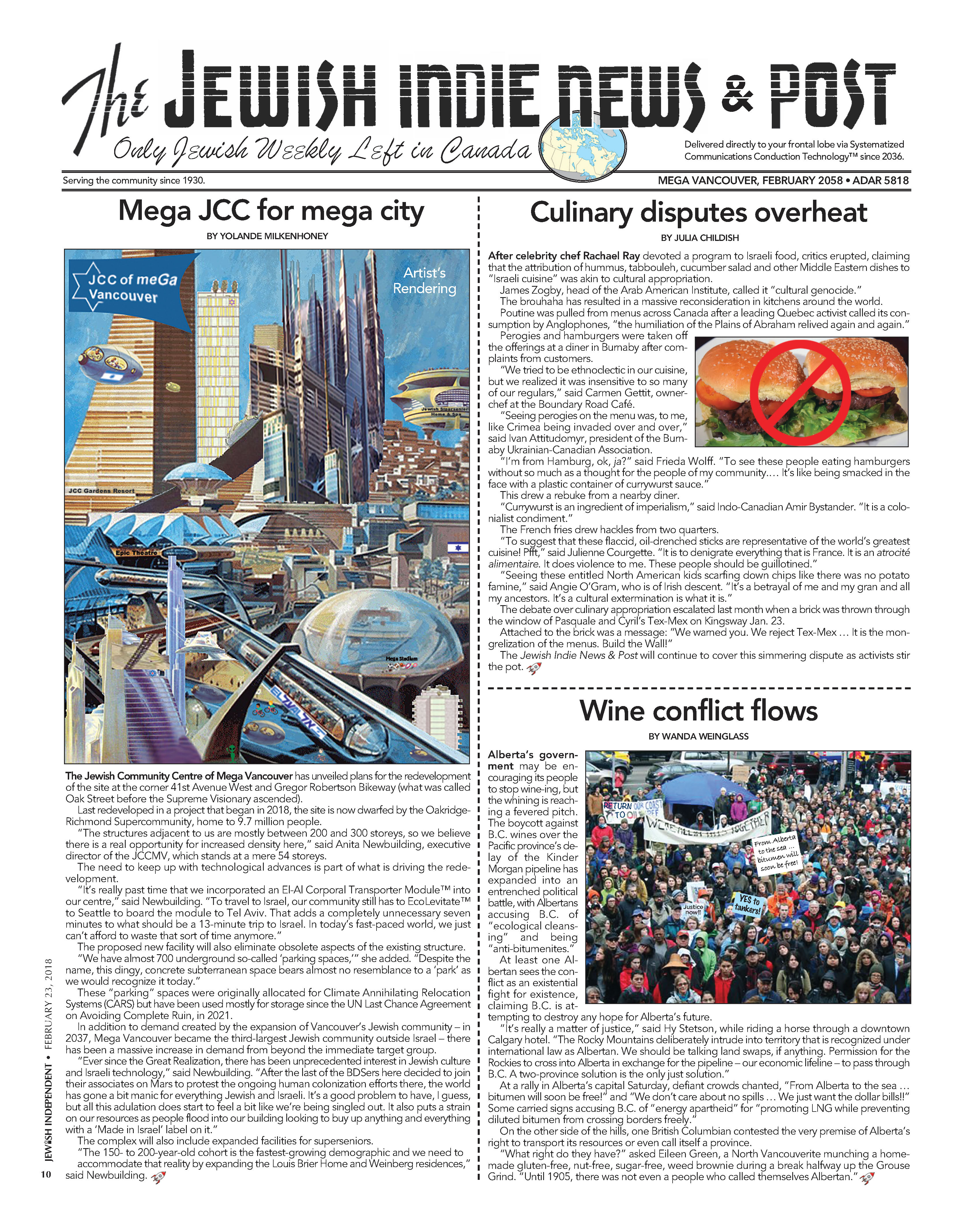