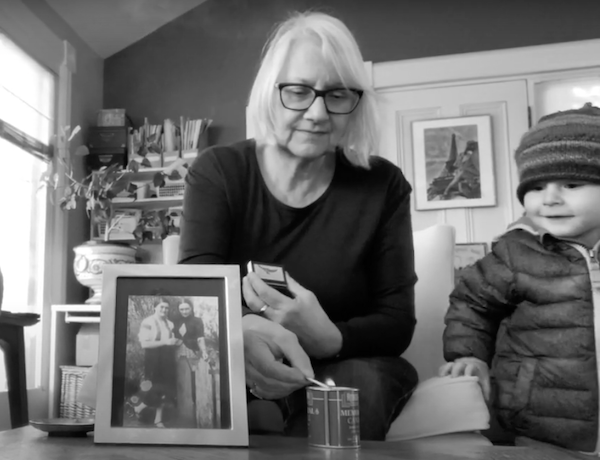 In a Kristallnacht commemoration no less poignant because it was held virtually, speakers emphasized the responsibility to remember.

“Why do we keep remembering?” asked Isa Milman, a Victoria writer and artist who is the daughter of Holocaust survivors. “Why does it matter? Isn’t it time to let go, to move on, to stop looking back and turn instead to the present and the future?

“We believe that the lessons of the Shoah, the Hebrew term for the Holocaust, are more important than ever,” she said. “We must speak out against injustice wherever we find it and as soon as we find it.”

Milman was speaking Nov. 9, the 83rd anniversary of Kristallnacht, at the commemoration organized by the Victoria Shoah Project. It was the second annual such event held virtually in the city of Victoria, because of the pandemic.

“Every day, I am filled with grief when I think of my murdered family, shot into pits,” said Milman, “and my 2-year-old cousin Mordecai, who was buried alive because a bullet would be wasted on him.”

As she leaned in to light a candle of remembrance for family members, Isaac Phelan, Milman’s grandson, six days shy of his second birthday, ambled to his grandmother’s side.

“But here I am appearing before you, throbbing with life despite everything,” said Milman. “Tonight, we are reminded of our moral imperative to remember, to speak out and join together in the strength of community to protect everyone from harm, wherever and however it arises. That is the lesson of the Shoah we must never forget.”

Rabbi Lynn Greenhough of Victoria’s Kolot Mayim Reform Temple spoke of the precedents that allowed an event like Kristallnacht to occur.

“Kristallnacht reminds us every year that those buildings, those synagogues, those shops that burned across Germany were what was seen above ground,” she said. “Underneath that same ground were seams of hatred and fear of ‘those people,’ those ‘not Christians,’ that existed and smouldered for centuries and for generations. Hitler was not an anomaly.

“Tonight, we remember,” she went on. “And, tomorrow, we continue to do the work of bringing greater peace and greater justice into this world. We stand for our place in this world as Jews, as Israel, to ensure those underground seams of hatred never burst through the ground again.”

Congregation Emanu-El’s Rabbi Harry Brechner said he misses the power of having religious, ethnic and communal leaders stand with him on the bimah on the anniversary of Kristallnacht, something that has not been possible since the beginning of the pandemic.

“Kristallnacht is really about the entire city coming together to say: not here. I think that we are in a time now where so many injustices of our past are coming up, not just in Kamloops but all around us…. And, really, for us to really talk about reconciliation, we do need to face really difficult truths,” said Brechner.

Highlighting the theme of this year’s commemoration – “Communities standing together” – Richard Kool spoke of an encounter, when he was a young adult, with a figure who may have been the Prophet Elijah. Kool lent the man a copy of The Atlantic magazine and, when the man returned it, it included a handwritten note with a surah (chapter) from the Koran, in Arabic, and, in Hebrew, the words of Leviticus 19:33-34, which is a directive about the treatment of sojourners in your midst, because “for sojourners were you in the land of Egypt.”

Dr. Kristin Semmens, an assistant teaching professor in the department of history at the University of Victoria, noted that it was her sixth year participating in the commemoration, but the first time she shared her personal motivations.

“The Nazis sent my maternal grandfather, a 17-year-old Ukrainian boy, to be a forced labourer on a farm in Austria during the war,” she said. “He never saw his family again. My maternal grandmother was an ethnic German growing up in the former Yugoslavia. She fled the advancing Red Army to end up on that same farm. She also never saw her village again.”

Semmens’ mother was born in 1949, in a refugee camp for displaced Germans.

“My family’s experiences were, of course, nothing like the suffering of the Jews of Europe during the Shoah,” she said. “I mention them now only to tell you why I became an historian. I wanted to know more about that time. And I did learn more. As an historian of Nazi Germany and the Holocaust, I know more than I ever wanted to about how awful human beings can be to one another. Every year, I stand before you and recount the events that are themselves horrific, but which only preceded far worse horrors to come. This year, given our world’s current challenges, I want to do something different. I want to highlight those who stood up to the Nazis at each stage, no matter in how small a way. I must stress at the outset they were exceedingly few. One of the most upsetting outcomes of my research is endless evidence about how ordinary Germans not only passively accepted but also often enthusiastically supported Hitler’s persecution of other Germans.”

In response to the 1935 Nuremberg Laws, there was precious little opposition. A rare exception, she said, was Carl Friedrich Goerdeler, the mayor of Leipzig, who expressed outright criticism of the laws. In 1944, he would be executed for his part in the plot to kill Hitler.

She also cited Otto Wels, chairman of the Social Democratic Party, who spoke out in parliament, but who soon had to flee the country as the Nazis cracked down on their opponents.

“The regime imposed a boycott on Jewish-owned stores, businesses and practices. Brown-shirted Stormtroopers and Hitler Youth stood outside, refusing customers entry. Many ordinary Germans obliged and even openly jeered the humiliated shop owners,” Semmens said. “Others, though, bypassed the … sentries and went shopping. They apologized to Jewish business owners. They brought flowers to their Jewish doctors to express compassion. That they rejected injustices directed at individual Jews was encouraging, yet it must be said that they almost never openly criticized the Third Reich’s newly realized systemic racism.”

While the murder of almost 100 Jews, the arrest of 30,000 more and the destruction of hundreds of synagogues and thousands of Jewish-owned businesses over that one night is widely known, she said, extensive damage to private residences is less well remembered. Semmens spoke of survivor testimonies of the night.

“They recalled spilled ink on paintings, rugs and tablecloths, and that blankets were cut with glass shards. Many dwellings were now uninhabitable,” she said. “Though such wanton damage and public violence upset many Germans, there were almost no cases of open opposition to Kristallnacht – but some defied the Nazis’ intentions in other ways. They denounced assailants, vandals and thieves to the police – not surprisingly, to no avail. Others assisted Jewish Germans directly by providing food, shelter and loans of household objects to replace those destroyed or stolen. They warned Jewish neighbours about impending arrests and even, albeit infrequently, hid them from the Gestapo. Some brave police officers and firefighters protected synagogues and doused their flames against the Nazis’ orders to refrain.”

Despite these anecdotes, important and uplifting as they may be, Semmens said, “Far, far too many merely stood by.”

She said, “It is easier to turn a deaf ear or a blind eye to discrimination and defamation – yet we must find courage to challenge the wrongs of our society.”