In her memoir My Fat Dad, New York Times wellness blogger and nutritionist Dawn Lerman (@dawnlerman) shares her food journey and that of her father, a copywriter from the Mad Men era of advertising. Lerman spent her childhood constantly hungry, as her father pursued endless fad diets from Atkins to Pritikin, and insisted the family do the same to help keep him on track. As a child, Lerman felt undernourished both physically and emotionally, except for one saving grace: the loving attention of her maternal grandmother, Beauty. Below is an adapted excerpt from My Fat Dad, in addition to a recipe for a healthier version of a Chanukah staple.

When I lived in Chicago, Jewish holidays were spent either at my Grandma Beauty’s house or my Bubbe Mary’s house. My grandmothers lived near each other on Chicago’s north side. I saw Beauty every weekend, but I would only see Bubbe Mary, my father’s mother, on occasional holidays. While my grandmothers had a lot in common – they were both amazing cooks – they were also very different. 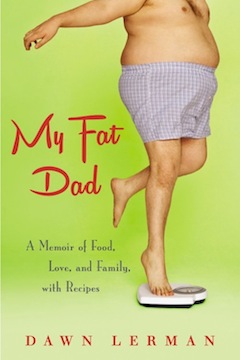 Beauty adored me, but Bubbe Mary did not seem to have much time to see me. Also, Beauty was all about being healthy, using a lot of fresh fruits and vegetables in all her dishes. Bubbe Mary was all about recreating the dishes that made her feel closer to Old World traditions she left behind in Romania.

Every year at Chanukah, the whole family was invited to Bubbe Mary’s for a traditional Jewish dinner. She even included my mom’s parents, Beauty and Papa. What I loved most about holiday gatherings at Bubbe Mary’s house was seeing my first cousins, whom I adored but rarely ever saw – and listening to both grandmothers speak Yiddish. I never knew what they were saying, but something about the sound of the dialect combined with intense hand gestures and the aromas of the Jewish food left a lasting imprint.

Bubbe Mary grew up in Romania and traveled by boat to the United States when she was 13. She traveled with some of her sisters and brothers, but many family members were left behind.

Bubbe Mary used schmaltz to cook everything – from matzah balls to latkes to chicken livers. Everything was fried with schmaltz, which she kept in a glass jar above her stove. For Chanukah, she often went through a whole jar. She fried and grated so many potatoes for the latkes that her knuckles would bleed. She made sure if you were eating at her home there was plenty of food, and you would not leave without a full belly and a doggy bag.

The most memorable Chanukah at Bubbe Mary’s was when I was 8, the last one before my family moved to New York, and one of the last times I ever saw her.