This story comes from the book Life Doesn’t Get Any Better Than This: The Holiness of Little Daily Dramas (Read the Spirit, 2015).

My father used to take showers with the lady next door.

It was all pretty kosher. We rented half of a “duplex” house at 89 University Avenue in Providence, and the Winn family occupied the other half. “Duplex” means different things in various places; in Providence, a “duplex” was a house with two separate entrances and two mirror-image units. Ours had three floors and a basement suitable for Cub Scout den meetings. 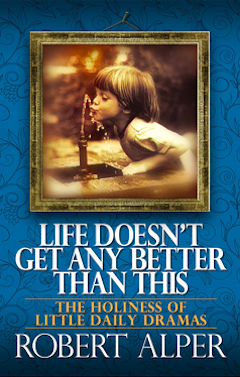 The way the house was designed, the bathrooms on the second floor shared a common wall, tub alongside tub and toilets back to back. The insulation was fairly thick, but subdued sounds could get through, and soon after the Winn family moved into 91 University Avenue, my father and Ruth Winn discovered that they observed similar morning shower routines. The muffled knocking back and forth on the tiles at 7:15 a.m., then a cute neighborhood joke, is now a piece of family folklore.

My mother and Ruth became friends immediately; 40 years later and 400 miles apart, they still dearly love each another. Laughter is what started it all off, but it was a hurricane called Carol that really brought us all together.

For eight days, Providence was without electricity, and neighbors drew closer to one another. Cold food went into the Keoughs’ old gas refrigerator at 85 University Avenue, while our battery-operated radio was the source for news and entertainment. The Winns’ vast quantities of sporting equipment helped everyone pass the time until that late afternoon when we were sitting on our porches and my mother suddenly yelled, “The lights are on!” Everyone rushed inside.

The Winns’ oldest son Cooper David Winn IV and I were classmates, though never best friends. Still, we spent lots of time together, as neighboring kids do, and some of the most memorable moments occurred around the December holidays. Chanukah at my house. Christmas at his house.

For me, Chanukah generally meant one gift from my parents per night, but factoring in additions from grandparents, other relatives and friends, I averaged 16 to 20 each season. Not bad. I would even feel a bit on the smug side as I walked to school in the morning reporting to Cooper on the prior night’s take.

That is, I felt smug until early Christmas morning, when I would race over to the Winns’ side of the house to inspect the mountains of presents, the massive quantities strewn about the living room, such a volume of stuff that even the recognition in later years that the haul included a suspiciously large amount of underwear and socks could not make me rationalize away my jealousy.

The feeling of Chanukah has remained with me: our old tin menorah and the look, the smell, the soft, smooth texture of its candles, sometimes dripping their orange wax across my fingers. There were the traditional songs, the latkes and applesauce, and our one decoration, “Happy Chanukah,” printed on colorful paper dreidels and placed across the dining room entryway. The sign was worn, faded, but it was our tradition, and for eight days it transformed the room into a chamber of happy expectation.

Most of my presents were modest. I loved to make Revell models of antique cars, and so something like a Stanley Steamer one night might be followed by a Stutz Bearcat the next. Another year it was accessories for my small American Flyer train set: one night it might be a new caboose, and another night a little building to place near the tracks. I remember categories of gifts, but the particulars have long faded.

Except for two presents that I’ve never forgotten.

The first was a 26-inch English bicycle. It arrived on the year when I went for the gold in the “eight small presents or one big present” option game. Friday was the designated night and, as soon as the candles were lighted and the songs sung, I dutifully complied with the “Close your eyes tight” directive. The waiting seemed to go on forever as I listened to my father’s grunts and a bumping noise coming up the cellar steps. When he approached the dining room, I heard the rhythmic, metallic sound of a spinning tire, and knew that my yearlong series of unsubtle hints had been acknowledged.

Later we went to synagogue and, before the service began, I stood in the foyer for what seemed like hours, watching as every person entered, brushing the snow off their coats and stomping their boots. I scanned the arrivals, looking for Joey or Sammy or Ricky or anyone else I knew. “Guess what! I got an English bike!”

Other Chanukahs, though, were not as festive. My parents constantly struggled financially, one of the consequences of my father’s checkered career and made worse, later, by the albatross of medical bills from my sister’s long illness.

My father was always involved in the paper business. During the eight years when we lived on University Avenue, he worked for at least six different companies in waste paper, paper chemicals and wholesale tissue. Each position would begin with optimism and end with him returning home one night carrying his electric typewriter.

He always bounced back, always landed another job somewhere, somehow. Yet the process was draining, and the weeks or months between paychecks grim. One of those dark periods coincided with Chanukah.

I knew things were tough that season. We didn’t starve, but everything had to be cut back as we tried to make do on the salary my mother earned fitting women into corsets at the Peerless Department Store. “I know it’s hard,” she would say, “but some day our ship will come in.” I believed her. Sometimes I could even visualize “our ship,” a small speck on the horizon slowly, surely heading right for us.

“Our ship,” burdened with riches, was still far out to sea when Chanukah began. This year, I knew, would not be like other years. The grandparents and a few of my parents’ friends came through, but, my parents explained, I would need to understand that they just couldn’t afford presents this time. Just this year. Next year will be better.

Chanukah overlapped Christmas, fortuitously. The Winns were busy with their preparations, so I didn’t see much of Cooper. I was glad school was already on vacation; there was no need to report to friends on my Jewish version of an empty stocking.

That Christmas morning I didn’t rush next door.

On the final night of Chanukah, my parents surprised me with a gift. It was a small one, they warned. Nothing very special. But I’d been so understanding of what was happening that they wanted me to have it. I felt a slight twinge of guilt over their sacrifice as I accepted the little package.

Inside the box was a plastic model for my collection, a replica of a Chris Craft cabin cruiser. Probably cost about $2.95. I glued it together the next day and, for years, until I went off to college, the little boat sat on a shelf in my bedroom. It was far from being my fanciest model. Long discarded, the thought of it means more to me now than it ever did back then.

When I look back on all those Decembers of my childhood, those often wonderful days of mystery, anticipation, celebration, I know for a fact that I received many dozens of presents over the course of the years. They form an indistinct blur. After all, a long time has passed.

In truth, of all those gifts, I can actually remember only two. Only two. One was 26-inch English bicycle. Shiny black, three-speed, with a headlight powered by a generator that spun alongside the tire and its own silver air pump latched to the frame.

The other was a plastic model boat.