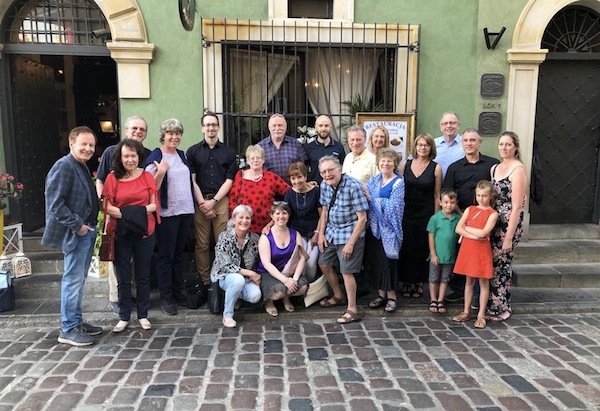 Like scores of other British Columbians, George Heyman owes his life to Chiune Sugihara.

Heyman, who was reelected Saturday as MLA for Vancouver-Fairview, was born after the Second World War. But his parents escaped Poland via Japan thanks to the assistance of Sugihara, who was the vice-consul for the Japanese Empire in Kaunas, Lithuania. At risk to his career and probably his life, Sugihara betrayed orders of the Imperial Japanese government and issued transit visas that are credited with saving the lives of at least 6,000 European Jews.

Heyman, who was minister of environment and climate change strategy in the last government, was sketchy on some of this family history. So, at the urging of a distant cousin who is “a ferocious researcher,” Heyman, his sister and other family members from around the world convened in Poland last year.

“[The cousin] found others as well and he started communicating with us and sending us snapshots of things that he’d found in archives and going back a couple of hundred years,” Heyman said of the cousin, who is a retired professor in Denmark. “He found information about the village that our ancestors had once lived before they migrated to Warsaw.”

The diverse group of family members spent about 10 days together in the summer of 2019.

“We met in Warsaw, we had an initial family dinner of 20 people, three generations,” he recalled. “Everybody said a little bit about what it meant to them to be back, as well as where their lives had taken them.”

The cousin had prepared a family tree and presented each guest with a scroll outlining their genealogy. They then traveled as a group to Praszka, the village where the family had originated but left for Warsaw, probably in the late 1700s or early 1800s.

Both of his parents, Stefan Heyman and Marta Eliasberg Heyman, were born in Warsaw and they were family friends with the noted pedagogue and child advocate Dr. Janusz Korczak.

“My grandmother had been a volunteer working with him and my grandfather, who was a doctor, had also worked with him,” said Heyman. “We visited the site of the orphanage, which is now a commemorative museum. We went to the Jewish cemetery in Warsaw.… I was so pleased to see that so much had been done to rehabilitate much of the cemetery. People had been working on it since the end of the Second World War, but work continues. We wandered, we found gravestones of relatives and people we thought might be relatives. We talked to people we met there.”

They also visited the remnants of the Warsaw Ghetto, where Heyman’s maternal grandmother had been confined but from which she was rescued before the ghetto was liquidated, in 1943.

His maternal grandfather had died before the war and his grandmother, Stella Bernstein Eliasberg, had remained behind when Heyman’s parents fled. She was incarcerated in the ghetto, but was rescued in a scenario of which Heyman knows only the barest details. The ghetto wall abutted the side of a church and someone – friends of his grandparents, he thinks – brought clothing as a disguise and smuggled her out through the church and into hiding for the rest of the war. Heyman does not know whether there was any communication during this time between his mother and his grandmother. But, shortly after the war, Heyman’s parents were able to bring his grandmother to Vancouver, where she lived with them and played an important role in his life, until she passed away just before Heyman’s bar mitzvah.

Nothing is known of the fate of Heyman’s paternal grandparents.

“I often wonder what it must have been like for my father,” he said. “It’s hard enough when we remember a loved one who has died and we know the circumstances of their death. It’s horrific, as it has been for so many, many, many people … they are left only to imagine what their loved ones went through in their final days and hours. That was my father.”

The trip refashioned Heyman’s conception of his family.

“I always thought of my family as being very small,” he said. “In fairness, I didn’t know that some of these people even existed…. It gives me a sense of continuity and history.”

The trip also helped emphasize for him the lessons of the past for the politics of the present.

“We see right-wing violence, we see the beginnings of fascism appearing in many countries,” he said. “We don’t have to look far to see what happens if we take things for granted.”

He brings that experience back into his current work.

“That’s one of the reasons that our government, after 16 years of its elimination, reinstated the B.C. Human Rights Commission,” he said, “because it’s not enough to just deal with racist behaviour, hate behaviour, after it happens, we need a commission that will be responsible for educating people and recommending programs to raise people in an atmosphere of tolerance and love, not suspicion and hate. So that is also a very significant and often unnoticed achievement of our government, and we did it very early.”

He reflected: “The trip was meeting a family that I never knew I had and having more of a sense of being grounded in my family history, as well as the terrible recent history of what happened to our and so many other families, just dispersed, another diaspora all over the world.”