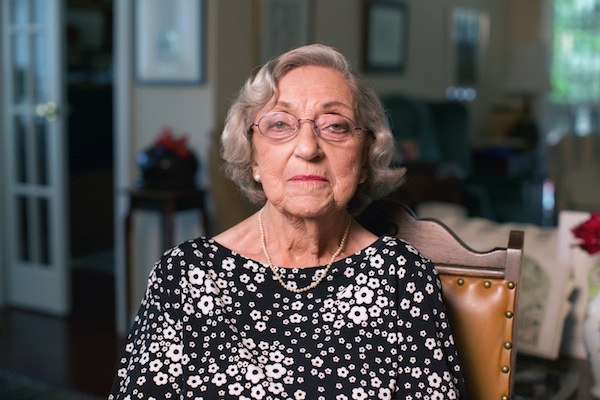 Judy Weissenberg Cohen, at the age of 92, recently published her memoir, Cry in Unison. (photo from Riddle Films)

On erev Yom Kippur, in a Nazi concentration camp, a group of Hungarian Jewish women and girls prevailed upon two comparatively sympathetic kapos to obtain a lone candle and a single siddur.

Judy Weissenberg Cohen, a Toronto woman who, at the age of 92, recently published her memoir, was one of those girls.

“In this place, where we felt that instead of asking for forgiveness from God, God should be asking for forgiveness from us, we all wanted to gather around the woman with the lit candle and siddur,” she said during a virtual book launch Sept. 14. “She began to recite the Kol Nidre very slowly so we could repeat the words if we wanted to, but we didn’t. Instead, all the women burst out in a cry in unison. Our prayer was the sound of this incredible cry of hundreds of women. I have never heard, before or since then, such a heart-rending sound. Something was happening to us. It was as if our hearts were bursting. Even though no one really believed the prayer would change our situation, that God would suddenly intervene – we weren’t that naïve – the opportunity to cry out and remember together reminded us of our former lives, alleviating utter misery even for the shortest while. In some inexplicable way, it seemed to give us comfort. Even today, many decades later, every time I go to Kol Nidre services, I can’t shake the memory of that sound. This is the Kol Nidre I always remember.”

Cohen’s book, Cry in Unison, was published by the Azrieli Foundation’s Holocaust Survivor Memoirs Program. Cohen’s is the 113th memoir published by the program. The books are offered to schools and universities across Canada at no cost, providing educators with an accessible entryway to teaching about the Holocaust by approaching history one story at a time.

Cohen was born in 1928, the youngest of seven children in the Weissenberg family.

In 1938, when she was 10 years old, her parents and other Hungarian Jews became increasingly alarmed by news from adjacent countries, including the Anschluss of Austria, followed a few months later by Kristallnacht.

When the mass transport of Jews from Hungary began, in 1944, Cohen spent days in a boxcar with 78 others, with two buckets – one for drinking water, the other for a toilet. On arrival in Auschwitz-Birkenau, as they disembarked from the cattle cars, a worker approached women with children and “very quietly in an urgent tone” told the young mothers to hand their children over to the grandmothers.

“At the time, we didn’t know what it meant,” Cohen recalled. “The fact was [the worker] asked the young mothers to give children over to the grandmothers because he knew that, within hours of our arrival, the grandmothers who looked 45 years or older and Jewish children 14 and younger immediately will be murdered in the gas chambers of Birkenau. He wanted to save the young mothers. If you didn’t carry a child, then you lived. If you carried a child, even if the child wasn’t yours, you went to the gas chamber with the child.”

Cohen and her sisters were showered, shaved and given dirty hand-me-down garments. Sent outside without towels to dry themselves, Cohen could not locate her sisters.

“Only when they started to talk … and all of a sudden we started to laugh in our painful way,” she recalled. “How drastically we changed within a few hours.”

Cohen was subsequently transported to Bergen-Belsen concentration camp and then to a forced labour facility that was a sub-camp of Buchenwald.

In the spring of 1945, on a death march through the German countryside, she was finally liberated. The realization came in a German man’s choice of language.

With other girls and women, Cohen was sleeping in a barn during the march. “In the morning, there was a loud knock on the barn door,” she said. “We woke up all of a sudden from our shallow sleep and there stood a guy in the doorway. I still remember, it was a beautiful sunny day, the sun was behind him and he stood there like a dark silhouette. And, in a nice, strong voice in German, he said, ‘Fräuleins!’”

The women were startled as much by the word as by the awakening.

“Did he really say Fräuleins? A German addressed us as Fräuleins?” they asked one another, “The war must be over. A German hasn’t addressed us in a civil tongue for ages.”

He immediately continued: “Fräuleins, you are free.”

The terms liberation and freedom may be equivocal given what Holocaust survivors experienced. In Cohen’s case, she returned to her hometown in Hungary, certain that if she, the youngest, had survived, then surely her elders, who were more capable of caring for themselves, would likewise be coming home.

“I don’t know why I dared to be logical about the Nazi genocide,” she said.

Instead, she was reunited with one brother, one sister and two cousins.

“So it was very traumatic,” she said. The trauma was accentuated by the fact that some of the returning villagers had been on work battalions and had not experienced the death camps, and in fact had no knowledge of them.

“I had to be the messenger to tell them that their wives and their little girls were murdered in the gas chambers in Birkenau,” she said. “They didn’t believe me. They actually [considered] me insane.”

She went to a displaced persons camp – constructed on the grounds of the razed Bergen-Belsen concentration camp – and lived there for two years, learning a trade. But, when the opportunity came to emigrate, it wasn’t as a dental technician that she was chosen.

The Canadian government was seeking 2,500 garment workers. Though she had no experience, Cohen faked it and came to Montreal ostensibly as seamstress. (She moved with her family to Toronto in 1961.)

“But, with all other difficulties that we overcame through the time, I finally learned, with kind helping people, how to put together a dress and made some kind of a living,” she said. “The contract was only for one year, but I stayed for three years.… During those three years, I also prepared myself to change skills, change profession. I learned French, I learned English, I took a course to become a bookkeeper with typing ability and switch to office work.”

There was no psychological support and the term post-traumatic stress disorder did not yet exist.

“I don’t think we realized that we were traumatized,” she said. “You went through difficult times but it didn’t have a name. It so happened that my sister and I, and my brother, we had self-help among ourselves…. The emotional baggage, as far as I’m concerned, and I can only speak for myself, that had to be put on the back burner. It no longer was a priority to talk about it. Furthermore, nobody wanted to listen to us…. We just went on living as new Canadians and establishing new lives basically on the ashes of the old, and even became happy Canadians, got married, had children. We became like all other Canadians, overcoming all emotional difficulties by not giving them eminence in our lives.”

Cohen became a public speaker, sharing her Holocaust experiences with schools and other audiences after she had a run-in with neo-Nazis in downtown Toronto. She also has become a researcher and author on the topic of the unique experiences of women in the Holocaust.

Above all, Cohen said, she wrote her memoir in the 10th decade of her life as a warning.

“Mainly, I would like you to understand that this generation and subsequent generations must learn from us while we are still alive that this kind of depravity, one human to another, was possible and did happen and, unfortunately, it could happen again,” she said. “We are writing it to you all as a warning, as a very serious warning of what can happen even in cultured, educated, civil societies.”