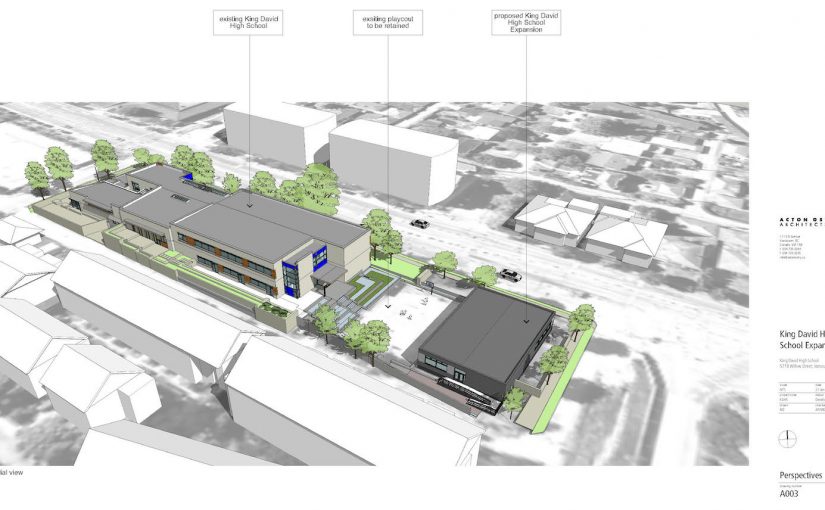 King David High School is slated for a whole new home in the redeveloped Jewish Community Centre of Greater Vancouver campus. However, that move could be eight, 10 or even a dozen years away. In the meantime, the continually growing student body needs more space – and that is why a new component is now being added, with intended completion this coming September.

Russ Klein, King David’s head of school, said the existing building, which opened in 2005, is at near-total capacity.

This means that the school cannot increase course offerings, such as new Judaic studies programs or electives. The trend in secondary education is to offer a diversity of options to encourage students to explore their interests and passions. In addition, education is increasingly moving away from large group class lessons toward collaborations between pairs or small groups of students. That demands a greater number of more flexible spaces.

The new structure is a “modular unit addition,” Klein said, rejecting the term “portables.” The difference, he said, is that portables were inflexible, prefabricated buildings, while the new modular options can be adapted to whatever configuration an institution requires.

In King David’s case, it is expected to feature four classrooms, a small teachers’ work room, student changing rooms and a physical education office. In all, it will add about 3,500 square feet of space to the 40,000-square-foot school. The new building will be located at the east end of the property, adjacent the new Oakridge redevelopment, where a grassy hill now exists. Although this will result in a loss of that outdoor area, Klein said the hill is a nice place for kids to hang out in September and for a couple of months in the spring, but, for most of the year, it is not really usable space.

In addition to the changing expectations driven by educational trends, the school has been on a steady trajectory of growth. Enrolment is now at 240, up from 139 students 11 years ago.

The modular nature of the new facility slashes the time from conception to completion. It will take two or three months to prepare the site and another five or six months to construct the building. Acton Ostry, an architecture firm that has done many developments in the Jewish community, including KDHS, is leading the project.

While Klein acknowledges that the new building is a “stopgap” intended to allow the school to function adequately as they await the development of its new home in the JCC complex across the street, he adds that this is no chump-change endeavour.

“It’s an almost $3 million project,” he said. The funding is coming from the Diamond Foundation.

“I always think everybody should just recognize how generous the Diamonds are in everything they’re doing,” said Klein.

Examples of some of the new initiatives the space might accommodate are an expanded robotics program, as well as applied design and coding courses. Rabbi Stephen Berger, King David’s head of Judaic studies, would like to see more text-based education, where students can engage in chavruta-style learning, traditional, intense small group talmudic study, said Klein.

Comparative religions and other courses geared toward social action initiatives that inspire many students are other things Klein can envision growing thanks to the new space.

All of this is taking place as the JCC, in partnership with the Jewish Federation of Greater Vancouver and their constituent partners, proceed full-steam-ahead on the biggest capital project ever undertaken by British Columbia’s Jewish community. The two-phase redevelopment will see a 200,000-square-foot, state-of-the-art, multigenerational community centre constructed where the existing JCC parking lot is located. This will include expanded childcare, seniors’ services, arts and cultural spaces and amenities for all Vancouver residents, as well as becoming the home for more than 15 not-for-profit organizations, including a theatre and more space for the Vancouver Holocaust Education Centre.

Once that is completed, a second phase will commence on the site of the existing JCC building. This will include mixed-use rental housing, with units expected to be offered at or below market value and open to everyone. Beneath these residential floors, at street level, will be a “podium,” where the high school will be located.

Plans foresee a 60,000-square-foot school, which is a 25 to 30% increase over the existing structure – but Klein stresses those numbers don’t tell the entire story.

“The JCC is going to be built with two gymnasiums,” he said. “One of them will be dedicated to King David’s use, so we can use it whenever we want to, and then the JCC will be able to use it when we are not using it.” This is a reversal, of sorts, from the existing situation, where the high school can use the JCC’s gym when it is not otherwise occupied.

“That probably is as exciting to us as the extra learning spaces,” said Klein. “The other lovely thing for us is there going to be a small field, which is [currently] a real problem for King David.”

The field will be constructed behind the building, where the property juts out with an asymmetrical wedge at its southwest corner. The field will not be legal size, and so will not be suitable for competitive games, but will allow the school to hold practices at any time, unlike at present, where they have to rent fields, which are expensive and much in demand.

The redevelopment project has received $25 million commitments from each of the federal and British Columbia governments but a massive fundraising campaign is required to complete the project. When the school will be able to move into its new digs depends on a large number of variables.

“I’d say, best case scenario in my mind – and everyone will give you a different case – I think the best case is eight years,” said Klein. “Probably 10 to 12 is more realistic.”