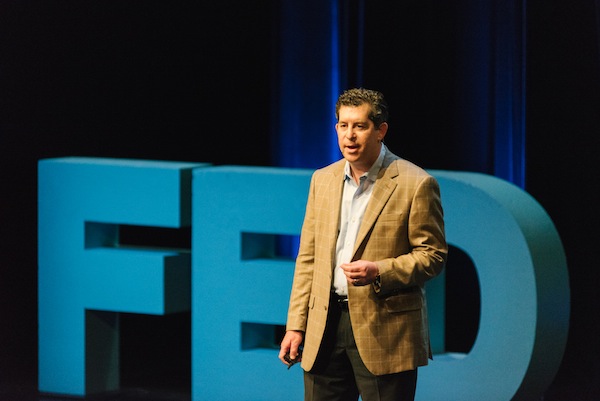 Houston Rabbi Brian Strauss lost both his family home and his synagogue to Hurricane Harvey, but the story he brought to FEDtalks Sept. 9 was an uplifting one. (photo from JFGV)

A time-lapse video showed the unrelenting advance of Hurricane Harvey. The security camera at Houston’s Jewish community centre captured the natural disaster’s impact on the building’s interior from the moment the first drops of water came through the front door until the deluge reached the ceiling. Furniture became unmoored and began to swirl around the building’s lobby.

The Category 4 hurricane made landfall in August 2017, slamming Texas and Louisiana with catastrophic flooding and dozens of fatalities. Material damages were estimated at $125 billion US, mostly in Houston and southeast Texas.

The Jewish community of Texas had to rebuild. Synagogues, the JCC, the Jewish seniors home and one in every 13 Jewish family homes were ruined.

Rabbi Brian Strauss, who spoke in Vancouver Sept. 9, lost both his family home and his synagogue. The issue was not merely flooding. Any flooding damages property, but the area’s topography meant that Houston was submerged in toxic bayou water, rendering everything it touched toxic. Added to this, the humidity of Houston caused mold to grow immediately. Houston received 52 inches of rain in three days – equivalent to its average annual rainfall. (By contrast, he noted, Vancouver gets 46 inches of rain annually.)

But the story Strauss brought to the Vancouver Playhouse – he was one of four speakers at FEDtalks, the opening event of the Jewish Federation of Greater Vancouver’s annual campaign – was an uplifting one.

Volunteers from around the world descended on Houston. The federal government provided resources to rebuild synagogues, homes and communal facilities. Especially notable: Israel donated $1 million to a Diaspora community struggling with crisis. Strauss juxtaposed the phenomenon of Jewish giving, which for decades flowed from the Diaspora to Israel, with the reality that Israel is now in a position to help a community in crisis abroad.

Also speaking at the campaign launch event was Risa Alyson Cooper, executive director of Shoresh. She shared her journey into Jewish spiritual and ethical issues around food. Shoresh is an Ontario-based organization that “inspires and empowers our community to take care of the earth by connecting people, land and Jewish tradition.”

“Eating is an ethical act,” Cooper said. By engaging community members “from seed to harvest,” the organization reduces the stigma of receiving “donated” foods.

“It’s not a handout,” she said. People are involved in creating their own food sustainability.

Cooper’s journey of exploration began during a trip in Nelson, B.C., a story she shared in an article the Independent ran in advance of the event. (See jewishindependent.ca/b-c-inspires-activists-work.)

Also at FEDtalks, Isaac “Bougie” Herzog – who chose to sit out not one but two Israeli elections this year – spoke about his role as head of the Jewish Agency for Israel.

Herzog is Israel’s former leader of the opposition and former head of the Labour party. In contextualizing his role as chairperson of the world’s largest Jewish organization, an agency that has been central in creating and building the Jewish state, he spoke of continuing a family legacy.

His grandfather, Rabbi Yitzhak HaLevi Herzog, who was the first Ashkenazi chief rabbi of Israel, went on a rescue mission in 1946 to find hidden Jewish children in churches and monasteries throughout Europe, bringing thousands of them to Palestine. Herzog’s father, Chaim, who went on to become president of Israel, served with the U.K. army, landed in Normandy, fought in the Battle of the Rhine and was among the first to enter the Bergen-Belsen concentration camp. Abba Eban, the legendary Israeli diplomat and statesman, was an uncle.

“I’m fulfilling the orders of my forbearers,” said Herzog, who was introduced by Karen James, immediate past board chair of the Jewish Federation and a member of the board of the Jewish Agency. The Independent also interviewed Herzog in advance of his visit. (Read the story at jewishindependent.ca/building-jewish-future.)

The most emotional presentation of the night came last. Dr. Gillian Presner recounted how she was invited to join the Federation movement’s National Young Leadership Cabinet. When she was told the commitment was five years, she replied: “That’s the rest of my life.”

Presner was diagnosed with a brain tumour in 2016, while pregnant with her third daughter. Nine days after the baby was born, she suffered a stroke.

Despite the challenges of raising a very young family while enduring terminal brain cancer, she accepted the invitation to join the cabinet because, she said, “I refuse to die before I’m dead.”

She understands that she needs to leave a legacy of vibrant memories to her daughters – the family took a trip to Israel together, certain it would be her only chance – but she also knows that her daughters will “have to learn about me by hearing about what Mommy did.”

By continuing to devote herself to philanthropic causes, she is “showing my daughters what I truly value.”

Ezra Shanken, chief executive officer of the Jewish Federation, closed the evening, noting “our most precious commodity we have here is our time.”

Alex Cristall, chair of the board of Federation, welcomed the audience, acknowledging in particular 150 people in their 20s and 30s whose presence was made possible through a contribution by Jonathon and Karly Leipsic. Jonathon Leipsic is the annual campaign chair for the second consecutive year.

“It is a pleasure to have you,” Cristall said. “We need you.”

Jonathon Leipsic spoke of Theodor Herzl’s dream of Jewish self-determination and noted: “Our generation has never known a generation without emancipated Jewish freedom.”

He urged the audience to go to YouTube and find Chaim Herzog’s speech to the United Nations in 1975 against the motion that equated Zionism with racism.

“It will send shivers down your spine,” he said.

O Canada and Hatikvah were sung by the King David High School Choir.

To donate to the campaign and watch videos of all the FEDtalks speakers, visit jewishvancouver.com.