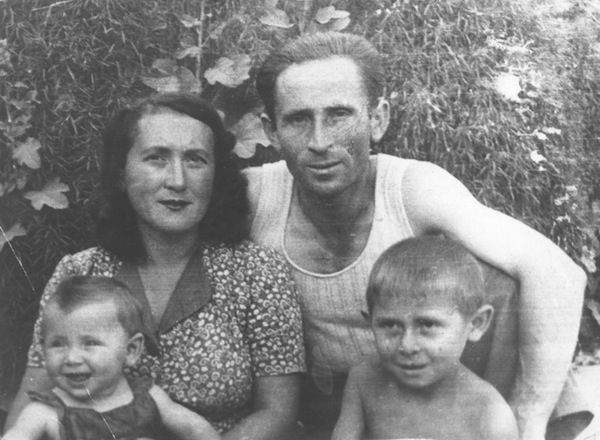 The author as an infant with her parents Sarah and Mechel, and brother Hy, in Kazakhstan, where she was born in 1944. (photo from Reva Kanner Dexter)

A year ago, I attended the 31st Annual World Federation of Jewish Child Survivors of the Holocaust and Descendants, hosted by our own Vancouver Holocaust Education Centre. I have kept the story of my own Holocaust experience suppressed because it never seemed as tragic nor as diabolical as others’. Furthermore, because I was an infant, born in 1944, I did not think that I had the right to call myself a child survivor. However, attending the conference changed that perception.

I claim the dubious distinction of being in the one percent of children born of Polish parents who survived. As three million Jews of Poland were murdered, I feel very privileged.

Of course, the circumstance of my miraculous survival is due to several factors. First, my parents escaped Poland in September of 1939. Second, they were living close to the Ukraine border. Third, they had the essential skills and resilience to overcome many hardships.

My mother Sarah (daughter of Pinchus and Chana) and my father Mechel (son of Israel and Esther) were born and grew up in small towns in southeastern Poland. Krasnystaw and Izbica were 12 kilometres apart. Close enough for biking and walking between the two towns along the Wieprz River.

Typical of small towns in that region and era, Sarah and Mechel grew up poor. Sarah’s father was a barber, who taught her his skills as soon as she could hold a razor blade. Mechel’s father was a tailor who had taught him the art of sewing, also at a young age.

Sarah and my father had moved to Chelm after their marriage, and Sarah was already six months pregnant when the German troops invaded.

Mechel was a member of a Zionist/socialist club, so he got the news early that the Nazis had taken over the town – 1,500 young men were rounded up and shot. Rumours of castration created panic. Mechel took off by bike with some of his pals, telling Sarah he would be returning.

Sarah’s birth mother lived in Rovno, Ukraine, so she made her way alone across the border with the help of a Yiddish-speaking Russian soldier. She had the prescience to bring her barbering tools. Little did she know that trains and train stations were going to dominate her life from that night forward for the next six years.

Sarah and Mechel gave birth to their first child, Chaim (Hy), who an aunt testified was born in Rovno, while an immigration document states that he was born in Novosibirsk, Siberia. Memories do seem to play tricks when the brain is violently assaulted.

The Russians saw and seized the opportunity of so many Jews fleeing Poland into Ukraine. They tricked Jews by telling them that eastern Poland was now under Soviet rule and that they would be given safe passage back home.

It was a lie, a big one. The Jews were shoved into open cattle cars and sent to forced labour camps all over the U.S.S.R. Workers were required to keep the country running under the murderous hand of Stalin.

My parents and baby brother survived the train ride from Rovno or Kiev, which finally stopped in a logging camp on the banks of the Ob River, in Siberia. They realized immediately that their lives were only worth what their labours could produce.

I recall stories of wolves howling in the night and rats “as big as kittens” stealing their meagre rations while they slaved in the tundra in the day and tried to sleep in the frozen barracks in the night.

My father organized a strike – after all, they were in a communist country weren’t they? The demands for better working conditions were answered rapidly by rounding up the leaders during the night and incarcerating them in the Gulag.

Sarah had to fend for herself again. Even though she was freezing, undernourished and exhausted, she had an ample amount of milk flowing from her body. This was noticed by the commandant, whose wife had just given birth and could not nurse their sickly baby. Sarah was promoted from lumberjack to nursemaid.

As the two women became friends, Sarah got news that Mechel and the other men were still alive.

In June 1941, when the Nazis attacked Russia, the Soviets granted amnesty to the surviving Polish citizens. Poland and Russia became allies. The Jewish prisoners were released, only into a more dangerous predicament.

With Mechel’s leadership, the ragtag group of Jewish lumberjacks built rafts, trusting the river to lead them to safety. They navigated the Ob River by day, roping up by night.

During the night, the women would scramble up the banks, scavenging for food on adjacent farms. My mother told us that she dodged many bullets through the darkness. But the plan succeeded in getting them to a train station.

The next few years, they were underground, following trains, bartering at train stations, trying to regain health. Sarah would do pop-up barbering, thankful for her tools and endurance.

They finally made it to Czymkient, Kazakhstan, where Mechel got a job sewing uniforms for pilots at a pilot training academy. I was born in December 1944. Hope and optimism returned to our little family.

Of course, the story does not end here. Other chapters will emerge, as I continue to pull pieces of the survival puzzle together.

Thanks to the conference, I realize how important it is to keep searching for objects and recording memories, which return our beloved victims and survivors to us in spirit.

Reva (Rivka) Kanner Dexter has been a docent at the Vancouver Holocaust Education Centre since 2007.