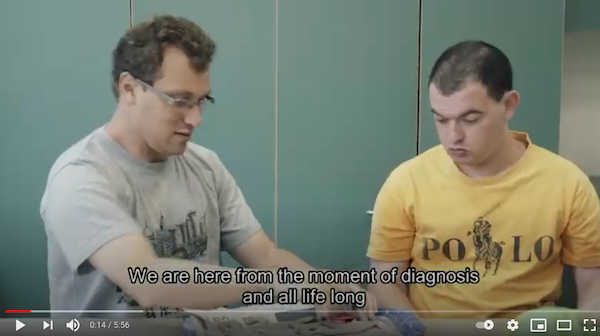 For this year’s Negev campaign, JNF Pacific Region has partnered with ALUT, the Israeli Society for Autistic Children, to renovate Aviv House, one of the first lifetime living facilities established by ALUT. ALUT has built and operates 18 “Homes for Life” in Israel, residences for individuals with autism who require supported living, that allow the residents to become integrated into the community to the greatest degree possible and provide for lifetime care in a family-type setting.

Aviv House (Beit Aviv) was established in 1992 in Jerusalem and the 14 residents have been living there since its inception. Their ages currently range from 35 to 49, and they all require assistance in almost all aspects of everyday life.

The physical house, now well over half-a-century old, is showing its age and has reached the point of risk. For example, the walls are crumbling and the sewage lines are regularly clogged; the building is not wheelchair accessible.

For more information and to watch a video from the campaign’s honorary co-chairs, Penny Sprackman and David Goldman, visit facebook.com/jnfvancouver. You can also contact the JNF office at 604-257-5155 or [email protected].

Isaac Messinger being presented with a certificate of appreciation last year for his contributions to the Jewish National Fund of Canada and Beit Halochem. (photo from JNF Pacific Region)

Isaac Messinger was born in Poland in 1929 and spent some of his early years in Siberia. Although his family tried to flee back to Poland when he was 12 years old, he ended up alone and orphaned in Russia and has spent the years since then living a very colourful life.

Among the notable moments, Messinger worked as a cowboy on horseback, chauffeur to a Polish officer, in a garage, as a prizefighter, a soccer player, a tinsmith and a traveling carnie with a roulette wheel. And he still had time to open a steakhouse and deal in diamonds, while lending money to some of the original landowners along the Las Vegas Strip.

Messinger has long been a strong supporter of Israel and he is currently focused on funding a project of JNF Canada that works with Israeli veterans, a special fitness centre at Beit Halochem Ashdod.

At first glance, the fitness centre at Beit Halochem looks like any other fitness club. There are lots of people working out on the equipment, weight training and stretching. Upon closer examination though, the difference is quite clear. Not only is much of the equipment and machinery slightly different, but the members are as well. Here, veterans young and old, with a wide spectrum of disabilities, come to improve their strength, flexibility and cardiovascular health. They exercise side by side, some on special equipment designed for wheelchair access or amputee-specific machines, and there are trainers on hand to explain and assist the veterans.

The physical rehabilitation aspects of working out in the fitness centre are clear to all. Less obvious is the psychological benefit that the disabled vets get from taking an active role in their rehabilitation.