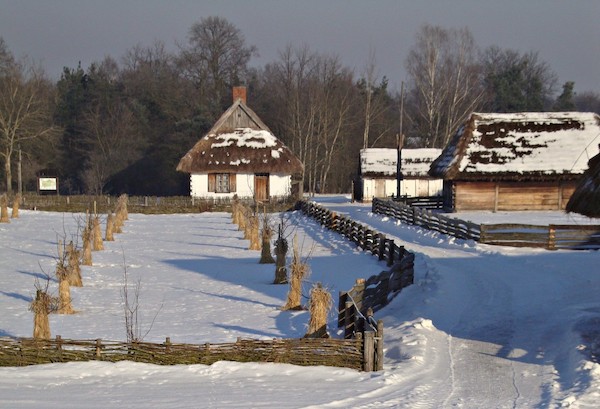 It was just before sunset on the last night of Chanukah, the coldest it had ever been in Chelm. (photo from pxhere.com)

It was a cold day in the village. It was so cold that when Reb Cantor, the merchant, sneezed without covering his mouth, his mucus solidified and blew a hole through the window of his shop, which his wife fixed by throwing a cup of tea at his head. He ducked, and the tea hit the windowpane and froze into place. It was that cold.

It was so cold that the flame of the eternal light in the synagogue froze solid. Instead of flickering brightly, it stood still, like red and yellow glass.

The villagers were frightened. It was just before sunset on the last night of Chanukah. Soup froze on its way from the pot to the table. Vodka oozed as it was poured into a glass. Chanukah candles snapped at the slightest touch. Reb Cantor’s matches broke into splinters. Stoves were almost useless. Warm challahs froze into rocks in seconds. Axes had to be warmed or else, when they struck the firewood, the blades shattered as if they were made of crystal. The Uherka River had frozen solid, trapping in its icy clutches a flock of geese late to leave the area.

It seemed as if the end was near. Everyone was hungry. They were afraid to go outside because the wind sucked the heat from their skin. The air itself left their lips numb. Kissing could be dangerous.

The day had been dark and cold, and the night would be darker and colder. Meals were uncooked and uneaten. Chanukah candles, set in their menorahs, were unblessed and unlit. Families stayed in their homes, huddled together in bed.

Even in the house of the wisest man in the village of fools, the menorah was dark.

Rabbi Kibbitz shivered in his bed with his wife, Channah Chaipul (she kept her maiden name, which, as you know, is another story). The two of them lay fully dressed beneath four sheets, three blankets, two quilts and seven coats – everything warm that they owned. Still, his teeth were chattering. For the first time in his life, he regretted not owning a dog or a cat.

“Channah,” the rabbi said. “We have to light the candles.”

“My hand is too unsteady. The shammos will blow out. You are better at that sort of thing.”

“So? You want me to get out of bed, light the candles, and come back in with icy cold feet?”

He shuddered. The last time she had put a cold foot on his ankle, his heart nearly stopped.

He sighed and closed his eyes. Maybe in a few minutes he would….

“Are you awake?” she said, elbowing him in the ribs.

“Channah!” he said, suddenly sitting up. “I had a dream!”

“Are you crazy? Lie down, you’re letting in a draft.”

“No, Channah, I’ve had a dream. Quickly! Get up! We need to gather everyone together in the synagogue.”

Mrs. Chaipul squinted at her husband. She hadn’t seen him this excited since he’d beaten Rabbi Abrahms, the schoolteacher, at canasta. “What did you dream?”

“I can’t tell you,” he answered. He slid out of bed and gasped as the frigid air slapped his neck like an icy wet towel. “Tell everyone to bring their menorahs and come to the synagogue. Quickly!”

Grumbling and shivering, Mrs. Chaipul stood, and nearly stopped right there. She wondered if it was possible for blood to freeze. Then, the rabbi went one way and his wife went the other, banging on doors and windows. They ran as fast as they could (which was remarkably briskly, considering their ages), waking villagers and telling them to gather in the synagogue.

“Yes, I am,” said Mrs. Chaipul. “But the rabbi has had a dream. So you can freeze in your house or freeze in the shul. It’s up to you.”

Parents groaned. Children were wrapped in blankets. Doors were pried open. Menorahs were carried carefully, lest they crack into pieces on the short trip to the synagogue.

Rabbi Kibbitz stood at the front, on the bimah, with five tallisim wrapped around his shivering old shoulders. He stood beneath the eternal light, staring at the still-frozen flame.

“Is everyone here?” he asked. Everyone looked around and nodded. No one was missing. “Then, please, somebody shut the door!”

“It’s shut,” came a shout from the back.

“So, Rabbi, what is it?” said Reb Cantor. “What is so important that you asked us to risk life and limb to come to the synagogue on a night so cold my eyeballs almost froze?”

“So, I heard,” answered Reb Cantor. “You maybe want to tell us what the dream was?”

“I dreamed,” Rabbi Kibbitz sighed, “that all the villagers of Chelm gathered together in the synagogue.”

“Well, in my dream, it was a cold, cold night, and the Chanukah candles weren’t yet lit.”

“And everyone, all of you, came here to the synagogue.”

“That’s it.” The wise rabbi shrugged. “We were all here. Then Channah nudged me, and I woke up.”

“That’s not much of a dream,” muttered Mrs. Chaipul.

The citizens of Chelm stared in disbelief at their beloved rabbi.

“You’re crazy!” shouted Reb Cantor. “You yanked us out of our moderately warm beds and dragged us here to tell us that you had a dream that we were all here? That’s it? Rabbi Kibbitz has finally lost his mind! Rabbi Abrahms, it is time for you to become the chief rabbi of Chelm.”

The villagers began to grumble and argue and stamp their feet. A wave of exasperated hot air lifted to the ceiling as their voices rose into shouts.

It was young Doodle, the orphan, and one of the most foolish boys in the village of Chelm.

Doodle was pointing up at the eternal lamp. The pale light was thawing – flickering faintly, but growing brighter as it filled the synagogue with its glow of red, orange, yellow and gold.

Reb Cantor himself lifted Doodle up. “Careful, careful now,” he whispered, as the young boy touched his shammos to the light of the eternal flame.

That candle was passed back and forth throughout the shul, as every family lit their own shammos. Everyone held their breath, wondering whether the wind and the cold would extinguish the thin flames.

Then, at long last, the villagers of Chelm said the blessings all together. The shammosim touched the other candlewicks. Soon, for each family, one flame became eight (plus the shammosim).

Now the synagogue was full of light, and the villagers began to sing.

Reb Cantor swept the old rabbi up in a bear hug. “That was some dream!”

Everyone laughed and danced.

They stayed there all night, and the candles burned so slowly that it was well past dawn before the last one burned out.

That morning, when the doors to the synagogue were opened at last, a warm breeze left the shul and spread out over the village.

The ice on the Uherka River cracked, and the flock of trapped geese took flight. All the villagers watched and cheered as the birds sped south.

And, from the east, the sun rose higher, and its rays felt warm with promise.

Izzy Abrahmson is a pen name for author and storyteller Mark Binder, who  lives in Providence, R.I., and tours the world – virtually and in-person. Abrahmson’s Winter Blessings: Warm Stories from the Village was a National Jewish Book Awards finalist.