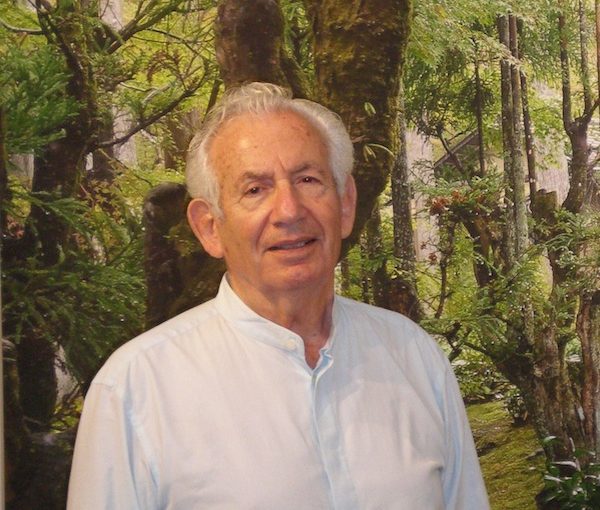 Michael Seelig is donating the proceeds from his exhibit Trees to the Zack Gallery. (photo by Olga Livshin)

Trees, Michael Seelig’s new solo photography exhibit at the Zack Gallery, opened last week. It is a fundraiser for the gallery, which is located in the Jewish Community Centre of Greater Vancouver.

Such philanthropic initiatives “are of ultimate importance to the gallery and the community, as everybody wins when the gallery is well-supported,” said Zack director Linda Lando. “We have approximately three benefits a year, and they come in different ways. Sometimes, they’re initiated by the artist, sometimes by myself or another staff member of the JCC.”

Seelig’s decision to donate all the proceeds came from the heart, and it’s not the first time. His previous show at the Zack, which was held five years ago, was also a benefit. “This is my way of contributing to the JCC,” he said in an interview with the Independent. “We have a longstanding connection to the centre. My wife was president of the JCC some time ago, and we’ve given several donations to the community over the years.”

Unlike his previous show, which focused on architectural images – Seelig was an architect before he retired – this show is all about trees. A cornucopia of greens dominates the gallery walls.

“When Linda asked me to do a show this year, I didn’t have much in mind,” he said. “I started going through my photographs, selected the best 20, and then realized that eight of them were photos of trees. Looking back, I’ve always photographed trees. Maybe I have an affinity for trees. So, I thought I’d make it the theme of this entire show.”

Seelig has been drawn to trees and their unique charm for a long time. “I think my love of trees comes from my childhood, when I was growing up in Israel,” he said. “Jewish people are the only ones I know who have a holiday dedicated to trees: Tu b’Shevat. During that holiday, we cherish trees, plant them, take care of them, so they can take care of us. That tradition probably influenced me from a young age to love trees and photograph them. I take photos of trees wherever I travel.”

In the Zack exhibition, there are pictures of trees from Israel and Scotland, Canada and Japan.

“There is a book I read recently,” Seelig said, “called The Hidden Life of Trees, by Peter Wohlleben. He is a German forester and writer and he knows trees. He says trees form communities. They communicate with each other and with us. It was a fascinating book, and I agree with the author; his book inspired me. Have you noticed that old stumps sprout new growth sometimes? That is because there are other trees around. Trees are life-givers; they create the air we breathe. Without trees, there would be no life on earth.… In Canada, and particularly in British Columbia, we often take trees for granted. Most of us do not pause to look at them and admire their beauty, solidity and permanence. We forget that, without trees, our planet cannot survive. This show pays homage to trees in many parts of the world.”

Seelig’s trees are all different; each one has its own shape and personality. Some are gnarled and twisted, while others stretch up in straight lines.

“I like it that they don’t talk to me,” he joked. “Trees are my models, but they’re more obedient than people when it comes to posing for a photo. I can take my time snapping pictures of trees. They are perfect photography objects. A tree just stands there. You can walk around it, see it from 360 degrees or from underneath. And every view is different. You can’t do this with a person.”

In addition to Seelig’s photographs of trees, the show includes several watercolours, most of which he painted specifically for this exhibit. Only two small works are exceptions. “When I was looking through my archives in preparation for this show, I found a small painting, created by my father in 1940. He painted a street in Haifa, and there is a tree in the image. The second painting is mine; I painted it in 2010, also in Haifa. Seventy years passed between these two paintings, but their colour schemes are surprisingly similar. And there are trees in both paintings.”

The sizes of the images on display vary greatly. While Seelig’s father’s painting would fit in a school notebook, and most of the photographs are the perfect size for a family home, a huge triptych on canvas of one of his Kyoto garden photos would enliven a hotel foyer or a corporate conference room. “I invited some designers to the show,” Seelig said. “Maybe one of them would like it.”

Seelig’s approach to photography is consistently organic. He doesn’t edit his photos with Photoshop, doesn’t even crop them.

“My pictures are exactly what I see,” he said. “And now you see them, too. There are other photographers who manipulate their photos with editing software, many of them wonderful artists, but I don’t do that. I don’t call myself an artist either, even though I use my creativity for many things in my life. I used artistic judgment for my work as an architect, before I retired. Now, I make greeting cards and wedding invitations with my photographs and my paintings. I illustrated a couple of children’s books, written by my daughter and her husband. Even making dinner for our friends is a form of art for me.”

The Trees exhibit runs until Oct. 20.