The images posted at facebook.com/sipurisraeli highlight the diverse stories and people covered on the Israel Story podcast, which is in its sixth season.

The podcast Israel Story started its sixth season in September. The show, which offers a long-form journalism approach to quirky stories of the people and events in Israel that do not often appear in the headlines, has been called the Israeli version of This American Life by none other than Ira Glass, the host of the National Public Radio hit.

Started in 2011 and originally intended for family and friends, Israel Story has grown to attract thousands of listeners. It is one of the most popular Jewish podcasts in the world.

“The rest of this season is packed with moving stories about identity, healing, looking back, and looking forward. We’ll hear about the everyday lives changed forever by a national tragedy, the space project that lifted hopes around the world, an unlikely pro sports team, a soldier’s unexpected journey to tabletop gaming, and an internet scam that made people’s blood boil,” Levi revealed.

Already featured in episodes this season have been the story of a day in which all nine of the show’s producers spent from early morning to evening interviewing various and sundry characters at the historic Jerusalem International YMCA; an effort to save a 2,000-year-old mikvah; and a look at the life of Bung-Ja Ziporah Kim Rothkopf, the woman who opened the Seoul House restaurant in Jerusalem and started KOKO, a Korean kosher food brand. 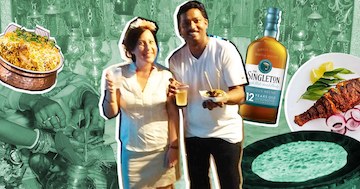 Ever since its beginning, the show has covered the stories of a wide range of groups living in Israel: Jews, Muslims and Christians; Israelis and Palestinians; Ashkenazim and Sephardim; Russians, Bedouin and Ethiopians; Filipino foreign workers and Eritrean refugees; Orthodox and secular; political hawks and doves.

And, not surprisingly, according to Levi, there is an endless source of material for future shows based on Israel, a land of storytellers. Levi said that ideas for topics are supplied by listeners and others, who send in potential stories. The team of producers is also encouraged to chase narratives they think should be told. He said the team prides itself on investing the time and energy to “find the perfect stories that shine a spotlight on what it’s like to be here. We look for the everyday lives that bring listeners to Israeli streets and fill their lungs with Israeli air.”

He added, “We see our show as a platform to display the complexities and depth of living in this amazing part of the world. And there are always unique subcultures and norms and clashes to explore. We live in an area where there are so many different ways to define yourself – religion, culture, politics, race, language – and there are endless permutations of the intersections and clashes between them. The story of how people make themselves is something anyone around the world can relate to and connect with.”

Levi elaborated on the process the team undertakes to determine what stories will be aired. Most episodes run roughly an hour or more with some bonus segments added.

“To paraphrase [Albert] Einstein, a story should be told as succinctly as possible, but no more succinctly than that,” said Levi. “While pitching a story, we generally have an idea of how long it will take to tell it, but, during the production process, there are countless examples of a story being way more complex than first thought, and needing more time. And countless examples of a story being much more simple, and being trimmed down, or even killed completely.”

The team would prefer to curate several stories that speak to different angles of a single theme, or to restrict themselves to three 20-minute stories in each episode, said Levi. However, they feel such an approach would not do justice to the stories themselves.

“When it comes to holding interest, our first defence is our own team,” he said. “We each dedicate time to analyzing when a story loses its engagement, and what we (as listeners) would need to avoid that. Several producers will often weigh in on drafts to make sure the best, most-engaging version of a story is what makes it to listeners. But all our stories are about people. People struggling to be authentic. People struggling to heal. People struggling to achieve. And we can all relate to that.”

Israel Story was founded by Dr. Mishy Harman, who serves as the podcast’s host and chief executive officer. The show can be heard on Apple Podcasts, Spotify and Stitcher, among other streaming services.