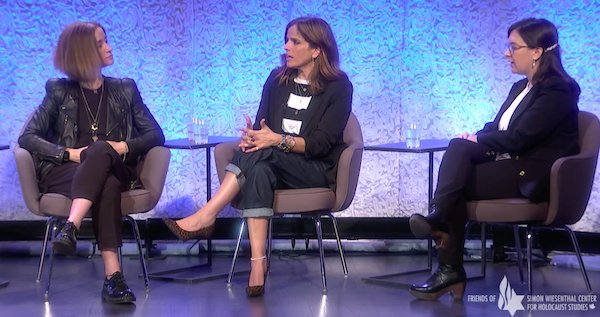 Left to right: Eve Barlow, Noa Tishby and Bari Weiss participate in a Nov. 3 panel hosted by the Friends of the Simon Wiesenthal Centre for Holocaust Studies. (screenshot)

In a time of burgeoning antisemitism and anti-Zionism, Jews need to lean into their identities, says a leading voice in the fight against anti-Jewish racism.

Weiss is a former writer at the New York Times. She resigned her position there, citing a hostile work environment, and is the author of the book How to Fight Antisemitism. She was speaking as part of a panel convened Nov. 3 by the Friends of the Simon Wiesenthal Centre for Holocaust Studies (FSWC). She was joined by Eve Barlow, a pop-culture writer who grew up in the United Kingdom and has worked in music journalism as deputy editor for NME New Musical Express but who, most recently, is using her voice to stand up against antisemitism. Also on the panel was Noa Tishby, an Israeli-American actor, producer and author of the book Israel: A Simple Guide to the Most Misunderstood Country on Earth.

The three women have become prominent voices, online and off, in the fight against the latest upsurge of antisemitism and anti-Zionism. The Nov. 3 discussion took place in Los Angeles, where all three women are now based. They were joined by Michael Levitt, president and chief executive officer of FCSW, and the panel was moderated by journalist Jamie Gutfreund, both of whom traveled from Toronto for the event, titled State of the Union: Fighting Back Against Hate.

Weiss said the first step in confronting the problem must be vocal and unequivocal pride in Judaism and Zionism.

“The mere act of doing that is radical and contagious and changes the whole conversation,” she said. Doing grassroots work building alliances is another overlooked key to confronting the issue, she added.

“Let’s take a page from the book of our political opponents,” she said. “How have they done what they have done? Deep work inside communities on a grassroots level.”

The Black Lives Matter organization – not the wider movement, Weiss stressed, but the leadership of the organization – has exhibited problematic approaches to Jews and Israel. But no one should concede that there are not plenty of African-Americans (and Canadians) who are allies, she said.

Weiss warned that the polarization of politics in the United States and across the West does not bode well for Jews.

“That puts Jews in a deeply uncomfortable position because, I believe, where the political centre thrives, Jews thrive because, if the political centre is thriving, it means that there is room for nuance, that there is room for disagreement, that it’s not a kind of Manichaean, black-and-white, pure-impure, red-blue thinking. Right now, that is the world we are living in and – guess what? – we Jews don’t easily slot into either of those categories. We are both hyper-successful and also we are the victims of more hate crimes than any other group in this country. We are white-passing and yet white supremacists hate us because we are the greatest trick the devil has ever played. We predate the newfangled notions of ethnicity, of race, of religion. We are before all of that. I think that there is a dovetailing between fighting antisemitism and fighting Jew-hate, and standing up for liberalism, broadly defined, because, where liberalism thrives … Jews thrive too.”

Much of the panel’s discussion was about flourishing anti-Jewish hatred online, but Barlow warned that no one should assume there is a substantive difference between what happens online and what happens offline.

“We have seen how [online hatred] has contributed vastly to the amount of physical violence that happens offline and you would have to be extremely ignorant to … say right now that what happens online does not have offline ramifications,” said Barlow.

Tishby agreed, but suggested that offline violence may not be inspired by online hate but rather is part of a broader battle.

“Social media is just the tip of the iceberg of a well-funded political campaign that has been waged against Israel in the past 20 years,” Tishby said. “This is not by accident. This happened by design. The language, everything that we are seeing right now, originated in the Durban conference against racism in Durban in 2001 that was so antisemitic that the U.S. and Israel pulled out of it…. They have been putting a lot of money, a lot of effort and a lot of groundwork in going into these social justice causes, going to Black Lives Matter, going to the Women’s March, going to gay and lesbian marches in San Francisco, going to unions and actually slowly changing their minds and poisoning them basically with lies to make them shift against Israel. These are nefarious powers and nefarious countries that want to dismantle the Jewish state, period, end of story.”

Acknowledging that some of the most prominent anti-Zionists are themselves Jews, Barlow called the phenomenon “koshering antisemitism.” However, she advocates a compassionate response.

“I believe that how we deal with them has to be different than how we deal with non-Jewish antisemites because they are part of our people, we love them regardless and they are part of our tribe and I think we have to really understand the nuances of why people become anti-Zionist,” Barlow said. “I think a lot of what I see is trauma from the Jewish community and a rejection of the Jewish community that presents itself in this anti-Israel fashion.”

She offered up what she acknowledged as a controversial joke: “Don’t blame Israel for your daddy issues.”

Tishby laid much of the blame for anti-Zionist Jews on the Jewish education system.

“We need to take a good look at ourselves and what we did in order to allow for this,” she said. “We took our kids, put them through … this beautiful Jewish education, we give them all the values and we tell them Israel is the most amazing people and place in the world and we send them off to college without ever acknowledging the concepts of ‘ethnic cleansing,’ ‘apartheid.’ We let college talk to them about this for the first time.… Nobody ever [said], let’s talk about why people call Israel an apartheid state. Let’s have a conversation about this, not when they get to college, [but] when the kid is 12, 13, 14, bring it up. Say, here’s the argument, here is where it’s completely false, here are the facts. Let’s talk about what’s happening in the West Bank.”

Weiss, who has spent her career in mainstream media, said those media outlets are “the most intellectually homogenous environment I’ve ever been in in my entire life.” But she warned against swallowing conspiracy theories.

“I think sometimes people in the Jewish community who are frustrated by this bias imagine some kind of secret conspiratorial meetings where they’re cooking up how to screw the Jews and the Jewish state,” Weiss said. “It’s just a reflection of the consistent bias among all the people that work there.”

The power of social media giants like Facebook and their haphazard responses to hate speech are a problem, Weiss said, but Jews and Zionists may be hastening their own defeat by pressuring them to censor certain messages.

“I think it is a genuinely knotty and complicated question whether or not the Jewish community should be going to these big tech companies and saying, in the same way that you’re censoring x, y and z, also censor the people who hate us,” she said. “My fear is that, in asking these companies [to] do more censorship on our behalf, then, in a way, we are actually feeding the fuel that will come to burn all of us. The ideology that is currently dictating the choices at many of these companies is an ideology that says Zionism is racism. That is part of that broader worldview.… What happens six months from now when … they want to go and censor Zionists because now they have decided that Zionism, to follow the Soviet lie, is a form of racism? Would we be happy with that? I don’t think so.”

The full video can be viewed by registering at friendsofsimonwiesenthalcenter.com.