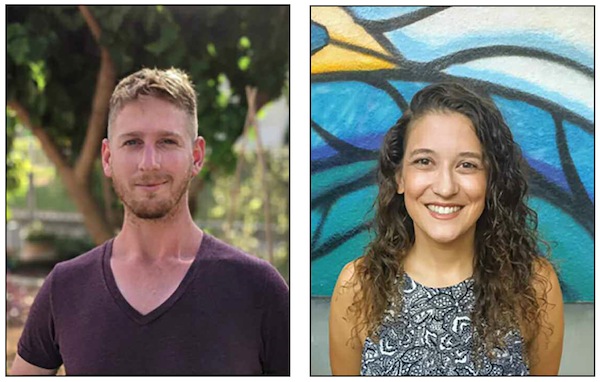 “We are educators at Dror Israel, a grassroots educational organization which works all through Israel,” Schlanger told the Independent. “Our 16 intentional communities of young, trained educators operate a variety of programs, including a network of innovative schools for at-risk youth and Jewish-Arab encounters, which all aim to bring together Israel’s different populations and create a more just and equal society. Our pedagogy focuses on empowerment and community building.”

Comprised of 1,300 people, Dror Israel works in a multitude of fields in Israel and has an impact on the lives of more than 150,000 people each year.

As for their specific involvement in Dror Israel, Schlanger has led a youth centre in Kafr Manda, an Arab town in Lower Galilee, and now works at the community garden in Acre (in northern Israel). Zeiger-Guerra is an educator who is familiar to many young people in southern British Columbia, having worked at Camp Miriam, the Jewish summer camp on Gabriola Island, for several summers. She is also a Habonim Dror alumna.

“I founded and operate a community garden where I work with mainly elderly Russian speakers, and Joanna mentors a cohort of our young educators taking their first steps in a variety of formal and informal educational settings,” explained Schlanger.

During their local visits, Schlanger and Zeiger-Guerra met with a variety of individuals, groups and communities to inform them of their work, specifically Dror Israel’s coexistence programs and ongoing relief efforts with Ukrainian refugee children. These gatherings included talks at Congregation Emanu-El in Victoria and with the Victoria Multifaith Society.

For Schlanger, the message Dror brings – an inclusive vision of Zionism that strives to create a place for everyone, and the dream of a just and equal Israel – is a breath of fresh air amid the polarized discourse about the country.

Dror Israel was started in 2006 by graduates of the Israeli youth movement Hanoar Haoved Vehalomed, who served together in the Israel Defence Forces and shared a belief in the founding principles of Zionism. “Through truly innovative education based on dialogue and understanding, we teach leadership and responsibility for self and community. We promote social activism to drive positive change,” the organization states on its website.

Both Schlanger and Zeiger-Guerra live on urban kibbutzim established by Dror, a recent adaptation of the rural kibbutz. Between 30 to 100 young adults, aged 20 to 40, live on each of Dror’s 16 kibbutzim in Israel and work on the organization’s educational, cultural and social projects. With an emphasis on social justice, members of Dror Israel reside in the neighbuorhoods they serve, seeking to bridge gaps and solve local problems.

Throughout the pandemic, Dror Israel has been engaged in opening daycare centres for the children of doctors, nurses and healthcare workers; delivering groceries and medicines to home-bound seniors and those in need; volunteering on farms; and providing online programming for thousands of teens.

“Our message and the story of our work really resonated with everyone we met and sparked a variety of thoughts about future cooperation between Dror Israel and local organizations,” said Schlanger of his time here. “Our hearts were warmed by people’s decision to support our programs. It really attests to the strong, living connection between the Jewish communities here and Israel.”

After more than two years of being unable to visit or host trips to Israel due to COVID, Schlanger said Dror Israel hopes to reinvigorate connections that began many years ago in the region. Aside from delegations of educators to British Columbia, it looks forward to hosting visits in Israel.

“Joanna and Noam were very well-received,” said Sid Tafler, one of organizers of the emissaries’ stay in Victoria. “Many people were inspired by their message of peace and coexistence in Israel, principles they don’t just espouse but practise and live every day.

“We learned about their compassionate and community-building work with youth-at-risk, isolated older people, members of minority communities – including Druze and Arabs – and integrating new olim recently arrived from war-ravaged Ukraine. We have received guests from Dror before and expect we will welcome them again.”