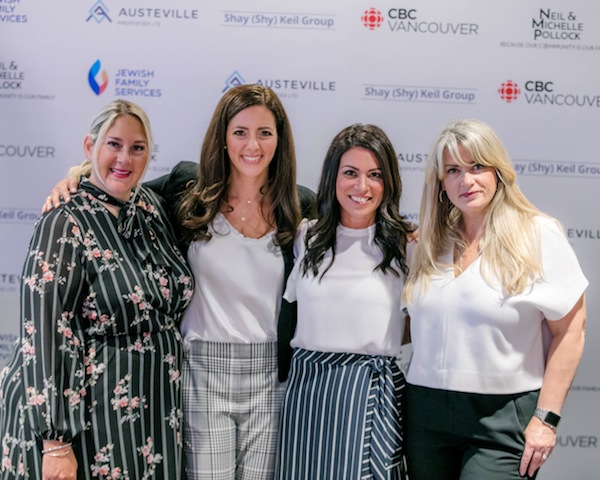 The atmosphere at the Jewish Food Bank on Feb. 22 at the Peretz Centre for Secular Jewish Culture was almost festive. Adults chatted, kids played, as people made their way through the various lines. Vancouver Hebrew Academy students had already come and gone – having delivered more than 200 mishloach manot packages in anticipation of Purim – and Minister of Justice and Attorney General of Canada Jody Wilson-Raybould had stopped in to visit.

“We were thrilled to be able to distribute the Purim packages through the food bank,” Rabbi Dan Pacht, VHA head of school, told the Independent. “It was the idea of Hodie Kahn and Rachael Lewinski, two die-hard VHA enthusiasts … Hodie is a past VHA parent and board member, Rachael is a current VHA parent (and a VHA alum) and board member. They have been largely responsible for building the program to where it is today. They saw this as a great way to bring the lesson of Purim into living colour. So much of the Purim theme revolves around helping others and bringing community together to celebrate – think mitzvot of sending food to neighbours and charitable gifts to those in need. What better way to celebrate as a community than to bring the joy of Purim to more and more families?”

“It’s a powerful symbol of love and friendship among our community,” said Richard Fruchter, Jewish Family Services chief executive officer, about the mishloach manot project in the agency’s February e-newsletter. He also noted that, during Wilson-Raybould’s visit, the minister spoke “with JFS about food security, housing and mental health services. She connected with the dozens of volunteers and hundreds of clients who benefit from this twice-a-month service.”

All of the items provided in the 200-plus mishloach manot gift bags were donated by two Real Canadian Superstore locations: Marine Drive and Grandview. “And they have [donated] for several years now,” said Pacht, stressing his gratitude.

In years past, the initiative has included other Jewish schools – Vancouver Talmud Torah, Richmond Jewish Day School, King David High School, Pacific Torah Institute and Shalhevet Girls High School – and “was an avenue to raise funds for all of the Jewish day schools,” said Pacht, as people donated to have Purim packages sent to friends, family and colleagues. Run under the umbrella of VHA, it was the “Vancouver Jewish Day Schools Purim Project,” he added.

“In past years, we have hosted the event at KDHS and had students from all the schools participate in various capacities,” explained the rabbi. “VTT, VHA and RJDS students packing, KDHS students setting up and cleaning up, PTI and Shalhevet students picking up items from Superstore, etc. We also have had parents from all of the schools volunteer their time to assist the packing process and deliver the packages on Purim day.

“This year, we took a step back and did not run the program as a fundraiser. With only 200 packages being prepared, that were then distributed through the Jewish Food Bank, we managed the entire process in-house.”

VHA also sent out “a mailing containing a Purim kit, with some information about the holiday and a few practical goodies as well,” said Pacht.

“What started in Ruth Huberman’s living room – at the time she was a VHA parent and board member (she now has several grandchildren attending VHA) – preparing about 100 packages, mushroomed into a program that reached the farthest corners of our community. We have over 1,200 families we connect with each year!” he said. “After 10 years of doing the same thing, we found it difficult to maintain the same momentum and enthusiasm. We are looking at various alternative models for next year. Something to refresh the program and keep the community engaged.”

Jewish Family Service Agency has appointed Richard Fruchter as senior management consultant. He began working in this position on Jan. 7, and will be leading JFSA while the executive director search committee continues its efforts in identifying candidates and hiring of the long-term ED.

“We are pleased to welcome Richard, who not only brings with him tremendous experience and a proven track record in not-for-profit organizations in Jewish communities in North America, but also has a thorough knowledge of our Jewish community, having served as the senior management consultant of the Jewish Federation of Greater Vancouver from 2013-2014,” said board chair Joel Steinberg.

“Richard will support the agency with his extensive knowledge in areas of finance, fundraising, communications, board governance and human resources – initiatives that were identified in our strategic plan. Prior to his tenure in Vancouver, he was the president and CEO of the Jewish Federation of Greater Seattle and, over the last 30 years, he has been in top executive positions with federations, Talmud Torah [schools] and other general community organizations in Seattle, Wash., Minneapolis, Minn., and Tucson, Ariz.”

“It’s an exciting time at the JFSA as we build for the future,” said Fruchter. “I will be playing a strategic and advisory role with the board and staff to help JFSA continue to transform the lives of individuals and families, through quality services and innovative programming. The last few weeks, I’ve had the opportunity to visit some of our programs, see their impact, and learn more about how we respond to evolving community needs. I found our staff to be dedicated and committed professionals – passionately working day in and day out to care for their clients. Our board and volunteers are talented and willingly share their wisdom and resources to provide for our community’s welfare. During this transition, I look forward to having renewed and fresh conversations with our community members, leaders and donors about how JFSA can even more effectively service our community.”