The experiential feeling of shame is defined as a painful emotion caused by feeling like you have done something wrong or disgraceful. Shame is a popular trope and is associated with the concept of “Jewish guilt.” However, on the ground and in my practice with tweens, adolescents and adult women, shame carries with it strong painful emotions and regret(s). Shame is a common reaction to anxiety, depression and mental and emotional stress.

For the therapeutic clients who work with me, shame is expressed as all-consuming. In the context of emotional and mental stresses that are relational or situational, common expressions of shame arise of feeling broken, defective and disconnected. My general aim is to acknowledge the power of shame and their particular relationship to it by also normalizing the emotion and experiences with it. As a therapist, I use various creative-, expressive-, psychosocial-, embodied-, feminist-, narrative- and mindfulness-based psychotherapies to work a way inside, through and outside of the burdens my clients are holding. For the purpose of this article, I will focus on mindfulness psychotherapy.

Experiences of anxiety, depression, grief, relationship and family struggles often result in individuals being programmed and aware of the value of, or favouring of, one part of their experience over another – for some, it is intellectual or cognitive abilities; others are guided by emotions; others by physical signals. More and more we are realizing the importance of recognizing and listening to all of our responses as a way to heal and grow. A mindful approach to psychotherapy helps you identify and integrate all of these parts of yourself. Brain science validates this notion and suggests that, by attending to your thought patterns, emotional reactions and sensory experiences, you can change patterns of thinking, feeling and moving in the world. Even complicated mental and emotional health experiences paired with the weight of shame can be tackled using mindfulness as a key component in therapy and applying it in day-to-day life.

Mindfulness practice offers hope for changing unwanted or destructive reactions, belief systems and behaviours that seem fixed or difficult to mobilize. For example, if you have a negative self-view, by noticing the story you tell yourself and considering it a pattern of thinking versus a truth, there is room to reevaluate and create a more accurate description of yourself. And, when you have a more accurate and accepting view of yourself, you are more likely to trust yourself and live more freely. This work is not easy and it is important to proceed gently and in the care of a trusted mental health professional.

I will share a short mindfulness practice that you can do at home. Mindfulness connects one’s mind to one’s body and one’s breath. I like carrying out this mindfulness exercise with my individual therapeutic clients and in group therapy because it serves as a reminder to connect to one’s body and to breathe through it. Through this mindfulness practice, that I call “body scan,” one can gain both emotional and physical clarity and start a naming and eventual cleansing of emotions that do not serve including shame.

Find a place you can sit comfortably, quietly and undisturbed and set a gentle timer for five to 10 minutes. Be kind with yourself and start slowly, with five minutes. The more you practise, the easier a longer mindfulness practice will be.

During the body scan exercise, you will pay close attention to the physical sensations throughout your body. The goal is not to change or relax your body and mind, but instead to notice and become more aware of your body, your mind and your breath.

Begin by paying attention to the sensations in your feet. Notice any sensations such as warmth, coolness, pressure, pain or a breeze moving over your skin. Slowly move up your body – to your calves, thighs, pelvis, stomach, chest, back, shoulders, arms, hands, fingers, neck and, finally, your head. Spend some time on each of these body parts, just noticing the sensations. Remember to breathe as fully as you can, in through your mouth, exhaling through your nose. Your breaths are like gentle and ongoing waves.

After you travel your body, begin to move back down, through each part, until you reach your feet again. Remember to move slowly, and just pay attention, breathing and noticing.

Dr. Abby Wener Herlin holds a doctorate degree from the University of British Columbia. She is the founder of Threads Education and Counselling and works with tweens, adolescents and adults. She carries out themed social justice and creative arts and writing workshops for students, teachers and schools. She is available for therapeutic sessions and contemplative writing workshops. She can be reached at [email protected] or via threadseducation.com. 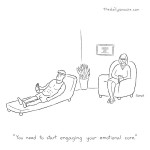 Toronto physician Sharon Baltman treats her patients by listening. Author of the self-published memoir Escape from the Bedside, Baltman, 66, takes readers on the journey of her decision to go to medical school until she ultimately gave up being a general practitioner so she could have more time for her patients.

She said that when she first announced her plans to enter pre-med at University of Toronto, she was told she’d never be a doctor, “because of her long painted fingernails, her big breasts, and the ‘three Ms: marriage, motherhood and medicine.’” She persevered, however, and went into emergency medicine, then family practice.

“I left emergency medicine because I didn’t have enough time for my patients,” she said. “I barely met [them] and rarely saw them a second time.”

She switched to a general practice, she said, “so I would have longer-term connections, but ran out of time trying to deal with both the physical and emotional needs [of the patients].

“In order to hear more about people’s lives, and what made them tick, I finally chose full-time psychotherapy work, so I could have time to listen to their tales in a quiet, un-rushed venue. I chose not to be a psychiatrist, because I did not want to go through another residency.”

While she started with classic Freudian analytic work, she said, she later moved to cognitive behavioral therapy, “to teach patients to deal with the here and now in a concrete way – to reframe their thoughts more positively, and to find the grey zone between the black and white extremes of life.” 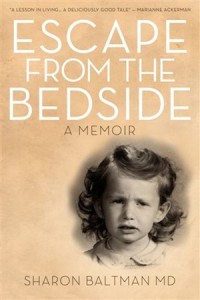 It’s only in the last 10 years, Baltman said, that medical schools have trained doctors in narrative medicine, a method whereby physicians do not merely treat medical problems, but take into account the specific psychological and personal history of the patient.

“It is a way of listening closely to patients’ stories about their illness. Instead of asking, ‘Where is your pain?’ narrative medicine has physicians asking patients to tell them what they need to know about them. By telling us a story, we get a lot more information about [our patients] and their illness.”

For example, she said, if someone comes in complaining of chest pains, “a doctor typically asks where, for how long, and if they’ve had it before. With narrative medicine, the doctor keeps interrogating until they get the whole story. Maybe it’s stress-related, maybe it happens after a certain activity. They try to dig into the story.”

Patient care is much better, said Baltman, if physicians know everything that is going on. “On the [other hand], patients feel heard. An important piece of narrative medicine is that everyone is humanized.”

She said that there are doctors who have been practising narrative medicine for years, “but now it is an important part of medical school curriculum. When students learn about eye disease, they may also read a story about someone losing their vision, so students get an idea of what the patient is going through. They learn about a patient’s experience by reading about them.”

Baltman said that, in retrospect, her career was headed in the direction of her current practice from the beginning. “My career took me here because I wanted to listen. Now, I have the opportunity to talk to my patients.”