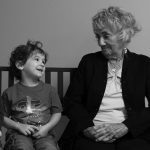 Isabella: What do you do that makes you very happy?

Isabella: Well, if you find something that makes you happy, that’s what you should do.

As part of the Jewish Community Centre of Greater Vancouver’s celebration of its 90th birthday, the centre brought together its members who are age 90 and better with children from the Karen and Gary Simkin Family Child Development Centre Preschool.

Preschool director Jennifer Trickett and her staff helped the children create and practise questions that they were curious about to ask the seniors. Questions covered such topics as “What games did you like to play when you were a kid?” and “Do you get hugs from your children?” The children also sang songs.

The JCC has 25 members who are age 90 and over, most of whom are at the centre multiple times a week to exercise, socialize, learn and play. For more information about special membership pricing for adults age 65-plus, contact membership director Alexis Doctor at 604-257-5111. 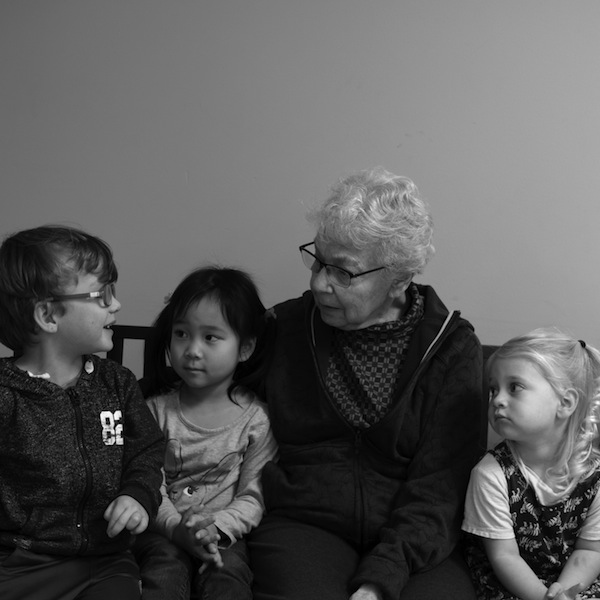 Gloria: Where do you live?

Joyce: I live in a condominium.

Gloria: Well, I live in Vancouver.

Shiloh: Do you come here in the car?

Joyce: I came in a car today. My daughter drove me.

Shiloh: My mommy drove me!

Asher: Do you live in space?

Joyce: Sometimes I think I do! But, mostly in Vancouver. 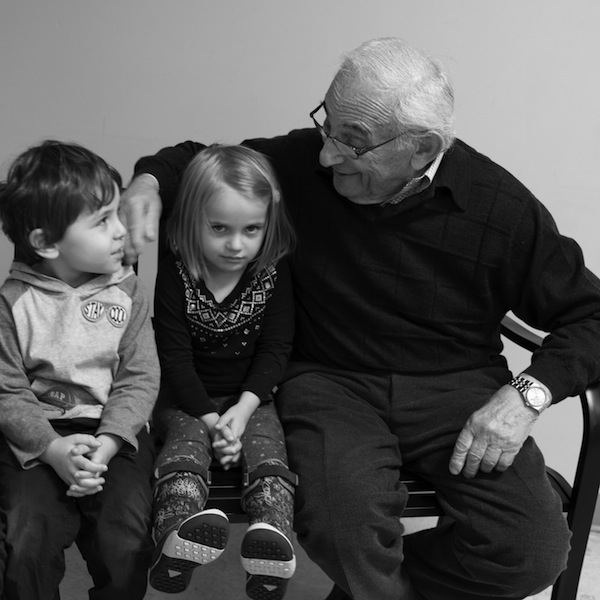 Sam: Do you ever hug your grandchildren?

Danny: Yes, very big ones, they’re even kissing me, too. 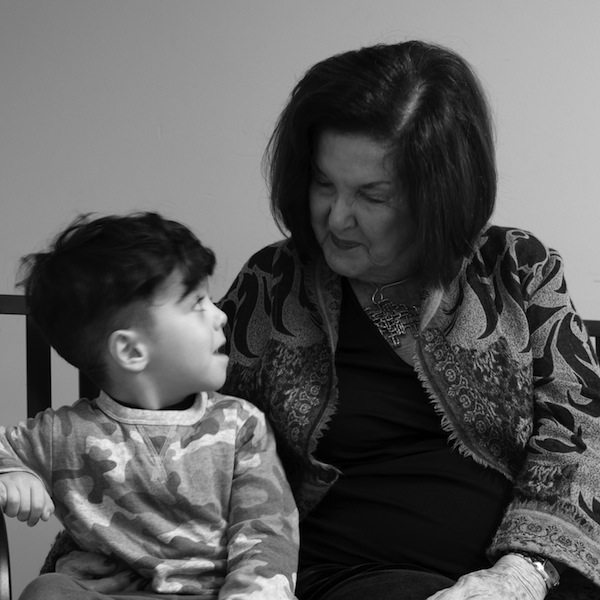 Milo: What did you like to play when you were little?

Grace: I liked to play baseball. How about you?

In the JCCGV’s program for 2-year-olds, there are only a few spots left for September 2017. (photo from Jewish Community Centre of Greater Vancouver)

Hidden at the end of the hall on the garden level of the Jewish Community Centre of Greater Vancouver there is a preschool program for 2-year-olds with just a few spots left for September 2017.

Shalom Aleph and Shabbat Shalom are small classes especially designed to be a child’s first introduction to school, a chance to learn through play with other children in an environment rich with materials to spark creativity and critical thinking skills.

Children are welcomed by early childhood educators and invited to choose what learning centres they want to spend time in. There is a place to glue things together, paint and play with play dough. There are blocks for constructing, a toy house for imaginative play, books to look at and enjoy, as well as sand and water for sensory exploration. Songs, stories and conversation fill the room, as children begin to learn how to be together in a group, how to take turns and how to negotiate and share, with kindness and compassion.

This preschool program and all the licensed early childhood programs at the JCCGV’s Simkin Family Child Development Centre are inspired by research from the preschools in Reggio Emilia, Italy, and guided by the B.C. Early Learning Framework from the Ministry of Education. The Child Development Centre is a Sheva cornerstone community and a designated lab school community – Sheva is the Jewish early learning framework of the Jewish Community Centre Association of North America, which celebrates children as competent, capable and curious.

Director Susan Hoppenfeld would be delighted to take interested parents on a tour and share more details about the preschool program. She can be reached at 604-257-5162. 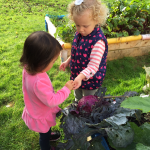 Naomi Hazon’s daughter, Maayan Cohen, with the striped sleeves, has been attending Beth Tikvah’s Shalom Preschool for a year. The youngsters have supervised access to an outdoor play area and garden. (photo by Naomi Hazon)

Watching parents pick up their kids at Beth Tikvah Congregation’s Shalom Preschool and then touring the facility with teacher Esther Karasenty once the hallways had cleared, it is hard to believe that only a year ago, the program was in danger of closing for lack of enrolment. No such problem now, however, and parents wanting to check out the school for their 2.5- to 5-year-old should visit sooner rather than later.

Karasenty has been teaching at Shalom Preschool since 2008.

“Esther has the skills and training to work with children and a very natural ability to connect with children…. She’s able to build trust and make connections,” parent and schoolteacher Naomi Hazon told the Jewish Independent about Karasenty.

Karasenty is “the next best thing to when Mommy’s not around. I don’t feel worried, ever, when I leave my daughter here,” Hazon said.

In addition to her teacher credentials and extensive experience – in early childhood education and instruction, and in teaching special needs children – Karasenty also speaks five languages: English, Hebrew, Portuguese, Spanish and French. Yet, even with such a capable teacher, when Hazon went to register her daughter Maayan last year, she was told that the preschool was probably going to close within a year because of low enrolment.

About that situation, Karasenty said, “The population around here changed a little bit. Young couples started selling their homes and moving away from Richmond, so we didn’t have a lot of new children that belonged to Beth Tikvah itself,” and the preschool was previously “directed toward the community of Beth Tikvah.”

When Hazon found out that the preschool she herself had attended as a child might close, Karasenty said, “She just said no.” Hazon “worked really hard to bring it back to life. It was amazing,” said the teacher. When she joined forces with Beth Tikvah to open it up beyond the synagogue community, “she reached out to everybody and that made the difference,” said Karasenty.

“In the matter of a few months, we had several open houses,” said Hazon, as well as “families through in the evenings.”

Hazon also contacted Lissa Weinberger from Congregation Beth Israel, who sent an email to the Jewish children’s book mail-out program PJ Library, to build “community connections and get the word out.”

As well, Beth Tikvah hired a new program director, Hofit Indyk, who has worked with Hazon to advertise and market the preschool.

“We have updated our website and we advertise more on social media,” said Hazon.

Preschoolers whose families are not members of Beth Tikvah “just pay a slightly different fee for being non-members,” Hazon explained, “and members’ children are obviously welcome, and we are also open to non-Jewish families that are also in our community.”

This fall, five of the eight students will be Jewish. Other cultures represented include Japanese and Indian. “So, we have really mixed families,” said Hazon.

“Even within the Jewish families,” she added, “it’s often a place where families who have mixed marriages and maybe one parent hasn’t converted, they feel welcome here.”

Hazon shared the story of a family who recently moved here from Brazil. “Their child speaks barely any English and, by word of mouth, they hear that [Karasenty] speaks Portuguese, and [their son] is able to speak his first language with her and he was able to settle in right away.”

When Hazon was signing her daughter up for Shalom Preschool last year, the Jewish Community Centre of Greater Vancouver program for 2-year-olds had a lengthy waiting list. She describes Shalom Preschool as a “hidden gem” because it is providing Jewish education to her daughter “with an incredibly gifted and talented teacher in a small group setting and it’s local and, you know what, it’s affordable … and it’s inclusive.”

Karasenty derives her approach from Maria Montessori who, explains Karasenty in Beth Tikvah’s December 2015 newsletter, “was an Italian physician, educator and innovator, acclaimed for her educational method that builds on the way children naturally learn. At Beth Tikvah Shalom Preschool, I follow those guidelines, creating an environment that will promote children’s development: offering them cognitive, physical and emotional experiences that will help them in becoming critical thinkers, human beings who will have the clarity of vision to direct and shape the future of our society.”

As the Jewish community becomes more dispersed – the latest figures cited by the Jewish Federation of Greater Vancouver show that 46% of Lower Mainland Jews now live outside of Vancouver – Hazon said, “It is important that people access what’s locally available to them and that you give back to your community to keep things going.”

“Beth Tikvah is here,” said Karasenty, “to keep on the feeling of community.”

Shalom Preschool runs Monday through Friday, 9 a.m.-noon, with Shabbat-themed programming every Friday. The preschool is still accepting registration for the fall. For more information, visit btikvah.ca/learn/shalom-preschool or call 604-271-6262.