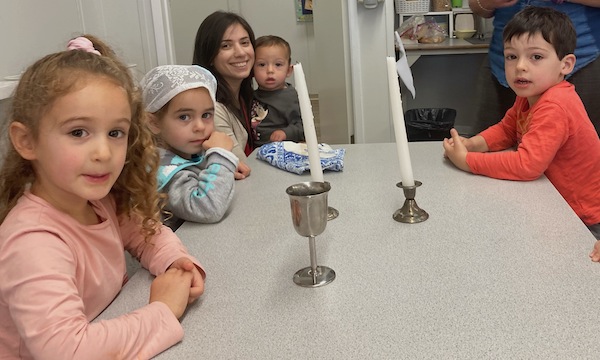 Sara Solomon, Richmond Jewish Day School’s new program director for early education, knows firsthand the importance of a community-centred Jewish day school. She can remember making the daily half-hour bus ride each way from Richmond to Vancouver to attend the nearest Jewish elementary school. It wasn’t until 1992, when RJDS opened its doors, that she could attend school closer to home. But it isn’t sentimentality that has drawn her back to RJDS. It is the school’s novel and forward approach to teaching elementary education.

“[RJDS’s] family-centred culture of the school and the progressive approach to education … aligned with my own values,” said Solomon, who graduated from Langara College in 2010 with a diploma in early childhood education and a certificate in special needs. She said the school’s focus on innovative teaching methods for individualized education aligns with her own practice of “emergent curriculum” – a teaching method that supports the belief that children excel when they are permitted to learn at their own speed and according to their own strengths, interests and abilities – was a deciding factor when it came to applying for the position.

RJDS offers two preschool programs: Gan Alef, for infants and toddlers (0-3 years old) and Gan Bet, for children ages 3-5. For both, the school employs what RJDS principal Sabrina Bhojani refers to as a “constructivist play-based approach” to education. Instead of using teacher-led lessons and activities, educators use curiosity and inspiration to nurture the child’s development. “This provides opportunities, experiences and materials that are responsive to children’s interests and passions,” said Bhojani.

Although the children are usually in group settings, individuality of expression is encouraged. “We also weave Judaic concepts and history through storytelling; language and traditions are experienced through holiday celebrations and Hebrew songs,” Bhojani explained.

“We try to incorporate [the curriculum] in as natural a way as possible without it seeming like we’re inputting information,” Solomon added. The curriculum often uses Jewish holidays to inspire exploration of colours, themes and Hebrew words. “For Sukkot, [we had] a picture of a sukkah and there was a discussion about what the sukkah is, how it’s used,” she said by way of example.

The school also had a small sukkah outside that the students could visit. “The younger children were given some natural materials the teachers collected from outside,” along with some paints. “The older group were given the leaves or needles from an evergreen tree for the roof, some popsicle sticks and a few other things. There was no expectation for it to look like a sukkah,” Solomon explained, noting that the kids weren’t given specific exercises or told to decorate the structure. But the materials were provided for creative expression and exploration that eventually led to decorating the sukkah.

Bhojani said the new RJDS-run early education centre was created to overcome several challenges facing the Richmond Jewish community. The first was to expand access to early childhood education, an urgent need that is being felt throughout the Metro Vancouver area and beyond.

According to Bhojani, infant-toddler spaces are in high demand across British Columbia. “In the last few years, the number of childcare spaces has simply not been enough to meet the needs of families. This has been a province-wide issue, but it has been far worse for families in Richmond, particularly those families seeking a place they could be assured that their Jewish children could express themselves in an authentic manner.” At the moment, she said, “RJDS Early Learning Centre is the only Jewish child care in the Lower Mainland that accepts child under 18 months old.”

The new centre will support continuity of education for children throughout the elementary school experience.

Bhojani said the previous preschool was run by an independent contractor that rented space from RJDS, but its curriculum wasn’t synchronized with what was being taught in the upper grades. “[Being] that it was a third-party organization, we had no authority or oversight in the daycare’s programming,” she said. With the demand for childcare spaces, the former preschool also wasn’t able to guarantee availability for families that wanted to enrol all of their children at RJDS for preschool through Grade 7 attendance.

“We realized quickly we needed our own licensed facility,” and one that fit with the new lesson plans, Bhojani said. “Soon after, we made a commitment to building our own learning centre in order to be able to better serve our community.” That included renovating parts of the school.

The improvements were paid for by two local grants, one of which was specifically tailored to increasing the number of childcare spaces in British Columbia. The B.C. New Spaces fund, offered through the provincial government, helped cover the cost of structural renovations in the preschool area.

The second grant came from the Jewish Community Foundation, which provides unrestricted grants for a wide variety of community needs. While the school did not disclose the amounts they received from each grant, Solomon said the two grants allowed them to make targeted upgrades in time for the 2022/23 school year.

“So far, we have been able to repaint the building, put in all new flooring, upgrade the lighting, and the next steps are going to be some plumbing upgrades,” Solomon said.

The school will still have some further additions to make, such as a new washer and dryer, a sink in one of the classrooms and some improvements in the outdoor play space. Solomon said she is hoping the school will be able to develop an engaging play area, where classes can be held outdoors, too. “We have the most beautiful property here,” she said. “We are on farmland and we are really hoping that we can incorporate that into our outdoor play space.”

Bhojani said the school’s new early education program director comes with the life experience and drive that will help make the new preschool a real success. “As an original RJDS graduate, current school parent and former board member, Sara Solomon has an unparalleled dedication and commitment to our school,” said Bhojani. “She, along with a highly qualified and experienced staff, in the short time that we have been open, have created beautiful spaces in which children feel nurtured and loved.”