The 35th annual Vancouver Writers Festival includes many members of the Jewish community among the more than 115 authors from across Canada and around the globe who will join the events on Granville Island and elsewhere Oct. 17-23.

The guest curator of this year’s festival is 2021 Scotiabank Giller Prize winner Omar El Akkad, who has invited a wide range of authors, including Noor Naga (Egypt), Elamin Abdelmahmoud (Ontario) and Threa Almontaser (United States) – and many others – to join him for six conversations that focus on home, identity and storytelling

Among the Jewish community members participating in the festival are Méira Cook, with her adult-young adult crossover novel, The Full Catastrophe, in Mecca, Mitzvah and Milestones, and in Wry Humour for Modern Life; Tilar J. Mazzeo (Sisters in Resistance: How a German Spy, a Banker’s Wife and Mussolini’s Daughter Outwitted the Nazis) speaks with Marsha Lederman (Kiss the Red Stairs: The Holocaust, Once Removed); Sarah Leavitt facilitates a workshop led by University of British Columbia’s creative writing department; and Guy Gavriel Kay (All The Seas of the World) takes part in Fabulous Historical Fantasy.

Lederman is one of the authors participating in the The Power of Story: Live Recording for CBC’s The Next Chapter, she hosts Generational Fiction: Stories of Lineage, History and Things Passed Down, and moderates Bestseller to Blockbuster. Actor, theatre critic and UBC professor emeritus Jerry Wasserman moderates Building Suspense, on writing thrillers, and Dr. Gabor Maté talks with Globe and Mail reporter Andrea Woo about his latest book, The Myth of Normal: Trauma, Illness and Healing in a Toxic Culture.

Festival tickets ($25) can be bought online at writersfest.bc.ca or at the event venue, starting 45 minutes prior to the performance. There are discounts offered for regular events to seniors (10%) and youth under 30 (50%).

“I remember the deep pleasure I had as a child when I first began reading,” author Méira Cook told the Independent. “It was like climbing into a book and pulling the covers down over my head. When I write, I feel as if I’ve returned to that world. My greatest wish is that readers experience the absorption in reading my novels as I’ve had in writing them.”

Cook’s latest novel – her third – is Once More With Feeling (House of Anansi Press Inc., 2017). Readers will be immediately drawn in by the cheerful, optimistic and a bit naïve Max Binder, whose “many friends tend to exaggerate the dozens of half-full glasses – and some of them considerably less than quarter-full, it’s been pointed out by a couple of the more sour and dill-picklish ones – that he has eagerly poured into another until presto, not only is the glass full but it runneth over.”

Because, for Max, “hope is not merely a feathered thing, a bird, or an equation for water and glass. Hope is where he lives, where he hangs his hat and unbuckles his belt.”

So begins Once More With Feeling, with Max at the airport – where he’s never been “without running into someone he knows, however tangentially” – to pick up a visitor he’s invited as a surprise for his wife Maggie on her 40th birthday. The light tone lulls readers unfamiliar with Cook’s previous work into the expectation of a nice, light read, albeit one full of insight into human nature and wry observations on life. But, while there is much humour throughout, the novel is substantive and serious, and the writing demands that readers do some work.

The story of the Binder family – Max, Maggie and their two sons – and the community they live in, Once More With Feeling “explores how different family members are affected by tragedy, and how the Binder family’s trauma ripples out into the larger community,” explained Cook. “The novel began as a series of linked short stories centring on the Binders, but also veering off into other characters and situations. The structure I’d envisioned was of a year in the life of a city (Winnipeg), with each story taking place during a different month. I loved that sense of turning seasons and changing weather that we prairie folk experience so keenly.

“In the process of writing Once More With Feeling,” she continued, “I began to realize that, while we often like to believe that we are the protagonists of our own autonomous stories, really we are all connected, all linked in hidden and sometimes unexpected ways, all parts of a larger novel. In Winnipeg, we cherish the fond belief that we’re connected by two degrees of separation rather than the customary six degrees. I wrote my novel with this in mind – that people who live in different parts of the city, different neighbourhoods, are nevertheless connected not only through mutual friends and acquaintances but also in their shared humanity.”

The connections aren’t always easy to make in Once More With Feeling, and readers who like linear narratives will find the novel challenging. Some of the chapters have little to nothing to do with the Binders. But Cook is a master at creating characters – and Winnipeg would be one of the many in this book – that seem real, like people we know or have known, or who resemble ourselves in ways. The writing is excellent; many passages are hilarious, others are breath-catching. Cook is a perceptive observer and intelligent commentator. Perhaps not surprisingly, she was a journalist in her home country of South Africa.

“I came to Canada in the early nineties and lived for a couple of years in a small town three hours north of Winnipeg,” she said. “I’d previously lived an entirely urban existence in a large, bustling city, Johannesburg, where I was a film and drama reviewer. Suddenly, I found myself in a very small town (the population was about 500), where I could no longer work as a journalist. I’d never seen snow before and, since I’d arrived in February, there was an awful lot of it. I experienced culture shock as a devastating loss of identity, the loss of everything I’d known before. When I looked out my window, the snow seemed as white and blank as a page. I began to write – first poetry, later fiction – as a way of leaving my mark on that page.”

In addition to her three novels, Cook has published five books of poetry. In Canada, she also has lived on the West Coast for a spell.

“My husband and I lived in Vancouver for four years while we were studying. In those four years, I received my PhD in Canadian literature and had three children,” she said. “Despite how fertile a place Vancouver was for us, we returned to Winnipeg for work reasons. (Perhaps we were afraid that if we remained in Vancouver we’d have another three children!) My daughter had her naming ceremony and my twin sons had their britot at Beth Israel Synagogue on Oak.” 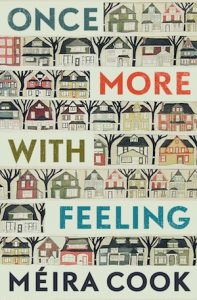 Once More With Feeling has numerous Jewish aspects, from several characters, including Max, to topics such as the Holocaust, and how we remember and learn from it.

“Maggie isn’t Jewish but I didn’t have a specific reason for this in the sense of wanting to portray an intermarried couple,” said Cook. “I was interested in representing a city that is as diverse and vibrant as the Winnipeg I live in.”

For Cook herself, she said, “Judaism has always been important to me but I didn’t always feel that I was important to Judaism. When I was growing up in Johannesburg, my family attended an Orthodox synagogue and I often felt excluded and sidelined as a young girl and, later, as a woman.

“Through the years, I found my way back to my lost religion via the Conservative movement. My family attends an egalitarian synagogue in Winnipeg, where we sit and pray together, and where my daughter had her bat mitzvah six years ago. Watching my daughter reading from the Torah was such a deeply meaningful experience; it inspired the section of the book related from the point of view of the mothers watching their children grow up and become sons and daughters of the commandments.”

This chapter – called “Tree of Life” – is especially poignant, while also providing a critique of various social mores with wit and tenderness. And Cook doesn’t only put a lens on the Jewish community, but also on larger societal issues, such as racism toward First Nations people and the problem of homelessness.

“I don’t censor myself when I write but I certainly do when I revise,” she said about tackling controversial subjects. “Stephen King once said: ‘Write with the door closed, edit with the door open.’ And Hemingway is supposed to have advised: ‘Write drunk, edit sober.’ The model I follow is less decadent but similar in intent: write in a dream, edit when you wake up.”

And how does she know when to step away from the keyboard?

“There is a point where the writing doesn’t feel personal anymore. The story that has for so long been floating in your head or been messily transcribed from longhand notes to a Word document, that story hardens into conviction, becomes real.”