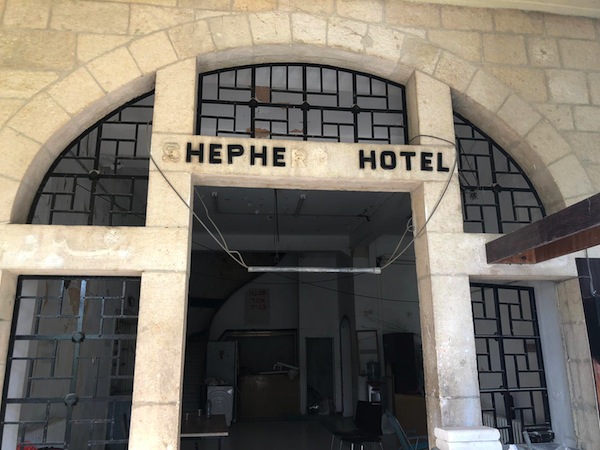 Hajj Amin al-Husseini’s mansion turned into the Shepherd Hotel for a period of time. (photo from Daniel Luria)

Hajj Amin al-Husseini, the mufti of Jerusalem in the 1920s and 1930s, who spent much of the Second World War in Berlin as a Nazi collaborator and war criminal, must be spinning in his grave in Beirut. The landmark mansion he built 88 years ago in affluent Sheikh Jarrah, between the Old City and Mount Scopus, is slated to become a synagogue in a future 56-apartment Jewish neighbourhood in east Jerusalem.

The 500-square-metre manor house, called Qasr al-Mufti (the Mufti’s Palace) in Arabic, today stands derelict at the centre of a largely completed 28-apartment complex which itself lacks an occupancy permit. The reason the new neighbourhood is not being finished – and indeed has not been marketed in the 10 years since demolition and construction began – is that the developers have applied to rezone the 5.2-dunam site to double the number of units to 56, according to Daniel Luria, a spokesman for Ateret Cohanim, which backs the housing project.

Luria was unclear when the rezoning application would be approved. The historic house at the core of the site will be preserved and repurposed for communal needs, including a synagogue and perhaps a daycare centre, he said.

“There is a beautiful poetic justice when you see the house of Hajj Amin al-Husseini crumbling down,” said Luria.

Though al-Husseini built the mansion, he never lived in it. Following the outbreak in 1936 of the Arab Revolt against the British Mandate government, the mufti became a fugitive, hiding in the Old City’s Haram ash-Sharif. When the British attempted to arrest him in 1937, he fled Palestine and the British made do with confiscating his property. The al-Husseini clan owned numerous properties in Jerusalem, among them the Palace Hotel (today the Waldorf Astoria), the Orient House and the villa subsequently turned into the Shepherd Hotel in Sheikh Jarrah on a plot of land known as Karam al-Mufti (the Mufti’s Vineyard), named for al-Husseini.

Among those who did occupy the mansion was his secretary George Antonius (1891-1942), who wrote The Arab Awakening while living there, in 1938. Antonius’s widow, Katy, continued living in the building, which functioned as a salon where wealthy Palestinian Arabs and British officials socialized. (The city’s British sports club had a “No Natives” policy.)

At one of her elegant soirées in 1946, she met Sir Evelyn Barker. The much-decorated general was commanding officer of the British forces in Palestine and Trans-Jordan from 1946 to 1947. The two carried on an affair and exchanged Judeophobic love letters. In April 1947, he wrote her about Jews: “Yes, I loathe the lot – whether they be Zionists or not. Why should we be afraid of saying we hate them. It’s time this damned race knew what we think of them – loathsome people.”

On April 13, 1948, both Scottish Highlanders garrisoned at the mansion and other British troops stationed at the nearby Police Academy failed to intervene for eight hours when a convoy of doctors and nurses headed to Hadassah Hospital came under fire from Arab guerillas. Seventy-eight Jews, many doctors and nurses, died in the massacre.

Following the War of Independence, the al-Husseini mansion became the Shepherd Hotel in the now-divided and impoverished city. It was eclipsed by the Hotel Jerusalem Intercontinental, today called the Seven Arches, which opened on the Mount of Olives in 1964. After the Six Day War in 1967, when Israel conquered and annexed east Jerusalem, the hotel was taken over by the custodian of absentee property.

In 1985, it was sold to C and M Properties Ltd., owned by Florida bingo hall billionaire Irving Moskowitz (1928-2016), the benefactor of right-wing Israeli settler groups intent on housing Jews in the eastern side of the now united city. Following the zoning of Plan 2591, a request was made on Nov. 6, 2008, to permit the company to build two new residential blocks, including 28 apartments on top of an underground parking lot. In January 2011, the four-storey Shepherd Hotel annex – added on to the mufti’s original mansion – was demolished to make way for the future housing.

Rather than attempt to rezone the site – which adjoins the British consulate – for a higher density at the beginning of the redevelopment process, it was decided to build what was legally permitted and later apply to amend the zoning, Luria explained.

“Ateret Cohanim is not involved in the building project but we have an interest in strengthening Jewish roots in and around the Old City,” he said.