A section of Jerusalem’s Old City, near the Jaffa Gate, is illuminated with a greeting to welcome the establishment of the new Paraguayan embassy. On May 22, the municipality welcomed the establishment of the third embassy in the capital – the United States and Guatemala moved their embassies to Jerusalem earlier in the month. The next country to make the move to the capital is thought to be Honduras. 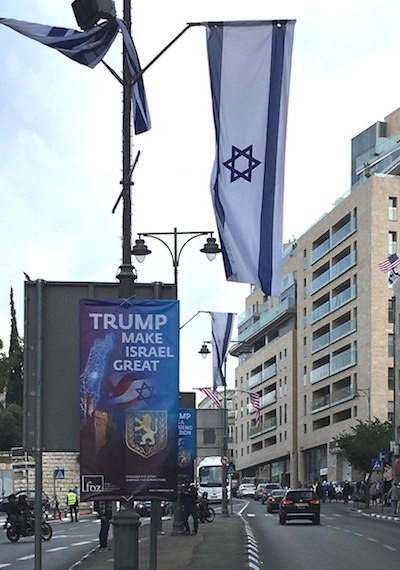 Andrew Scheer was two days old when Joe Clark was elected prime minister of Canada in 1979. In that election campaign, then-Progressive Conservative leader Clark promised to move the Canadian embassy in Israel to Jerusalem from Tel Aviv.

Cabinet documents recently released help explain why that promise was never fulfilled. There were diplomatic and, yes, commercial considerations though, at the time, the government claimed potential backlash from Arab states and businesses was not a factor.

Andrew Scheer is now leader of the Conservative party, facing a different Prime Minister Trudeau, and this week he promised to, well, you guessed it.

“Canada’s Conservatives led by Andrew Scheer will recognize Jerusalem as Israel’s capital when we form government in 2019,” declares a pledge on the party’s website. It describes the party as “a strong voice for Israel and the Canadian Jewish community.”

The statement came in the form of a petition-type pledge on the party’s website. That is, for those unschooled in the modern art of email harvesting, a strategy – legitimate and legal, certainly – of inviting people who agree with a topic to sign their name (and share their email address). The party can then target that voter, knowing they have a particular interest in the topic.

Again, there is nothing untoward about this, in general. But if a party that wants to form government chooses to issue a significant platform plank or promise dealing with one of the most contentious diplomatic issues in the world, perhaps a speech in Parliament or other suitable venue would be a more appropriate medium than a partisan webpage unabashedly accumulating names of voters for future political solicitations.

It is also so blatantly an imitation of the U.S. president’s shameless move on the issue. As we wrote here at the time, Donald Trump’s actions were not motivated by principle, but by sheer political calculation. Or, inasmuch as that president is not given to overthinking matters, more intended as a slap in the face to his political enemies.

We will leave aside here whether the embassy move is a good idea, a fair one, timely or otherwise merited or unmerited on substance. The point here is that the Conservatives are exploiting this issue for political purposes – and that is not good for Israel or for Jewish Canadians.

When Justin Trudeau became prime minister and effectively adopted the same policy approach vis-à-vis Israel as his predecessor, it was clear that a Canadian consensus was essentially in place. The New Democratic Party, in convention a few days ago, managed to put a lid on most of whatever dissent there was on this topic. Elizabeth May, the leader of the Green Party, put her leadership on the line in the summer of 2016 to let her members know she would not lead a party with an extremist agenda toward Israel.

This consensus is not a result of stifling free expression or of Zionist power or of anything other than a fair Canadian reading of important world events. In other words, for whatever else we disagree on, Canadians, by and large, accept Israel’s right to exist free from terrorist attacks.

Scheer’s move this week is cynical. It turns the legitimate consideration of the embassy’s location into a partisan one, when it should be entertained within the broader consensus we have developed. That is not the kind of voice Israel or Jewish Canadians want from our elected representatives.

Last week, U.S. President Donald Trump recognized Jerusalem as the capital of Israel. There are a number of issues to unpack in his (un)diplomatic announcement.

First, rioting by Palestinians and others around the Middle East, as well as potentially related attacks on Jewish institutions in Sweden, are acts of violence that deserve to be condemned, with no excuses or legitimation.

Second, as for the president’s decision, we can leave aside partisanship from the mix. Former presidents Bill Clinton, George W. Bush and Barack Obama have all made effectively the same statement: Jerusalem is the undivided capital of Israel.

But we need to separate the ethical from the pragmatic. For whatever else it is – home to holy sites of three religions, a multicultural, multifaith, multilingual metropolis – it is Israel’s capital. Tel Aviv may be the economic heart of the country and the first modern Jewish city, but it has always been toward Jerusalem that the national aspirations of the Jewish people have been directed. But, the fate of Jerusalem is considered one of the core issues to be addressed in any permanent peace agreement that results in a two-state solution. Whether or not recognizing Jerusalem as Israel’s capital is the morally right action, the pragmatic truth is that the president’s move was not inspired by a desire to do right.

The most charitable thing we can say about the president’s Jerusalem decision is that he kept his promise to evangelical Christian voters. He was unequivocal before the election on this issue and, unlike those who came before, he appears to be following through. The same can be said on many other fronts where conventional observers assumed a cooler head would prevail once the weight of the office descended on the showman. The provocations around immigrants, the racism, the assaults on even members of his own party – none of these has eased since he moved into the White House. While Congress has ensured the president has so far passed no legislation of consequence – though a sweeping and irresponsible tax bill is on the horizon – the president has behaved just as he did when he was a candidate, esteem for the office, personal dignity and respect for others be damned.

Again, there may be disagreement on whether moving the embassy is a good thing, a bad thing, ill-timed or overdue. But let us not pretend that the president was moved by any ethical, theological or political morality. This was just the latest in a succession of provocative actions through which the president thumbs his nose at anyone with a modicum of nuance, diplomacy or sense of the larger geopolitical reality.

Trump likes to stir things up and this time he did it using Jerusalem. This is no favour to the Jewish people or Israel. We may, in fact, suffer its consequences alongside many in the Palestinian territories who may lose their lives in riots and skirmishes precipitated by this thoughtless edict. All of us are just the tools in another of his childish, and very dangerous, games.

When President Donald Trump heads to the Middle East, the world will be primarily watching closely to see if he makes any of his trademark gaffes that set off a cultural land mine in Saudi Arabia or Israel. But the more important question is whether he will use the trip to actually make policy.

The expectation is that, at some point during his visit, Trump will announce the convening of a new Middle East summit. Trump appears to believe in the “outside-in” approach to peace talks, in which Arab states like Saudi Arabia would play a role in trying to encourage and even muscle the Palestinians into negotiating in good faith with Israel at a peace conference. But whether or not that dubious plan is put into action, Trump’s presence in Jerusalem is also being scrutinized for any hint that the United States is prepared to acknowledge his stay at the King David Hotel will be time spent in Israel’s capital.

Though Trump repeatedly pledged during the 2016 campaign he would move the U.S. embassy from Tel Aviv to Jerusalem, it hasn’t happened yet. It’s still possible he could do it, perhaps even when he’s there only a day before Israel celebrates Jerusalem Day – which this year marks the 50th anniversary of the city’s reunification during the Six Day War. But few in the know think this is going to happen.

In recent weeks, Trump has been listening to his more mainstream advisers, such as Secretary of State Rex Tillerson and Secretary of Defence James Mattis. This has led him to take a more realistic attitude toward NATO and the conflict in Syria. It’s also likely to mean he will heed their warnings that an embassy move would set off riots in the Muslim world rivaling those occurring in reaction to a Danish newspaper publishing cartoons of the Prophet Muhammad. That’s a price that not even Trump may be willing to pay to keep a promise.

If so, then those pro-Israel activists who pushed hard to pin down Trump on the embassy issue last year will probably write it off as just a noble effort that failed. But by putting the question of Jerusalem’s status back on the national agenda and then failing, they will have made a mistake that could set back Israel’s cause and boost efforts to re-partition the capital.

Jonathan S. Tobin is opinion editor of JNS.org and a contributing writer for National Review. Follow him on Twitter at @jonathans_tobin.