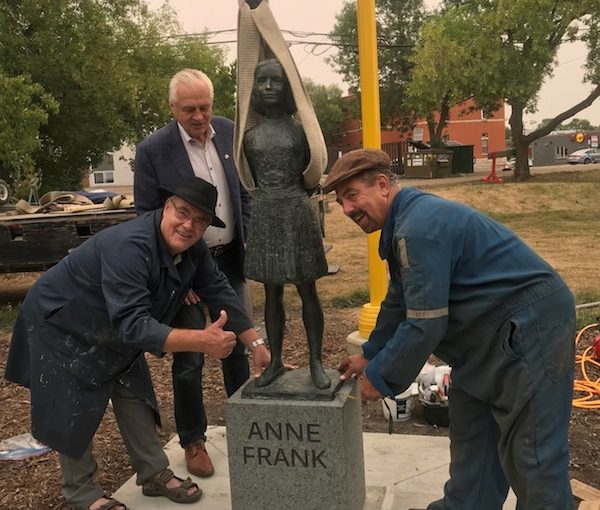 On Aug. 8, 2021, officials in Edmonton unveiled the first sculpture of Anne Frank anywhere in Canada. The world’s newest memorial to her – a life-sized bronze sculpture gifted by the Dutch Canadian Club, based in Alberta – now sits in a park in Edmonton. It is a replica of one that stands in Utrecht, Netherlands.

The unveiling marks the 75th anniversary of the liberation of Holland in the Second World War, and gives thanks to the Canadian soldiers who freed their country from Nazi Germany in 1945. But there’s a second meaning behind the timing – and it’s a strange coincidence. On this August weekend, 77 years ago, Nazis raided the secret annex in Amsterdam, where Frank and her family had been hiding for nearly two years, and arrested them. A few days later, they were sent to the Westerbork transit camp and, later, they would be shipped to Auschwitz.

On the Aug. 9 CJN Daily Podcast (ellinbessner.com/the-cjn-daily-podcast), readers can hear from the people who pushed for the statue and raised $75,000 to create and erect it, as well as from Gillian Horwitz, who runs Holocaust programming for the Jewish Federation of Edmonton, and Steve Shafir, the federation’s president, who were at the unveiling ceremony in person. 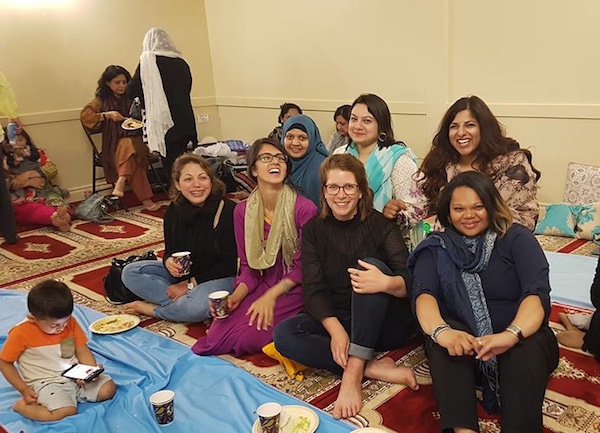 Members of Sisterhood of Salaam Shalom enjoy a Ramadan Iftar dinner together at a local mosque. Naz Qureshi is at top right and Rabbi Gila Caine is seated in the front row, second from the right. This photo was taken before the COVID-19 crisis. (photo from Naz Qureshi)

Sisterhood of Salaam Shalom, which works with Jewish and Muslim women to combat hate, stereotyping and prejudice, has chapters in the United States, England and Canada. After a trip to Israel in 2017, Naz Qureshi, who is Muslim and whose parents are from Pakistan, decided to start up a Salaam Shalom chapter in her own city, Edmonton.

“I’ve been to Israel/Palestine twice,” Qureshi told the Independent in a recent interview. “It’s one of my favourite places to go. I love to see the political dynamics, because … I can weave in and out of both sides. I’m Muslim, so the Palestinians get me. But yet, I’m very Western, so the Israelis get me, too. I don’t wear a hijab. I’m not seen as a threat. I can see it from both sides. I think that, because I’m also a South Asian Westerner, of course, the conflict is near and dear to my heart and I’m passionate about it, but I’m not as invested in it as a Middle Easterner would be.”

During Qureshi’s 2017 visit to Israel, she said, “Completely by chance, this Orthodox rabbi and I started talking about religion and we ended up becoming extremely good spiritual friends. We realized that our faiths have so much in common.”

On her way back to Edmonton, via Toronto, Qureshi happened upon an ad for Sisterhood of Salaam Shalom and reached out when she got home. She contacted Temple Beth Ora’s Rabbi Gila Caine.

“Gila was completely interested,” said Qureshi. “I said, ‘OK, this is perfect, because you’re a rabbi and you can bring the Jewish women, and I can bring the Muslim women.’”

Each leader managed to find a half dozen interested women from their communities, and they began meeting on a monthly basis in homes and places of worship.

“Initially, you don’t broach the Israel-Palestine topic, because you’re just going to have a breakdown of communication right there,” said Qureshi. “Instead, we started with similarities. And it’s not just like, ‘OK, let’s eat some baklava and hummus.’ No. You delve into really interesting topics, like our holidays, our festivals. Salaam Shalom provides you with a whole binder if you’re not able to work on your own topics. They’re really good at guiding you.”

By eliminating stereotypes and hate, and developing friendships, participants begin seeing the other’s points of view and standing up for one another.

To help create intimate friendships, chapters are kept small. “You can’t hate somebody who you end up liking,” said Qureshi. “And then you think, ‘Wow, this person is a lot like me.’

“I think that when that happens – I’ve seen it over and over again from both sides – it creates really interesting dynamics. When you see that wall fall, it’s like the Berlin Wall cracking and this realization that, ‘Oh, my God … this person is not evil, they’re really interesting and fun to be around.’”

At one of the meetings, members were asked to share a personally meaningful story from their faith tradition. “I remember one, I think it was my favourite,” said Qureshi. “We were at Gila’s house and Gila shared about the Kiddush cup. I’d brought zamzam water (Muslim blessed water) and explained its significance. We ended up toasting zamzam water in the Kiddush cup and it was amazing…. When we left, we all had that warm fuzzy feeling in our hearts.”

Just before the coronavirus outbreak, the group had planned to have an event to assess participants’ interest in continuing, but the gathering had to be postponed.

“What I really like about Salaam Shalom is the intimate, smaller group discussions,” said Qureshi. “You get past the formalities, past your name and what do you do, and you delve into real issues and gain an appreciation and learning from one another.

“There is so much Islamophobia and antisemitism on both sides and I really wish that people would just go out and make a Muslim or Jewish friend, and then you can see this closeness that exists.

“I think it’s maybe also so important for women especially to be doing this work because it’s easier for us … no matter where you fall on the spectrum, liberal, conservative … we tend to be more open.

“We can portray Muslims not in this negative stereotypical light, too,” she added. “We’re not all terrorists, we’re not all crazy…. It’s really important to sow those seeds wherever you can.

“Going back to my Israeli friend, the Orthodox rabbi, he feels so close to Palestinians he knows now … whereas before, he was a completely different person. Now, I think, from knowing me and when we talk about religion and the shared stories and our deep love of God and respect, he feels this closeness to Palestinians.”

After Qureshi’s phone interview with the Jewish Independent, she shared a message she received from her rabbi friend, which read: “The other day, when I came home after one of my rounds, I tried to park the minibus in the usual spot and there was this guy who told me that he cannot clean the area because I park there, so I parked somewhere else. Later, I go over to him and ask what days he comes to clean, so I know when not to park. He was a Muslim and he said, ‘I like you.’ He said he recognized me from before. Apparently, he used to sweep the area some time ago and remembers that I used to compliment him and say a good word. Anyway, he literally kissed me! It took me by complete surprise! Who would think of [a Muslim] kissing a Jew? Anyway, we exchanged numbers and now there’s another Muslim friend added to my list.”

Qureshi reflected, “Hearing this message made my Monday morning. I got off the train feeling elated and walked the remaining blocks to work. The sun shone a little brighter and the cooling breeze appeared to be sent directly from the heavens above! The scene was playing over and over in my mind. ‘Who would kiss a Jew?’ Why, a Muslim could and would kiss a Jew! And what had elicited such a strong emotional response? That a Jew could and did act kindly to a Muslim.” 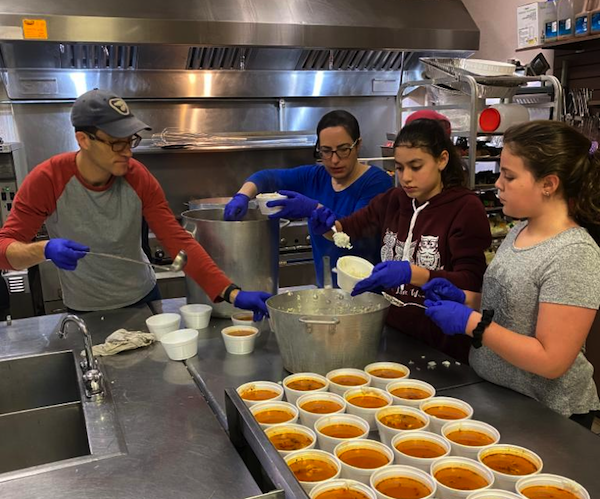