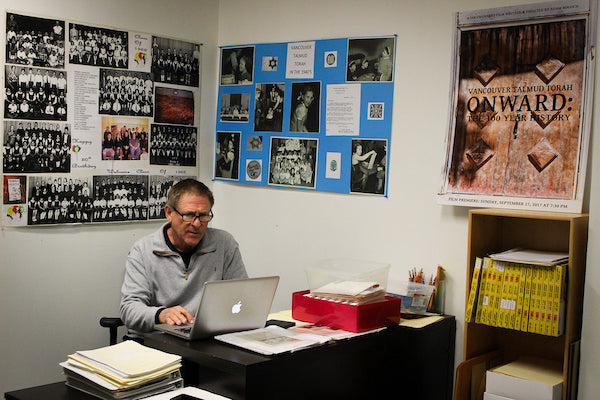 David Bogoch is keeper of the Vancouver Talmud Torah archives and chair of the school’s alumni fund. (photo from facebook.com/vttschool/photos)

David Bogoch is on the board of the Vancouver Talmud Torah Foundation. He is also the collector and keeper of the school’s archives. Previously, he was on the school’s board of directors for eight years – a position he took for a unique reason.

“At my dad’s shiva, the president of the board at that time, David Kauffman, tapped me on the shoulder and asked if I would be on the board at the school,” explained Bogoch about how he became involved. “At that time, with my father’s spirit in the room, I felt I had no choice but to say yes. Talk about timing.”

Dr. Al Bogoch was the guest of honour at Vancouver Talmud Torah’s 50th anniversary at its current location, in 1998. He was recognized for his more than 40 years of dedication to the school. He acted in many capacities over those years, including as president of the board of directors, as one of the founders of the VTT Foundation, which was established in 1974, and as a main driving force of four of the school’s expansions. On the occasion of the golden anniversary, the Alumni Endowment Foundation was launched.

In addition to his duties as archivist, David Bogoch is also chair of the school’s alumni fund.

“The board was portfolio driven, so I chose alumni,” he told the Independent. “I inherited the job from Carla van Messel. I figured it would be the least political and most fun. I knew at least 100 alum I could call and it all started from there.”

In going through the boxes in his father’s basement, Bogoch found tons of old Talmud Torah paperwork. “He had kept everything to do with his time on the board in the 1960s,” said Bogoch. “Other past presidents had given him their collections and, together, amassed a lot of what is in the archives today.

“Today, the archive has thousands of photos and documents, from 1918 to the present,” he continued. “There are so many interesting stories which make up the 100-plus years of the school history. I looked up every issue in the library of the old Jewish Western Bulletin and the Jewish Independent to help tell the history of the school and the community of the times. Where would we be without the ability to search through the newspaper of old?”

While many stories have captured his interest, Bogoch said, “One story which caught my attention was in the board meeting minutes from 1944. The community wanted to build its own new Talmud Torah day school but were unable to because of lack of building supplies because of the world war. They also wanted to buy a school bus but couldn’t because of gas rations due to the war.

“Some people like jigsaw puzzles, others like bridge or golf,” he said. “My game of choice is the history of the school and all the people who either attended or were involved with the school. I love the good stories of friendship; I suffer when I hear the bad stories of tough times for students or parents or teachers. By knowing what has gone on in the past, I hope to impart those stories to the people of the present and the future, so we can try to avoid mistakes made before.”

Some of those stories are included in the one-hour documentary Vancouver Talmud Torah Onward: The 100-Year History. Written and directed by Bogoch’s son, filmmaker Adam Bogoch, the documentary was released in September 2017, as part of the school’s centenary celebrations. It can be viewed at youtube.com/ watch?v=ifoAqk3EKb0.

VTT obviously means a lot to David Bogoch, who also attended the school. “All of my lifelong friends came from Talmud Torah,” he said. “Most alum I come in contact with also share the same experience – our ties to the Jewish community stem from our shared experiences of school years. Between school, shul or camp, that is where we forge our community ties that bind.”

“The school,” he said, “is currently trying to put the photos and archival material on the school website so that everyone can search through and find the memories of their time, or of their family’s era.

Writer and director Adam Bogoch, left, and VTT Alumni Fund chair David Bogoch at the première of Vancouver Talmud Torah Onward: The 100-Year History on Sept. 17. For those who missed the sold-out screening at the Norman and Annette Rothstein Theatre, the documentary can be watched online, via talmudtorah.com/vtt-onward-100-year-history or on YouTube. (photo by Jennifer Shecter-Balin)

On Sept. 17, Vancouver Talmud Torah will mark its centenary, celebrating “its humble beginnings as an afterschool cheder to the VTT of today – a modern, state-of-the-art facility with the capacity to educate generations of Jewish children in the decades to come, just as we have been doing for the past 100 years,” head of school Cathy Lowenstein told the Independent.

The focal point of the celebratory evening is the documentary Vancouver Talmud Torah Onward: The 100-Year History, written and directed by Adam Bogoch. The event sold out in three hours, said David Bogoch, Adam Bogoch’s father and chair of the VTT Alumni Fund, which supported the project.

David Bogoch was on the VTT board for seven years. He served as alumni chair when he was a board member and it’s a position he retains.

“It is my hope that anyone who attended the school could reconnect with the school and their classmates through the alumni organization,” he said in an interview with the Independent. “It is not an association, nothing formal, just a large family of friends, past students and parents of students.”

The alumni fund, he said, “receives donations and, in turn, makes gifts to the school. Over the last few years, the alumni fund installed an alumni garden at the corner of Oak and 26th, purchased band instruments for the students of the school, and purchased display cases for use in the hallway of the school.

“In an effort to get more people excited about reconnecting with the school, I felt it was necessary to document the 100-year history of the school, and to celebrate the 100th anniversary of the school appropriately. It is important for future parents, board members, staff and administration, and the community at large, to know how much of a struggle it is to keep the school open, paid for, able to properly care for and educate the children who walk in the door. It takes great effort from many individuals, and the full support from the entire community to keep Talmud Torah doing its best.

“We must also recognize all of the leaders of the past and the people who helped the school become what it has become,” he added, “so the documentary was a natural fit. The film is a permanent reminder and a wonderful gift to the school.”

The film was produced independently from the school, said Lowenstein. While they knew an historical piece was being made, she said, “the fact that it was completed to coincide with VTT’s 100th anniversary year was sheer good fortune. Many of us were interviewed, but we actually had no idea how and when it would all come together.”

Lowenstein said the production of the film “is close to the heart of David and Adam, who are the son and grandson of the late Dr. Al Bogoch, z’l, a former VTT board chair who, through passion and conviction, single-handedly engaged our community to burn our last mortgage. Adam is a wonderful storyteller and he does his family proud through the recounting of Talmud Torah’s fascinating story. VTT Onward is a vitally important historical record of our school.”

Some members of the VTT leadership team were shown a rough cut of the film and, said Lowenstein, “while we might not endorse everything that’s said in the film, it would be an honour to kick off VTT’s 100th year by showing it to our community.”

The title of the film, she said, captures “the very essence of what our school is about. We are always looking to fulfil our mission of academic excellence and nurturing lifelong learners. We have a responsibility to look ahead, to plan and vision forward to ensure that we are offering the best possible in core academics and Judaic studies to our students and families.”

But looking back is also necessary. “The film relies on archival photographs and live interviews with some of the very community leaders who ensured that the school remained strong and viable through some exceedingly difficult periods,” she said. “I appreciated learning about different perspectives from many community stakeholders. It is not often that one has the opportunity to hear so many different points of view from those who have been intimately connected to the school.

“The challenges our predecessors faced are the very same challenges we also face today – and that Jewish day schools across North America confront as well. I found it encouraging to see the ebb and flow and highs and lows of this institution, yet with the reassurance that VTT is a treasured community asset that is vital to the growth, strength and future of our community.”

Stressing her pride in the school’s faculty, Lowenstein said, “Although our expanded new campus allows us to do things we never imagined possible, what happens inside the four walls of the classroom (and now in our many collaborative spaces) is still our top priority. I have a team of key professionals dedicated to ensuring that the academic and Jewish experience at VTT remains relevant and vibrant. We are continuously looking to improve our offerings, and each new school year brings new ideas and new innovations. This, to me, is the hallmark of a responsive and reflective school.”

As for some of the current challenges, Lowenstein said, “As the community knows, we have just completed the building of a magnificent new campus and now we must finish paying for it. Paying down the interest on our loan is one of our key priorities to remain financially sustainable. One of our greatest challenges – and it applies to almost every independent school on Vancouver’s West Side – is the decreasing number of school-age children in the catchment due to Vancouver’s high housing costs. This is an issue that VTT, [Jewish] Federation and so many other Jewish community agencies are exploring and trying to address. Our board of directors is also committed to ensuring VTT remains an affordable option to middle-income families.

“Ultimately, our goal is to ensure we meet the diverse needs of our VTT families. We want students to receive their Jewish education at VTT from the early years until they become proud graduates in Grade 7.”

“For 100 years,” said David Bogoch, “the school has been a focal point of the Jewish community. Students make lifelong friends from their years there. They learn so much about being Jewish and what that means. The students become successful leaders throughout the entire community as they grow up, and the entire community benefits from the school.”