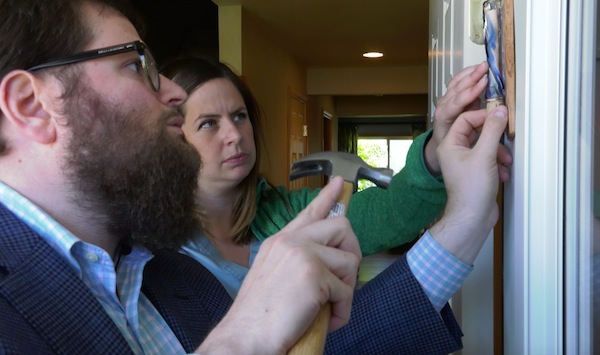 A still from The Rabbi Goes West: one of Chabad-Lubavitch Rabbi Chaim Bruk’s goals is to see a mezuzah on the door of every Jewish home in Montana.

In their documentary The Rabbi Goes West, filmmakers Gerald Peary and Amy Geller have succeeded in a difficult task – providing a balanced, respectful and entertaining glimpse into what happens in a state with a small, minimally affiliated Jewish community when Chabad-Lubavitch arrives.

A branch of Chassidism, Chabad-Lubavitch was started some 250 years ago in White Russia, in what is now Belarus. After the Holocaust, the movement began its outreach in earnest, trying to reach non-religious and unaffiliated Jews almost literally everywhere in the world. There are now approximately 5,000 Chabad emissaries in more than 90 countries.

While emissaries may receive some seed funding to start a new centre, they must raise their own funds to stay active. In 2006, Chabad Rabbi Chaim Bruk ventured from Brooklyn, N.Y. – Chabad headquarters is in Crown Heights – to Bozeman, Mont., to scout it out. Encouraged by the growing population and the amount of tourism, Bruk returned to Crown Heights to get the OK to set up a centre there. Given the green light, he and his wife Chavie did just that in 2007. The rabbi’s goal? To ensure that every one of Montana’s 2,000 Jewish families has a mezuzah on their door. One of the ways in which he makes headway on this task is by traveling all over the state, asking safe-looking strangers (who are the vast majority, he says) whether there are any Jews in the area and then, when he finds them, boldly introducing himself and his purpose.

As charming and open as Bruk seems, his presence, the ultra-Orthodox Judaism to which Chabad adheres and the movement’s expansionist mission – two more Chabad centres have opened since the Bruks arrived – are not universally welcomed by the Montana Jewish community. The Rabbi Goes West includes interviews with fellow rabbis Francine Roston (the first Conservative woman rabbi to lead a large congregation), who came to Montana from New Jersey in 2014; Allen Secher (co-founder of Chicago’s first Jewish Renewal congregation), who came to Montana after he retired in 2000 but retook the bimah when he found out he was the only rabbi in the state at the time; and Ed Stafman (a former trial lawyer), who came to the state from Florida. The film also includes commentary from local Jews from all four congregations.

While Bruk has limited involvement with the other congregations and rarely, if ever, joins their events – he contends that most of them violate some aspect of Judaism, such as the laws of kashrut, for example – the Jewish community does unite, along with other religious and secular groups and individuals in the state, when faced with neo-Nazi threats and cyberattacks.

The Rabbi Goes West is a documentary well worth seeing, both for its content and the way in which that content is presented. Sponsored by the Vancouver Jewish Film Centre, it screens at the Vancouver International Film Festival Oct. 7, 6:30 p.m., at Cinémathèque, and Oct. 8, 11:30 a.m., at International Village 10. For the full festival lineup, visit viff.org.