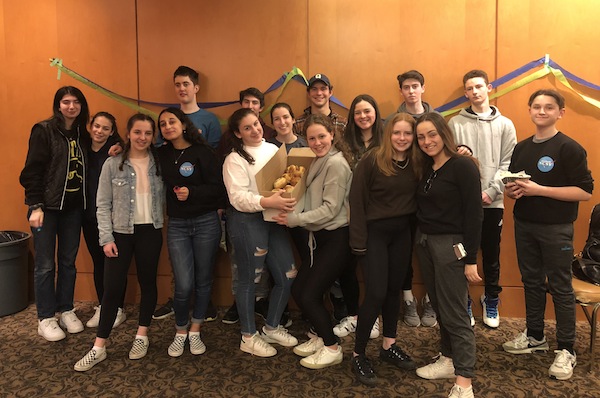 Teens from CTeens, NCSY and BBYO joined together for the Not Your Bubbies’ Babka Bake at Congregation Schara Tzedek on March 7. (photo from CTeens)

On March 17, teens from three local organizations – CTeens (Chabad Teens), NCSY (National Conference of Synagogue Youth) and BBYO (B’nai B’rith Youth Organization) – joined together for a mitzvah. Around 30 teens from Richmond and Vancouver gathered for the Not Your Bubbies’ Babka Bake at Congregation Schara Tzedek, where they learned how to braid challah and make chocolate babka.

This wasn’t an ordinary get-together, it was a mitzvah event, timed to help celebrate Purim. The challot went to seniors in the Light of Shabbat Program, and the teens took the babkas home.

The Light of Shabbat Program is run by Chabad Richmond, in partnership with the Kehila Society. Every other week, a group of volunteers makes and delivers full kosher meals, along with Shabbat candles and grape juice, to Richmond seniors who are alone on Friday nights. To find out more about the program, visit chabadrichmond.com/lightofshabbat. Part of the meal is homemade challah, which was made by these teens as part of the mishloach manot (also referred to as shalach manot), or Purim food baskets, given on the holiday.

It’s a mitzvah and tradition for adults to send a gift basket of ready-to-eat foods to at least one friend during the day of Purim. The baskets should include at least two foods, often hamantashen, chocolate, fruit, cookies or candy. The source of mishloach manot is the Megillah, or Book of Esther, which talks about “sending portions one to another, and gifts to the poor.” The idea of sending gifts of food on Purim is to strengthen our bonds of friendship with fellow Jews, as one theme of Purim is friendship and unity.

Aiden, a 15-year-old CTeen, said the reason he joined the Not Your Bubbies’ Babka Bake event was to meet other Jewish teens, and help out. “I love to bake,” he said, “and it makes me feel good knowing that the challahs we’re baking are going to seniors in our community.”

A CTeen for two years, Aiden wanted to feel more connected to the Jewish community, so he started going to shul at Chabad Richmond. Then he met Rabbi Chalom Loeub, who leads the CTeen program. Among other things, the CTeens get together every Sunday to bake cookies and cakes for seniors. Aiden also mentioned going to the CTeen International Shabbaton in New York, which he said was “incredible.” He’s now trying to get other Jewish teens involved in CTeen, too.

Jillian Marks, 17, was another participant in the challah and babka bake. She came to the event through her involvement with BBYO. As a youth leader for the Vancouver chapter, she wants to create “a pluralistic environment for everyone who wants to meet other Jews and feel safe and be whoever they want to be.” BBYO holds different events, all of which have some Jewish element to them. For this particular event, BBYO joined with CTeens and NCSY to “work together, not compete. You can be in all of the groups, not just in one of them,” said Marks.

Each of the youth groups emphasizes leadership skills, and many of their events are teen-run initiatives. Marks added that “the purpose of this challah/babka bake was not just to meet other Jewish teens, but also to volunteer and help out the community.”

All the teens echoed the same sentiments – that making challah for seniors is a mitzvah and that it feels good to volunteer. It’s a nice perk, they said, that they also get to meet other Jewish teens, adding that they would “get the word out” to their friends.

Several teens from NCSY, including Neer, 16, Jessie, 17, and Romy, 16, also attended the challah and babka bake. They run Live to Give, a social action outreach program for the local NCSY chapter. One of their projects is to take homemade baking to Louis Brier Home and Hospital residents. One of the teens said, “For seniors who have no family, or very little, it’s special for them, and it brings a lot of light to their life.”

Members of the NCSY chapter also make and deliver food to people in Oppenheimer Park. “It’s a great opportunity to help out in the community and it’s very rewarding,” said the teen.

The Jewish Community Centre of Greater Vancouver has partnered with BBYO to provide expanded opportunities for teens around the Lower Mainland. The partnership will enhance the connections of Greater Vancouver Jewish teens and link the local community to BBYO hubs across Canada – in Montreal, Toronto and Winnipeg – and in more than 30 countries around the world.

The JCC-BBYO connections were forged earlier this year at the JCC Festival Ha’Rikud closing party hosted by BBYO. With more than 80 teens from Vancouver, Miami and Israel, the JCC set the stage for fun and teen involvement. Since the party, a group of teens from Vancouver, White Rock and Richmond formed a leadership team and the JCC is looking for a professional to support them.

In partnership with BBYO, the JCC is currently seeking to fill the role of BBYO city director and JCC teen coordinator. The role will focus on programs that foster engagement and create meaningful connections among high school teens in the community. The professional will liaise with Jewish and secular community organizations working with youth, and will build BBYO chapters throughout the Greater Vancouver area.

“Each year, I get to see teens around the Jewish community grow and connect,” said Shirly Berelowitz, director of children, youth and camps at the JCC. “The JCC teen department looks forward to expanding these opportunities in our new partnership with BBYO. Our goal is to become a hub for Jewish teens to connect with each other in Vancouver and around the world. I couldn’t be more excited for the JCC to take on this role!”

For more information on the coordinator position, contact Berelowitz at 604-257-5111 or [email protected].

Eighteen-year-old Bernie Kozlovsky spent from sundown to sunrise on a boat with 16-year-old Sonia Rosenbaum in the summer of 1972.

“We talked until dawn,” Kozlovsky recalls about that summer at the Orthodox Jewish NCSY overnight camp in northeastern Maryland. Kozlovsky worked in the camp kitchen. Rosenbaum was a camper. From that summer forward, neither dated another individual. Forty-three years later – including 39 years of marriage, six children and seven grandchildren – Kozlovsky attributes his successful relationship to the spark that formed during his summertime experience.

Not much has changed.

Today, the (camp) fire is still burning at Jewish summer camp. Dating and marriage are byproducts of summers spent banging on the table during Birkat Hamazon (Grace after Meals), engaging in loud and intense games of color war, and celebrating Jewish culture with Hebrew plays and folk-music campfire sing-alongs.

No one is pushed to date at Jewish summer camp, said Lauren Ben-Shoshan, who met her Israeli husband, Alon, as a counselor at URJ (Union for Reform Judaism) Camp Harlam in Kunkletown, Penn., in 2004. The couple now lives in Israel.

“Camp is a positive place for Jewish learning, physical activity and connecting with the outdoors. No one wants campers to feel bad because they didn’t find their spouse when they were 15, 19 or 22. But there is a covert understanding that [marriage is] a nice byproduct of Jewish summer camp, when it happens,” said Ben-Shoshan, who is also a Jewish educator.

It occurs more often than many realize. According to Camp Works, a report released in 2012 by Foundation for Jewish Camp, Jewish adults who attend Jewish overnight camp are on average 10% more likely to marry within the Jewish faith than their peers. The 2000-01 National Jewish Population Study found that number to be higher, with 78% of individuals who attended Jewish summer camp in-married, as opposed to 62% of their non-camper peers.

What’s the secret sauce? Is it that romantic Shabbat at sunset by the lake or in the secluded woods? That’s part of it, but it is more likely a result of the “intensity” of the camp experience, Ben-Shoshan believes.

“The days last forever, but camp feels like it only lasts a minute, so even if camp is only two months, these are two very intense months,” she said. “You see the campers and counselors in stressful situations, how they interact with peers and with the kids, the meals, how they interact with co-workers. It is all these things that happen in life, that could take several months in the ‘real world,’ you see within a week at camp.”

Jewish summer camp focuses heavily on community-building, noted Aaron Bogage, who attended the BBYO International Leadership Training Conference for several summers and now works at the overnight BBYO Chapter LTC. He said there are always “quite a few couples per session,” explaining that these relationships form because everyone is “extremely open” with each other and open to meeting new people. “Everyone is genuinely excited to get to know the rest of the teens.… There is a sense of community that comes from camp,” he said.

One can start to pinpoint new couples, according to Bogage, by looking at who sits where during meals and what campers do during free time. Bogage has not met his significant other through camp, but his good friend met a girl last summer from another state. They are still together despite the physical distance between them.

Jen Silber, executive director of Habonim Dror Camp Moshava in Street, Md., said there is a focus at camp on building healthy peer relationships. “We want [campers] to learn about communication, how to express their needs in relationships, feel confident being themselves and develop trust,” she said.

Silber, who met her own husband as a camper and then staffer at Moshava, argues that friendships and romantic relationships that people form at summer camp tend to be “deeper” and more authentic than those forged at school or in other environments. Campers and counselors feel accepted for who they are, she said.

Maayan Jaffe is former editor-in-chief of the Baltimore Jewish Times and a Kansas-based freelance writer. Reach her at [email protected] or follow her on Twitter, @MaayanJaffe.