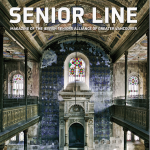 During the 20th century, thanks to advances in medicine, technology and quality of life, average life expectancy in the Western world increased by 30 years. Adults of the retiring age are now the fastest-growing segment of the population. The 2016 Canadian census showed more seniors (5.9 million) than school-age children (5.8 million). And the majority of these seniors are healthy and active, willing and able to share their knowledge and experience with the wider world.

Unfortunately, many people still apply the same negative stereotypes to older folks as we did decades ago: wrinkled, grumpy, fragile, forgetful, out of touch with reality, a burden and so on. Although “wrinkled” is mostly true, the rest is not, overall. We, society at large, need to change our views and policies towards the elderly, and how we treat the senior population.

“The most pressing issues seniors face are loneliness and isolation, retaining financial independence, staying involved and being physically active,” Ken Levitt, president of the Jewish Seniors Alliance of Greater Vancouver (JSA), told the Independent. He added to that list the lack of affordable or subsidized housing for seniors, inadequate nutrition, and the need to successfully manage personal health problems. He talked about protecting seniors from financial predators, including greedy relatives and unscrupulous investment counselors.

“This broad scope of issues affects all seniors, not just Jewish,” he said, “And the solutions should be all-encompassing, on the federal level. Poverty is a symptom of a greater problem, and we must address the cause. What we do now is just patchwork, temporary solutions.” 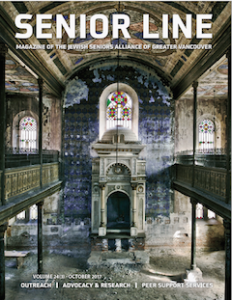 JSA does what it can to ease seniors’ problems, given the limits of its budget. It has about 400 registered members and publishes its own magazine, Senior Line, three times a year. “The articles deal with issues and challenges relating to seniors,” Levitt explained. “These issues are not only discussed, but we make recommendations for their amelioration.”

The alliance also offers outreach programs, advocacy and research into the problems of seniors, and peer support services. “JSA advocates senior issues through a number of organizations, including the Council of Senior Citizens Organizations of B.C., the B.C. Health Coalition and the B.C. Poverty Reduction Coalition,” said Levitt.

About JSA’s peer support services, Levitt said, “We have 150 trained volunteers in the peer support services. Each one of them undergoes 55 hours of special training – 11 five-hour sessions. These volunteers offer friendly visits to seniors who are lonely. They answer phone calls. They can’t solve all the problems by themselves but they can help others to solve a variety of problems. They help those in need to reconnect with community. They provide bereavement support, when necessary. That they are seniors themselves adds credibility to their recommendations.”

Of course, there is always more to be done. “We have more demands for our services than we can meet,” said Levitt. “If we secured more funding, we could train more volunteers and expand the peer support services. We could hire more staff.”

JSA is engaged in networking to start something similar in Vancouver. “We don’t have to start all these programs at once. We can start small and build up from there,” said Levitt. “Bits and pieces of such programs are already in place at different locations and organizations – we should concentrate them in one place. But, to establish such a centre in Greater Vancouver, there would need to be more cooperation amongst agencies, a willingness to share their services and resources.”

Rivkin added, “We provide JFSA with funding for financial support to clients, including assistance with food vouchers and rents. A growing number of those clients are seniors.”

She explained that, while 14% of the funds “are specifically directed toward programs serving seniors, approximately 30% of our funding goes to social services. Seniors who are recipients of social services benefit through these programs also.”

And Federation is trying to help local seniors who face poverty. “According to the 2011 National Household Survey,” Rivkin said, “there are approximately 4,500 seniors in our community, and 16% of them have been identified as living below the low-income cut-off. The majority of them are older, unattached women. We are looking at issues of seniors and poverty through the Food Security Task Force and we intend to hold a forum on seniors in 2018 to gather community priorities.”