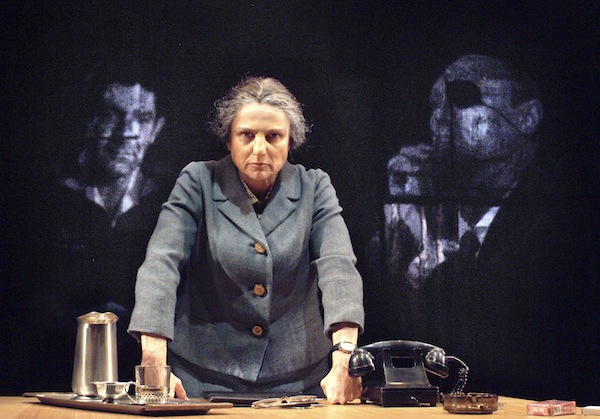 “How does a housewife decide between generals?” asks Golda Meir (played by Tovah Feldshuh) in Golda’s Balcony. In this instance, she must decide between the counsel of David (Dado) Elazar, her chief of staff, left, and Moshe Dayan, her minister of defence. (production still)

Tovah Feldshuh is incredible to watch in Golda’s Balcony, The Film. Not just in her passionate and sympathetic portrayal of Golda Meir, Israel’s prime minister from 1969 to 1974, but in her depiction of all 45 characters in William Gibson’s one-woman play. She’s Meir, David Ben-Gurion, David (Dado) Elazar, her husband Morris, Holocaust survivors and Israeli soldiers, among many others. She moves as easily between the personalities as a child raised in a multilingual household moves between languages. And with powerful effect.

Golda’s Balcony, The Film has two screenings at the Vancouver Jewish Film Festival – March 1, 1 p.m., and March 2, 3:30 p.m., at Fifth Avenue Cinemas. See it. You will have a more nuanced understanding of Meir, as well as of Israel, its origins and the struggles it has faced and will face. Gibson’s text is superb; it is engaging and insightful, with enough humour along the way that you’ll be able to breathe on occasion, as Meir deals with the existential crisis of the Yom Kippur War. Fluidly switching from wartime to other parts of her life, the play depicts, if nothing else, the stressful, heart-wrenching, thankless job that is being prime minister of a country that is constantly under threat.

The film is a recording of the play’s soldout Off-Broadway première on May 4, 2003, at the Manhattan Ensemble Theatre, presented by Issembert Productions. After a four-month soldout run at MET, the show moved to Broadway, and the Helen Hayes Theatre, where it ran for 15 months, making it, apparently, the longest-running one-woman show in Broadway history. It has won countless awards.

The set is relatively simple. A table with a couple of chairs on a tile floor. On the table, a dial telephone, a pitcher and water glass, an ashtray, cigarettes. Light shines on the table from the right, as if from a window. The backdrop is a wall of reddish stone or metal slabs of varying sizes that protrude outward. Images are projected onto the wall or chairs when relevant, giving the audience a visual of the person Meir is talking about, or that Feldshuh is portraying – though it is hard to see these images in the film version. To the side and a step down is a small piece of stage covered in dirt, with a few rocks, which acts as refugee camps in Cyprus, the kibbutz on which Meir lived for a time, Russia when Meir visits on a diplomatic tour, etc. The focal point for the entire production is Feldshuh.

The play begins in darkness, a man chants a prayer, the words “Golda’s Balcony” appear briefly on the wall. Thunder claps, lightning flashes, gunshots ring out, then darkness again, but the sound continues: guns firing, bombs exploding, planes overhead. A housecoat-garbed Golda, sitting at the head of the table, strikes a match and lights a cigarette; the lights rise a bit and calmer music prevails.

“I’m at the end of my story,” says Golda. “I’m old. I’m tired. I’m sick. Dying, the doctors tell me. The picture you have of me as Mamaleh Golde, who makes chicken soup for her soldiers, it’s a nice picture. And I do make chicken soup. But let’s empty it all out for keeps right now because, at the bottom of the pot, is blood. At the bottom of the pot is the question that won’t die. I can do without that music!” she yells. It stops. The lights come on more fully, as Golda then starts to relate the story of her first voyage to Palestine, with her husband, in 1921 – 52 years later, she would become prime minister.

“I remember, starting with a phone call, that woke me up at four o’clock in the morning. Saturday, Yom Kippur, 1973,” she says, as she closes her eyes, looking exhausted, her right arm holding up her head, the left one sliding off the table. The phone rings. Startled, she answers it, hearing the news that Egypt and Syria have attacked Israel. As she takes off the housecoat, Golda is in her familiar muted woolen skirt suit; energy, anger and fear all come to the surface as she relates her generals’ differing views as to what Israel needs to do. Dado: attack! Moshe Dayan: don’t be seen as the aggressor! “How does a housewife decide between generals?” she asks.

Of course, she does decide. But the agonizing and tension-filled process leads her – and Israel – down some very dark paths and the play masterfully depicts her sadness, anxiety and frustration; the sacrifices to her family, her health, as well as to others. Throughout the many narratives, it is the story of the Dimona nuclear facility to which she will get, the story that haunts her, that took her to hell; the story she needs to gather the strength to tell.

Thunder, lightning and gunfire divide the scenes in the whirlwind of action that Golda describes, her domestic life almost as tumultuous as her political life. We see her humanity, but also her toughness. Luckily, she never had to answer the question that “won’t die”: if Israeli forces hadn’t been able to cross the Suez Canal and if the United States had not come through with the needed military aid, would she have ordered the dropping of the nuclear bombs with which she had armed Israel’s planes?

Golda’s Balcony is a must-see in a festival with many excellent films. For the full schedule, visit vjff.org.